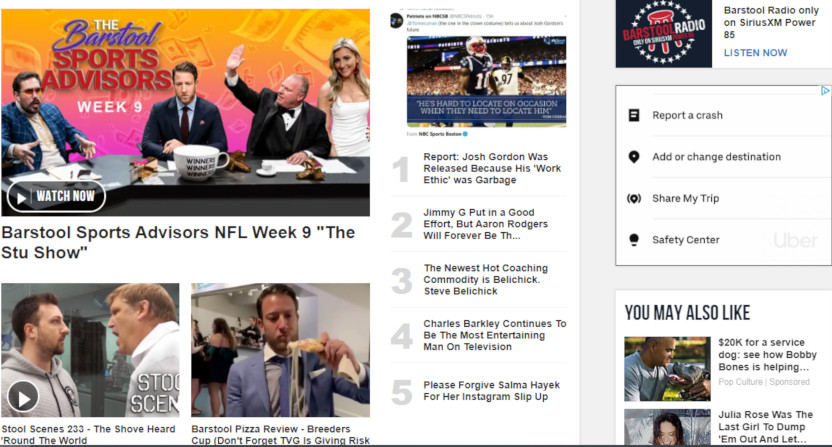 It sounds like Barstool Sports may soon have some new ownership. As per Ryan Glasspiegel of The Big Lead, The Chernin Group (which bought a majority stake in the site in January 2016 for several million dollars) is exploring a sale to a gambling operator.

The Chernin Group is exploring the sale of Barstool Sports to a gambling operator, two sources have told The Big Lead. One source said talks were in advanced stages (as always with these things, until they’re finalized with pen to paper there is the possibility that they fall through). Barstool founder Dave Portnoy and CEO Erika Nardini did not immediately respond to a request for comment.

Right now it is unclear which gambling operator is the most likely suitor for Barstool, and whether Chernin Group would be selling a majority or minority stake in the business.

Barstool has long been associated with some sports gambling content, including with their “Barstool Sports Advisors” betting show (which launched on TVG, owned by FanDuel parent Paddy Power Betfair, in September 2018, then later moved to Barstool’s own website) and with the free “Barstool Bets” program they launched this September. They also have a large and passionate fan following, so it’s quite conceivable that a gambling operator looking to draw in more new customers could buy either a majority or minority stake in Barstool in the hopes that their fans would then use the operator’s site.

Of course, Barstool also has created a lot of controversy over everything from harassment to stealing material to questionable content, and some of their past partnerships haven’t ended well. So there could be some blowback for a site that buys them. But plenty of brands still seem interested in working with Barstool, and the site has had ownership changes before without conflict; Chernin’s Mike Kerns said in 2016 Barstool founder Dave Portnoy would still have “100 percent control” of editorial after the sale, and that appears to have held up.

Also, keep in mind that Chernin invested an extra $15 million into Barstool back in January 2018. That makes for something else worth keeping an eye on with any sale price; has that investment paid off to a point where Barstool’s worth more than the total valuation of $10-15 million Portnoy claimed Chernin’s majority interest buy put it at back in 2016? There are certainly some more opportunities out there now for Barstool than there were then, thanks to the expansion of legal sports gambling and their efforts along those lines (and with a lot of gambling companies now looking to run ads and invest in content), but the degree to which that affects their valuation remains to be seen. We’ll see if this new sale happens, and if so, how it affects the site.