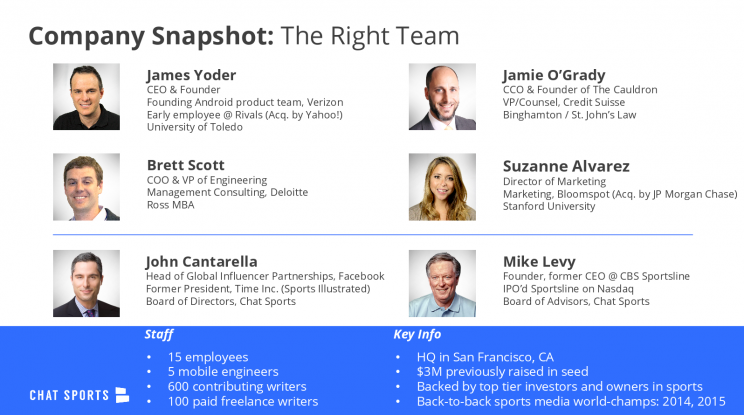 One of the more fascinating sports media stories in some time comes from Daniel Roberts over at Yahoo Finance, who’s dug into how Sports Illustrated parted ways with The Cauldron earlier this month and how that may have been impacted by Chat Sports’ earlier failed acquisition of The Cauldron. It’s a long and convoluted story, but well worth reading in its entirety. (It’s also worth looking at how Chat Sports preemptively fired back, with the company claiming an audience of over 100 million in January and founder and CEO James Yoder writing a piece called “Acquiring COMPANY X — A Cautionary Startup Tale, And How You Can Avoid Making The Same Mistakes” last week.)

The key thrust of Roberts’ story involves Yoder and Cauldron founder Jamie O’Grady initially agreeing in July 2016 that Chat Sports would acquire The Cauldron for $1.8 million, contingent on Chat Sports pitching the combined entity and raising a Series A round of investment funding. However, that then fell apart, with O’Grady telling Roberts Yoder was taking pitch meetings but not providing details on those meetings (which used the slideshow slide seen above) and Yoder telling Roberts The Cauldron wasn’t proving attractive to investors and O’Grady was trying to raise separate investment in The Cauldron.

Things seemed to be back on track in November when Yoder emailed O’Grady what appeared to be an executed term sheet from Chinese investment firm WI Harper, signed by partner Lee Chang. That sheet said WI Harper would invest $2 million as lead investor in a $5 million Series A round. In December, though, O’Grady got an odd e-mail, and everything started to blow up:

Receiving the WI Harper term sheet renewed O’Grady’s faith in the acquisition. And in December, O’Grady received an email from a lawyer claiming to represent Chat Sports. The email asked O’Grady for documentation on the structure of The Cauldron, now that the $1.8 million acquisition would be moving forward. The email was signed by Phillip Closius and sent from closiuslegal@gmail.com. (Yahoo Finance has seen the email.)

…O’Grady sent an email to Closius’s email address at the Baltimore law firm, responding to the email he had received from the Closius gmail address. A few hours later, O’Grady received a voicemail from Closius in which Closius said, “I’m just calling to tell you I have no idea what you’re talking about in this email about closing docs, so I’m sure you have the wrong person, please deal with it.” (Yahoo Finance has heard the voicemail.) O’Grady was alarmed. He reached Closius by phone and asked Closius if he knew James Yoder. He says that Closius told him yes, and that Yoder is a family friend, but that he does not represent him.

Next, O’Grady responded to the email from closiuslegal@gmail.com and added Yoder, telling Yoder he had reached Closius and demanding that Yoder explain. Yoder responded to that email and asked “Why are you speaking on the phone?!? What the actual F is going on here.”

It goes on from there, with O’Grady reaching to Chang and WI Harper and Chang e-mailing back “I can hereby confirm that this term sheet is indeed fraudulent and that the signature has been forged in my name on behalf of WI Harper Group… We appear to have both been victimized by this intentional act of defraudment,” but then sending O’Grady a cease-and-desist to stop spreading the fake term sheet after he spoke to Yoder. As for Yoder, he didn’t explain the fake Closius e-mail, but blames the fake term sheet on O’Grady:

As for the term sheet, Yoder says O’Grady downloaded, without permission, a “draft” of a term sheet from a Chat Sports Dropbox folder and edited it, and that it was this version, fraudulently edited by O’Grady, that got sent around. On a call with Yahoo Finance, Yoder initially said he believed O’Grady sent around the term sheet himself from Yoder’s email address.

But on a follow-up call, Yoder revised his answer. He now says that he, Yoder, did send the email, but didn’t know the document he attached, a draft of a term sheet, had been fraudulently edited by O’Grady. Yoder says that he had received an email from a Chinese email address claiming to be a representative for a different firm Chat Sports was talking with (Yoder declined to name it), and claiming that this other firm wanted to make its investment through WI Harper. Yoder believes this Chinese contact was actually O’Grady assuming a fake identity.

Roberts’ piece continues through Yoder trying to demonstrate how to send a fake e-mail, through the two sending demand letters to each other (O’Grady demands $180,000, Yoder demands $10 million), through Yoder admitting to Chat Sports making up fake writers and bylines in their early days and calling it “growth hacking”,  and through Time Inc. sources telling Roberts the catalyst for their dumping of The Cauldron came from Yoder sending around an e-mail to Time Inc. people that The Cauldron was about to run a hit piece on Chat Sports (also a Time Inc. digital partner since September 2015, and currently still one). It’s a fascinating read, and one that shows how this relationship went downhill.

As for Chat Sports’ side of this, the aforementioned Yoder piece from Feb. 16 has some very interesting stuff in it, starting with the subhead “We failed at acquiring another company, now its founder is making it his life’s mission to harm us. Here is the story.” It goes on from there, and includes him accusing Company X founder “Jay” of impersonating Chinese investors, plus assorted felonies:

But, what Jay didn’t know was who was investing. But, he did have access on Dropbox to our blank term sheet, and here’s what he did with it:
1. Took contact info from VC firms and family offices on our “possible leads” funnel.
2. He contacted the firms under the disguise of “he was with Chat Sports”.
3. Created a Chinese email address (@sina.cn domain) under the female name “Liu Zhong” (刘 钟 in Chinese) and began contacting our lawyer,and firms we felt good about, acting as if ‘she’ was the representative from an international family office we were speaking with in China — all in an effort to gain information, confuse and deceive our team and potential investor. I only know this one because Jay wasn’t clever enough to hide his IP Address with a VPN, and this “Chinese investor” was actually emailing from Florida and North Carolina (gotta love email open tracking services). I was even duped by this one without realizing it for a long while.
4. When contacting people as himself, he often repeated this line to them all: “James Yoder is claiming you’re leading a Series A”, hoping to get a yes or no out of these investors so he could disparage Chat Sports.
5. Finally, 1 firm took this seriously and demanded more info. So, Jay took our term sheet, filled out the firms name on it, and sent it to them in an attempt to cause a ruckus in our timeline to close our investment.

Oh, and then there’s this part on Closius:

7. Googled, then called, a family friend lawyer that worked on the LOI for us (the only lawyer representing us that he knew, who didn’t represent us in financing transactions) and peppered him with questions about our Series A. This lawyer, not very well versed on the inner workings of the deal tells Jay that he’s not the guy to talk to about this. Jay made up his mind FAKE LAWYER, FAKE SERIES A! (say that in Donald Trump’s voice).

This isn’t the first controversy for Chat Sports. They took a lot of fire back in December 2015 for a story about Ohio State head coach Urban Meyer being offered the “largest contract in NFL history” to coach the Cleveland Browns, something that was picked up by major media outlets, including ESPN’s Pardon The Interruption. That story came from “Mack Ferguson,” who had one tweet and 10 followers, so he seems like a good candidate to be one of those fake writers Yoder talked about. They’ve also been criticized for plagiarism and fabrication.  Roberts’ piece says they have $3 million in funding from private investors, but that the investors he spoke to were all personal friends of Yoder’s who don’t invest full-time. It will be interesting to see what’s next for them.