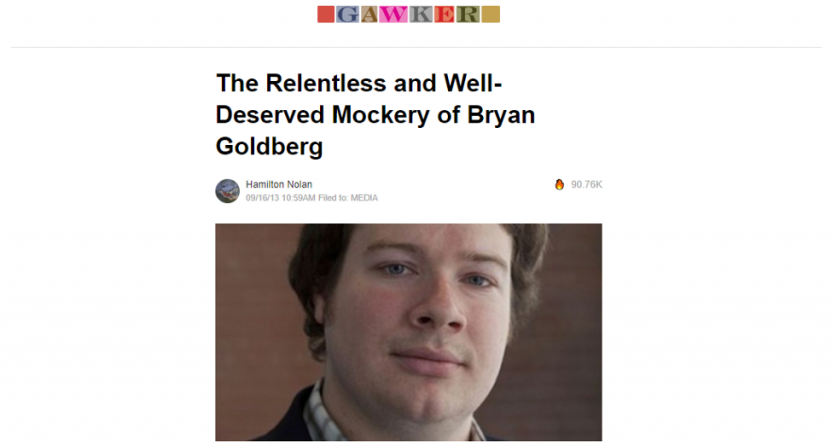 This week has seen Univision entertaining offers for the former Gawker Media (now Gizmodo Media) sites they bought in August 2016, but an actual sale has now happened of a Gawker asset that was never sold to Univision. That would be the Gawker.com domain itself, plus its archives and social media accounts. And that sale is to a figure Gawker regularly used to target, Bleacher Report co-founder and current Bustle founder and owner Bryan Goldberg.

This is the end of a long process, as the bankruptcy proceedings for Gawker.com have played out over the last two years. Billionaire Peter Thiel (a regular target of the site, who funded the Hulk Hogan lawsuit that forced Gawker’s bankruptcy in the first place) was an early reported bidder, but struck a deal with the bankruptcy estate in April not to buy the site or fund litigation against the archives in return for the estate dropping its investigation of Thiel’s role in the Hogan lawsuit. But there were still other bidders; Jonathan Randles and Lukas Alpert of The Wall Street Journal write that Goldberg’s bid beat a $1.13 million bid from marketing firm Didit, and Randles added on Twitter that Online Logo Maker LLC was a third bidder.

As per Reuters’ Jessica DiNapoli, the sale price was $1.35 million, and BuzzFeed’s Ryan Mac reports that Hogan will get about 45 percent of that. That’s not particularly large considering that Univision paid $135 million for most of Gawker Media in 2016, but those were still-publishing sites with associated staff contracts. The Gawker sale is of a site that hasn’t published since August 2016, and it’s about the domain, the social media, and the archives. And given what Gawker (and associated separate site/later subdomain Valleywag) had written about Goldberg over the years, those archives may be an important part of this:

There are already some contingency plans available for those who want to make sure they can still read Gawker’s pieces on Goldberg, though:

Sign up for the Damn Joan newsletter and we’ll send you a convenient PDF of all of the https://t.co/z6RC4Zcxte classics about its cool new owner Bryan Goldberg.https://t.co/yux79BGV2l pic.twitter.com/hACATySfjV

For his part, Goldberg sent an email to Bustle staffers suggesting he does have plans for “the future of Gawker,” although they don’t appear to be immediate. CNN’s Oliver Darcy obtained and tweeted that email:

Bustle founder Bryan Goldberg just sent this note out about his purchase of https://t.co/oOH9NKQKvs. Am told by person familiar he bought it for less than $1.5 million. pic.twitter.com/bvZSONCFCV

At any rate, Goldberg buying Gawker has led to plenty of mockery, especially from those who were associated with the site. Former sister site Deadspin ran a piece on this from Samer Kalaf, titled “Bleacher Report Founder Wins Right To Put His Sweaty Hands All Over The Gawker Archives.” Some highlights:

The archives of our former sister site Gawker now belong to this goon. Bryan Goldberg, the founder of Bleacher Report, a sports site for idiots, and Bustle, the women’s site that assumes women are stupid, won the rights to the defunct Gawker.com in a bankruptcy auction today, as reported by the Wall Street Journal.

It’s not clear why Goldberg, who received a lot of media coverage after he chose to found a women’s interest site for the most cynical, self-centered reasons, would want to own Gawker and the ability to delete anything written on it. Perhaps it was this post which admired how precisely brutal that New Yorker profile was about him—“With his puffy face and untrimmed hair, he resembles a giant six-year-old,”—or this article, with the headline “Who Gave This Asshole $6.5 Million to Launch a Bro-Tastic Lady Site?” Maybe it was oneoftheseblogs that irked Bryan so much that he decided wanted to spend (a reported) $1.35 million on the site that wrote it. If he doesn’t cremate Gawker’s corpse, but instead tries to revive it, it’s a sure thing that the result will be substantially dumber than the original thing.

You might remember that Goldberg was, I’ll remind you again, a man, who bragged about raising $6.5 million to start a site for women, something he seemed to think had never been done before. “Isn’t it time for a women’s publication that puts world news and politics alongside beauty tips?” Goldberg wrote for Pando in 2013. “What about a site that takes an introspective look at the celebrity world, while also having a lot of fun covering it?” Perhaps the names Jezebel, The Hairpin, The Toast, Bust, Bitch, xoJane, Autostraddle, Refinery29, AfterEllen, etc. etc. *screaming* ETC. didn’t ring a bell.

…Ever since Bustle started in 2013, Goldberg continued to make an ass out of himself. There was the Lizzie Widdicombe New Yorker profile of Bustle, where Goldberg admitted that men don’t read books, and was memorably accompanied by a photo of Goldberg using a young woman employee’s bare legs as a desk, because I can only assume Goldberg takes “women’s media” so seriously that he prefers to use women’s bodies as literal furniture. Women across publishing berated Goldberg for his insensitivity, but was it well deserved?

Yes of course it was, as Splinter’s Hamilton Nolan pointed out in a Gawker post titled “The Relentless and Well-Deserved Mockery of Bryan Goldberg.”

We’ll see what Goldberg does decide to do with his new site. He’s made media acquisitions before, including buying Elite Daily from the Daily Mail in 2017 and buying The Zoe Report this year, and he also unsuccessfully made a bid for Rolling Stone last year. And maybe he’ll be in the mix for other titles; Sports Illustrated is up for sale, as are the Gizmodo Media properties. At any rate, it’s certainly interesting that someone who was once such a target of Gawker has now bought the remains of the site.