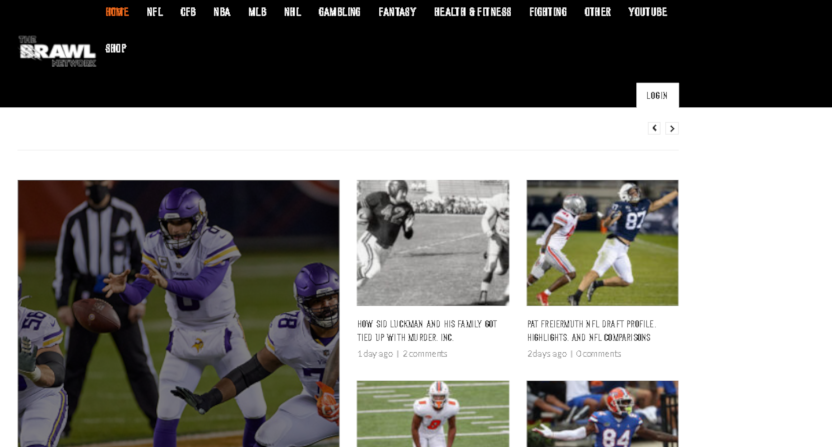 The Brawl Network is a collection of team blogs, podcasts and so on, and one which emphasizes fan perspective. Their About Us page says “The Brawl Network is founded on the principles of bringing your favorite teams news and opinions in an unfiltered, educated and entertaining facet. Many are tired of the main stream media’s bias, filtered, reiterative news. …The Brawl Network has Changed the game by reporting the same news as the main stream media, but with passion, in-depth knowledge of the actual team and in an entertaining way” [sic]. But the network has lost a lot of talent over the past week, and many of those who have left have referenced grievances with founder Mike Brez. One of the first public exits came from Nate Sanchez, who posted a DM thread of Brez axing him (with lines like “I am the alpha and omega of the Brawl!”), and then said that came after Brez complained about a generic tweet he sent criticizing vaccine hot takes:

I loved my time working with @NetworkBrawl and there are some very talented people. But the flat out disrespect and childlike behavior of its founder is laughable. Best of luck to all the people at the network that have an ounce of respect for others!

The explanation I received: pic.twitter.com/nQ2IiDjFPw

Couldn’t agree more with everything you said. Here’s the tweet in question though. Seem fireable to you? https://t.co/C8DtueGoX8

For the record, written social media comments would fall under libel, not slander. But Sanchez’s tweet is clearly not defamatory. It is possible to see how Brez might think that was about him, though, given that Sanchez also liked tweets criticizing Brez’s takes on COVID-19 vaccines:

Anyway, this led to other people criticizing Brez, including one posting a DM thread where Brez didn’t like the price he quoted for an intro and fired him:

And that led to a wave of other people and podcasts disassociating themselves from the network, although many of those didn’t spotlight specific issues:

Personal news: I’ve had an incredible journey with The Brawl Network and Chargers Brawl, and am grateful to have met so many amazing people throughout. I’ve decided it’s now time to write a new chapter in my story. I’m excited for the future, and to share it with you VERY soon!

Brandon, Ryno, and the podcast are no longer affiliated with the Brawl Network. We greatly appreciate the network and wish all of the Brawlers out there the best of luck.

We will still be bringing you a podcast each and every week covering the Green Bay Packers.

If anyone has any writing, editing, producing, hosting or similar gigs available (longterm or freelance) pass them my way.

An update on Colts Brawl: pic.twitter.com/WA2SsoVdYW

I tweeting under another account, because people make up complete, horrible lies or support them then block. Feel free to hit me up at @mikebrez5
Sure he is my conversation with @StephenBurton86 pic.twitter.com/XGGr4pFnom

This one? The complete conversation with michael and i about his transition in full and the last communication we had pic.twitter.com/GRNBLsoNq1

What is obviously there is a redirect takes about 4 weeks to complete in which i said i would do for you guys. In addition i asked for my Twitter handle back that you guys changed the password of it unauthorized.
Not too difficult

You wanted to “wage war” with us over us wanting to go in a different direction because of your actions. We told you from the beginning we didn’t want anything like this to happen and yet you still went out of your way to go after us. You don’t have a shred of credibility anymore

Very simple. I own all brawl handles. I lent them access to post. They changed the password and stole the account. I asked for it back when they quit and they wouldn’t return it pic.twitter.com/fgiC7vH6dR

Who owns a Twitter account dedicated to one outlet’s coverage of a team is a legitimate point of contention, and one that usually depends on whatever contributor agreements or employee agreements are signed between the parties. And we’ve seen that lead to some acrimony and even litigation before, as in the case of The Roanoake Times and Virginia Tech writer Andy Bitter (that led to both sides eventually dropping their claims). So there may be some merit to Brez’s point here, especially if it was clear in agreements that the accounts belonged to him or Brawl rather than individuals. But this is still quite an unusually high-profile way to have that dispute play out.

After that dispute, some further heat entered the situation with Colts’ writer Michael Terrazas tweeting that Brez called him and said “I will own your Mexican ass.” Brez has disputed that, calling it “a complete lie,” and accused Terrazas of slander (again, it would be libel), and endeavored to prove his point with screenshots of four different phone accounts that don’t have an outgoing call to the number he cited for Terrazas. Terrazas responded with a screenshot of a call log showing an 11-minute call from someone in his phone as “Mike Brez,” but without an associated number.

Following that dispute, a lot of people went digging through Brez’s old tweets. And that led to a lot of posted screenshots of past remarks using racist homophobic, antiSemitic and antitrans language from Brez’s Twitter account:

This isn’t adversity….your racism and bigotry is finally getting exposed. pic.twitter.com/JObPAeEGJj

not ONLY a #RacistMikeBrez but he's a homophobe too… ? #BrawlNetwork should NO LONGER be a thing. pic.twitter.com/ksHlavX95Y

You left this one out 😱 pic.twitter.com/E9LCrkamyT

I see a lot of my followers also follow this clown. Today being International Transgender Day of Visibility it would probably be a good time to unfollow him. https://t.co/r7NrcYFpkE

In replies to people criticizing some of those tweets, Brez said he inserted the n-word to…criticize Ted Cruz:

Actively? Those are the racist words said by man who i came against. 4 years ago. My fault for standing against the racism

Well not as clear 4 years ago, cruz didnt say “n-word” so I conveyed the way he did. The point was for the word to stick out to the person i was talking to.

He also tried to defend some of those other tweets with “I have no racist tweets” and “take a look at the threads.”

After the discussion about Brez’s tweets, we found a dozen tweets of people publicly announcing their departure, with that list continuing to grow.. Here are a few of those departure tweets:

I wanted to wait until Friday when I originally scheduled my resignation. But effective immediately, I am no longer working for the Brawl Network.

I appreciate everything that the Brawl Network allowed my team and I to accomplish.

After seeing the most recent tweets exposed, i've decided to discontinue my work with the Network.

We have a great team, & we will be pumping out OUR own Content and Podcasts in the near future!

But the ex-Lions Brawl team of @EverydayFFB @TheFifthTop and I will be staying together and will be dropping a new name soon ? ? pic.twitter.com/M09SsUnMB6

It is clear that a lot of people have left Brawl in the last week-plus, and that many of them have cited Brez’s behavior and his past tweets as a reason why. We asked Brez for comment on the departures, but have yet to hear back. The company’s Twitter account has yet to put out any statement on the departures as well. It remains to be seen if there will be  any long-term implications for the network from the exodus of contributions.