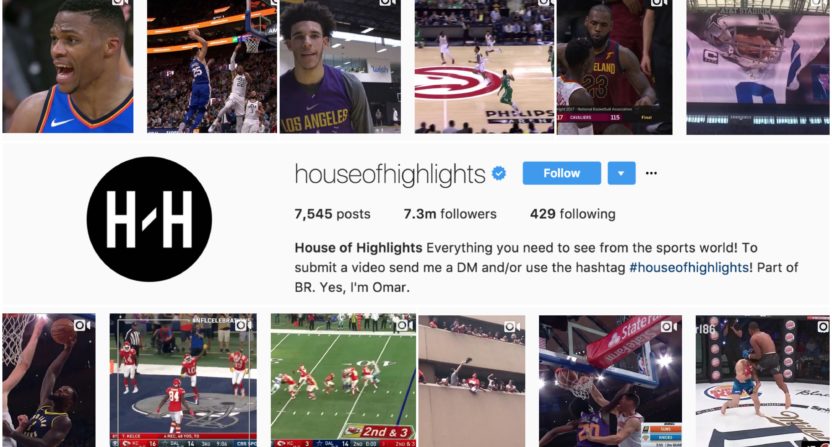 Each morning, 23-year-old Omar Raja wakes up at 9 or 9:30 a.m., checks the day’s sports news, opens up Instagram and begins wading through 600 or 700 direct messages. Many of those messages come addressed to him by name, and some of them, on occasion, are sent from the same professional athletes he watches on TV. He spends several hours on this daily project, mining material and measuring the pulse of the people, then gets to work curating House of Highlights, one of the most popular accounts on all of Instagram.

House of Highlights is SportsCenter for the social-media generation. It boasts 7.3 million Instagram followers, or slightly more than CNN and Buzzfeed combined. Almost all of the videos it posts — highlights, witty photoshops, amusing viral clips — garner more than a million views, and most surpass a thousand comments. In the month of October, House of Highlights earned 537 million video views (fourth most of any Instagram account) and 89 million interactions (ninth most on the platform). In those 31 days, it added 258,000 new followers, about twice the overall count of The Ringer and SB Nation combined.

NBA players comment on House of Highlights posts and online sensations spring from them; Raja claims the Running Man Challenge and the Drive-by Dunk Challenge among the trends his account has helped spark.

Kyrie and Marcus Smart put on a show. ??

House of Highlights is owned by Bleacher Report, which bought the brand in the summer of 2015 seeking to attract the Generation Z audience that lives on Instagram and loves Raja’s emoji-filled voice. But although B/R is one of the most successful sports media properties on the internet and House of Highlights is a three-year-old Instagram page run by a kid barely old enough to buy beer, executives at B/R don’t see Raja’s account as a side project. They envision it growing into a worthy rival to Bleacher Report itself.

This is the story of how Bleacher Report and Omar Raja came together to build the next dominant digital sports property.

House of Highlights began in July 2014, when Raja, then a sophomore at Central Florida, watched LeBron James leave the Miami Heat, Raja’s favorite team, to return to the Cleveland Cavaliers. To salve his pain, Raja flipped through YouTube, devouring clips of LeBron palling around with Dwyane Wade. From that reminiscing, an idea was born.

“I kind of said to myself, these are videos I share with my friends,” Raja recalls. “Why has no one put them together in one spot?”

Raja scoured the internet but failed to find a site or social-media account aggregating the sort of clips that he was interested in. So he decided to do it himself.

House of Highlights’ rate of growth was almost unbelievable. Fans on Instagram responded en masse to Raja’s voice and his account’s database of clips. By March 2015, only nine months after House of Highlights started up, it had more than half a million followers.

That’s when it caught the eye of Doug Bernstein, then Bleacher Report’s vice president of social media. After only a week or two of following House of Highlights, Bernstein concluded that Raja had both a unique idea and a unique talent. At a time when Instagram was still largely photo-driven, Raja was working in video. And at a time when most outlets’ social media accounts were serious and matter-of-fact, Raja was tossing emojis and slang into nearly every post. Bernstein saw middle- and high-school kids inhaling House of Highlights’ clips the way he had embraced SportsCenter when he was young.

“We were always trying to be the come-up to ESPN, and I was always worried, who was the come-up to Bleacher Report?” Bernstein recalls. “And for me, that was House of Highlights.”

Bernstein knew almost immediately that he wanted to bring House of Highlights under Bleacher Report ownership. The next step was selling the concept to higher-ups at the company. In many ways, the move was counter-intuitive. Since social media had come along, media outlets had used the platforms to drive traffic to their sites. But with referrals from social failing to grow, Bernstein recognized the need to try something new. That spring, he put together a pitch deck on the importance of native social content — photos, videos and graphics meant to simply increase an outlet’s online following and brand recognition. On the last slide of his presentation, Bernstein recommended Bleacher Report buy House of Highlights.

Bernstein’s proposal was not embraced right away. Finocchio says Bleacher Report had made a conscious decision not to enter what he called the “portfolio of brands business” and that many people within the company were hesitant to make an exception for House of Highlights. Besides, committing fully to native social would constitute a drastic shift in strategy, both in term of content and business model. But Bernstein made a compelling case for native social and for Omar, and in the end, House of Highlights’ magnitude and potential won out.

“We look at a lot of different stuff in the space,” Finocchio says, “and [House of Highlights] was the single most compelling company, brand, whatever you want to call it, that I’d ever looked at.

Bernstein emailed Raja on July 1, 2015, and within 15 minutes the two were on the phone. The call arrived at the perfect time for Raja, who was beginning to wonder how to leverage House of Highlights into a fulltime job once he was done with school. To hear Raja and Bernstein tell it, the acquisition was easy, with Bernstein promising Raja he could keep doing what he had been all along and Raja vowing to continue working as doggedly as ever.

Eight days after Bernstein and Raja first got in touch, Bleacher Report and House of Highlights partnered on their first mini-project: a 15-second clip of Clippers center DeAndre Jordan’s face photoshopped on Leonardo DiCaprio’s character from The Wolf of Wall Street. Raja thought to himself, “This is going to work perfectly.”

Before long, Raja made an impression at Bleacher Report with his work ethic and his magic touch with the Instagram audience.

“Oftentimes Omar can post the same highlight that another media company might post, and his engagement levels will be 10, 15 times higher than theirs,” Finocchio says. “Because he is able to frame the content, the highlight in a way that is culturally relevant. It’s an art form.”

In the two-plus years since joining B/R, Raja has become an internet celebrity. Pro athletes know him by name and sometimes drop DMs to alert him to their highlights. Last summer, he was invited to a pickup game in New York City featuring Carmelo Anthony, Russell Westbrook, James Harden, Chris Paul, and others. The NBA superstars asked him to keep score. In less than the time it took the Sixers to build a competent team, Raja had risen from average college kid to an online tastemaker, dapping up his heroes.

When she’s out of your league but answers your DM anyways. ? (via @nba)

House of Highlights and Bleacher Report remain distinct brands, though Raja’s clips often make their way to B/R’s main Instagram account. House of Highlights has begun to produce sponsored videos, but Finocchio says the focus for now remains on growing the brand, not generating revenue.

Whenever and however Bleacher Report decides to fully monetize House of Highlights, they will likely have advertisers lining up. Not only does Raja’s account have a massive following, it has developed incredible cultural cache, especially with the social-media-obsessed Generation Z. The way Bernstein sees it, baby boomers got their sports news from newspapers and magazines, Generation X turned to ESPN, millennial looked to websites like Bleacher Report, and today’s youth favors Instagram.

“We see YouTube and Instagram as kind of that next big disruption in the platform consumption space,” Bernstein says. “That’s the audience we’re going after. We’re going after the 12-24 year-olds.”

Scrolling through House of Highlights posts, it’s not immediately evident what makes Raja’s voice so remarkable. He uses lots of flame emojis, but so does everyone else under 25. And the jokes he cracks are funny, but not so different from ones you’ll find in dorm rooms across the country and on Twitter memes across the internet. But in a way, that’s the point. While some publications run their social media accounts with a youthful affect, House of Highlights authentically speaks their language. Raja doesn’t need to wonder how an Instagram-crazed young person would process the latest highlight dunk because he is an Instagram-crazed young person — and a sharp and talented one at that.

Of course, the rest of the sports media industry won’t simply sit back and let Bleacher Report conquer the Generation Z audience. Look around social media now, and it’s easy to see traces of Raja’s style in all sorts of publications’ accounts. But while social media directors everywhere would surely love their own Omar Raja, Bleacher Report has the original, and he has a 7.3-million-follower head start.