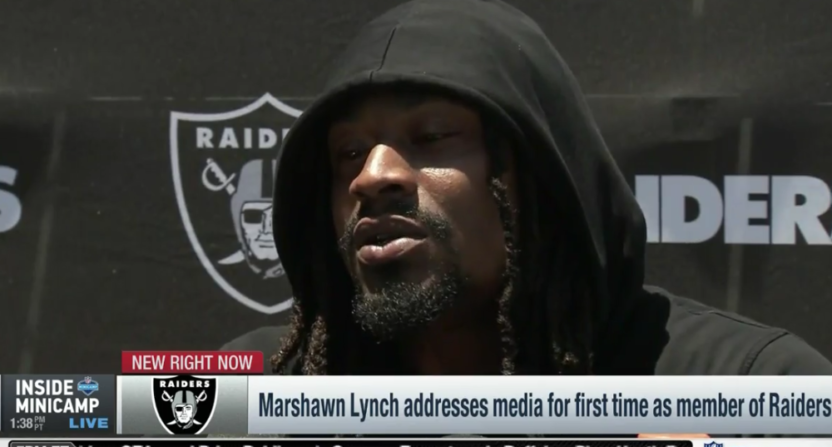 Like other areas of entertainment, sports programming regularly follows patterns. If something draws an audience, it’s repeated, and plenty of spinoffs or similar shows along the same lines are attempted. So that perhaps makes it particularly interesting that Bleacher Report president Rory Brown, in a discussion with Digiday’s Sahil Patel about their upcoming No Script show with Marshawn Lynch for Facebook’s Watch platform, said that they’re not looking to repeat what they’re doing with Lynch with anyone else:

It’s easy to envision a scenario where Bleacher Report works with all sorts of athletes on shows like “No Script” or even future episodes of “No Script” that center on different athletes. But that’s not how Bleacher Report plans to approach live-action and athlete-driven original programming, Brown said.

“One thing we’re not doing is trying to do shows with 50 different athletes,” Brown said. “It’s more valuable to have premium content versus throwing spaghetti at the wall to see what sticks, which is what a lot of other publishers are doing. We’re definitely doing something with a handful of athletes, but we’re not going to run the Marshawn Lynch playbook with someone else.”

Of course, that may be a semantic divide; a show with a different athlete may seem more similar from the outside than it does from Brown’s perspective. But there’s perhaps some merit to this idea of trying rather different things over following the same model for every athlete you’re working with, and that’s perhaps especially true when it comes to an athlete as unique as Lynch. Brown discusses elsewhere in the article that B/R pieces on Lynch have proven to be some of their most popular, which led to their interest in doing a show with him, and Lynch has certainly had plenty of memorable moments over the years, from him driving the injury cart at Cal (a moment so famous it later got a bobblehead) to “I’m just here so I won’t get fined” to asking married reporters out on live television to saving his favorite soul food restaurant to dropping all the profanity in press conferences. So he’s not exactly following any mold, and a show with him seems likely to be pretty different.

Something else that’s interesting in that article is that Brown doesn’t seem fully sold on doing more things for Facebook. This show, which will air 10-minute or so episodes weekly this fall on Facebook’s Watch tab, has Bleacher Report retaining the content rights, so they can post it to other platforms after a period of exclusivity. And it’s funded by Facebook, which seems significant when you hear Brown talk about the consistent cast and crew (up to 20 people) who regularly worked on this and call it their first live-action video show. But his comments about Facebook Watch seem to be much more along the lines of “We’ll try this out” than “We’re really big on this”:

Currently, this is the only show that Bleacher Report is producing for Facebook’s Watch, a new section on Facebook dedicated to professionally produced video shows. Facebook is willing to spend as much as $1 billion on original content through 2018, according to The Wall Street Journal, as the platform gets more serious about taking on YouTube. In the coming months, Facebook expects to offer hundreds of short- and long-form shows on Watch.

…“Watch is not a proven product yet, but out of fairness to Facebook, we’re optimistic about it due to the level of investment they’re putting into this initiative,” said Brown.. “It does not hurt when there is a licensing fee attached to this as well, but Facebook has made this less of a blind guess and more something where we’re able to weigh the short-term, mid-term and long-term potential of the show.”

So, could No Script wind up being the first of many Facebook shows for Bleacher Report, or the first of many athlete shows? Absolutely. But at the moment, it seems more like an experiment, and an experiment that’s going to be pretty different than anything that comes after. And even if they find success with it, it doesn’t sound like they’ll look to replicate it exactly. That’s a different approach than we often see in the sports media world, but it’s one that could make sense, especially if they keep working with unique athletes like Lynch. It would seem to be more logical to tailor that programming to the athlete’s strengths and vision, and it sounds like that’s what B/R is trying to do. We’ll see how this pans out for them.