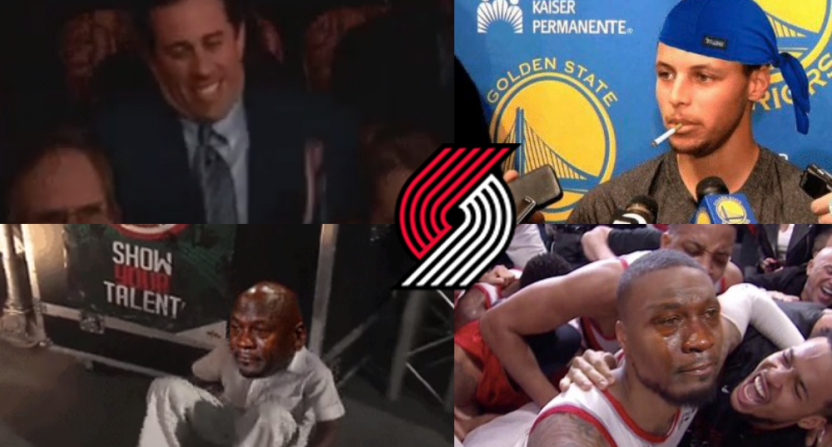 For the second game in a row, the Portland Trail Blazers blew a double-digit lead in the second half to lose to the Golden State Warriors in the Western Conference Finals. While Game 2 was a much closer affair, the Warriors didn’t stop until the final whistle as they beat the Blazers in Game 3 by 11 in Portland.

The reaction to Portland’s failure to beat Golden State, even after having big leads in two of their three games, depends on who you ask. Some see this as Portland choking twice during times they could’ve defeated the back-to-back champs. Others see Portland punching above their weight this season and despite being totally exhausted with a lot of injuries, keep battling as underdogs against the back-to-back champs who are likely going to repeat.

Local news outlet The Oregonian reacted to the Game 3 loss by highlighting some notable memes and photoshops posted by members of the media and fans on Twitter.

This did not sit well with Vulcan Sports and Entertainment [Trail Blazers ownership group] and team CEO Chris McGowan, who drew a rather noticeable line in the sand regarding the article.

As long as I am in charge, I will make sure we don’t spend another dime with them. This is ridiculous. https://t.co/xEBnSAMwUj

Replies to McGowan’s tweet mostly consisted of Blazers fans who were in agreement with him but this very much seems like an overreaction.

Sure, Blazers fans aren’t going to appreciate an article making light on another crushing playoff loss and we all root for teams who have failed at one point or another and were open to ridicule from the media that we’ve felt may have been going too far. But to have someone in McGowan’s position make a public response like that to the local news outlet is disconcerting.

Apart from the point that McGowan’s tweet gave The Oregonian much more publicity for an article he didn’t care for, his assertion that the Blazers “won’t spend another dime with them” is problematic in and of itself.

What exactly does that mean? If McGowan’s serious, is the team really going to decide to pull advertising because the paper rounded up some online memes? Or, going even further, could that mean the team will no longer credential Oregonian writers to cover the team? Is this a threat to possibly do the same to any other news outlet who dares to write anything remotely negative in the future? Or worse, anything the team perceives as negative?

The team is well within their right to do that, but if that’s the route they want to go down, it typically doesn’t work well for the team in question. And while Portland fans may rejoice that their team is taking a hard stance on a news outlet who they feel wronged them, they may miss it when there’s no impartial outlet to cover the team and it’s just PR people telling them only the positive things.

One can make an argument that copying and pasting a bunch of memes and snarky tweets from fans and members of the media is low hanging fruit to get views (I’m guilty as charged sometimes). But considering The Oregonian’s more traditional recap of Game 3 only has three shares while the meme post has 371 shares as of Monday night, maybe that’s what most people actually want even though there’s a very passionate contingent on social media who are very much against that.

I don’t blame Chris McGowan for being angry at The Oregonian for making it look like they were reveling in the local team’s misery for clicks. In fact, there’s a part of me that appreciates McGowan for not acting like other team executives who might not care whether or not their team wins or loses.

The issue is that The Oregonian isn’t supposed to be fans of the local sports team. And publicly reacting like that for something that honestly wasn’t that bad makes it look like Blazers ownership only ever wants positive PR things to be written about them regardless of the situation. And that’s just not going to happen.