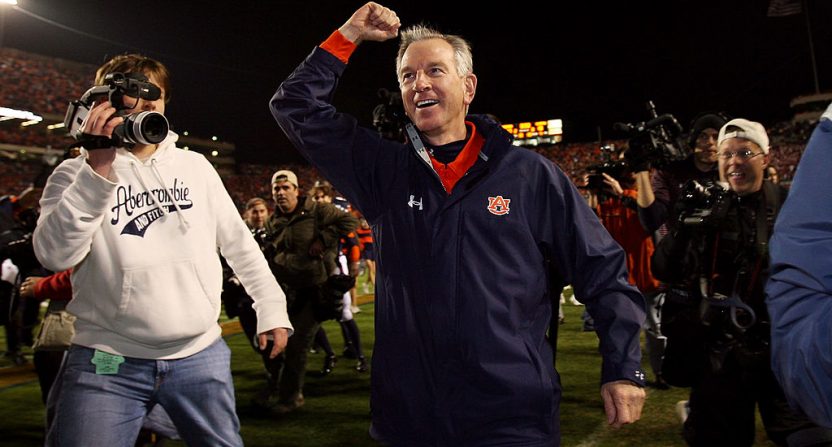 In the tradition of LeBron James’ The Decision (with ESPN) and Kevin Durant’s “My Next Chapter” (with The Players’ Tribune), Tommy Tuberville (or ” a person familiar with the situation”) appears to have found a way to direct news about himself to an outlet he’s involved with. That would be 247 Sports site Auburn Undercover, where Tuberville is a columnist, something they conveniently mention in an editor’s note at the bottom of their BREAKING news piece “Tommy Tuberville makes decision on whether to run for governor.” The headline, subhead and tweet all leave it ambiguous what that decision is to get you to click through, but we’ll spoil it for you; he’s not running. From the piece:

Former Auburn coach Tommy Tuberville will not run for governor in Alabama after two months of exploring the possibility in 2018, a person familiar with the situation tells AuburnUndercover.

Tuberville was serious about the potential run for governor in 2018 and is expected to make an announcement on his decision to not pursue the election later this week.

Tuberville filed two reporters with the Alabama Secretary of State’s office previously to make his potential run public. He also filed a financial disclosure form to loan $100,000 to himself to start a potential campaign.

The former Auburn football coach move back to Alabama after his tenure as the head coach of Cincinnati ended in December. He spent the last two months on a listening tour of the state.

“A person familiar with the situation”? Hmm, I wonder if that’s their columnist Tommy Tuberville. He’d seem to have an inside line on what decisions Tommy Tuberville might make. And it’s notable that they quote from a column Tuberville wrote for the site directly after this paragraph. Really living up to the Auburn Undercover name there. (However, this is even funnier if it somehow isn’t Tuberville and they couldn’t get this directly from the source, though.) Oh, and site editor Brandon Marcello (who wrote the story) not only rolled out the all-caps BREAKING, but followed it up with a tweet about Auburn Undercover subscriptions and a subtweet about those not crediting Auburn Undercover properly:

BREAKING: Tommy Tuberville makes decision on whether to run for governor https://t.co/RrzXa997r4 pic.twitter.com/t6HFOUaiPz

Subscribe to the leader in Auburn sports coverage with a great deal: 4 MONTHS for the price of 1 https://t.co/F6Q75fBbiP pic.twitter.com/ADRGu1616L

Thanks to those crediting @247Sports for breaking Tommy Tuberville news. The others … Well, you know who you are and what you are.

For all the fun we’re having with this, the base principle here isn’t necessarily wrong. News like this has value, and there’s a growing trend of newsmakers wanting to both control where and how that news appears and potentially monetize it as well. (James’ The Decision funds went to charity, but it did make money; we don’t know if there was a direct financial incentive for Durant to announce his decision at The Players’ Tribune, but it certainly brought that outlet massive traffic.) Tuberville deciding not to actually run is newsworthy (although less so then if he’d decided to run), and it makes more sense for him to announce that decision through the site he writes for than through a newspaper or other outlet he’s not involved with.

The execution of this is hilarious, though. From the use of “a person familiar with the situation” to the tweet, headline and subhead all forcing a clickthrough to learn the news, to the quotation from Tuberville’s column (which seems to have more to do with politics than football) to the editor’s note at the very end that “Tuberville is a columnist for AuburnUndercover.com,” there’s a lot to laugh at here. If Tuberville wanted to announce his decision at the site he writes for, why didn’t he just do it in his next column? (And if this somehow isn’t directly from him and isn’t how he wanted the news to come out, that relationship just got awkward.) The jumping through hoops this site’s doing for a “BREAKING” story involving someone who writes for them is pretty funny.