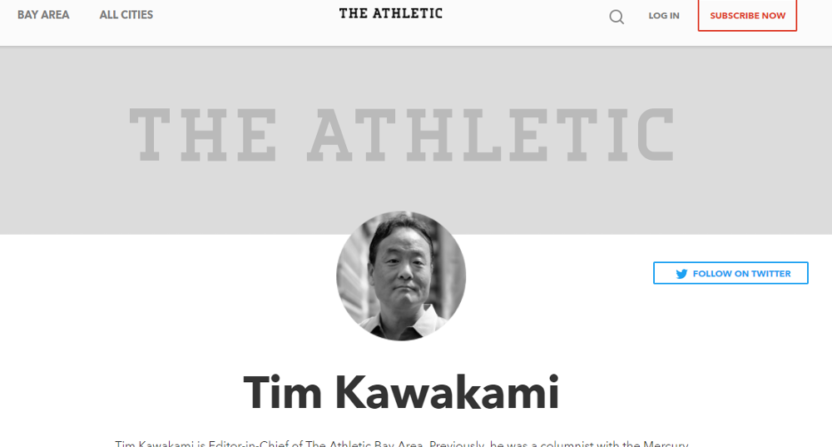 Anything that requires a subscription, from newspapers to magazines to the new collections of subscription digital local sports journalism sites, often provides some extra incentives for signing up. Tim Kawakami, the former San Jose Mercury News columnist and the new editor-in-chief of the just-launched The Athletic San Francisco Bay Area, is offering one of the most unusual yet, though. Kawakami has become famed for blocking people from his personal Twitter account, and he wrote in a mailbag posted Tuesday that he’ll unblock those who send him proof they’ve signed up for The Athletic. First, he explained why he blocks people:

We heard from so many of the Great Bloc of Blocked — FYI, the very handy Blocked By Me website lists 8,873 Twitter handles that I’ve blocked since 2009 (seems like it should be much more!) — that the co-founders of this company, I think, were at first stunned and then intrigued by the whole dynamic.

I cannot really explain this. I can tell you that I did not start blocking people on Twitter as any kind of strategy. I just saw annoying/angry/rude/repetitive people responding to me on my timeline and I loved that I could erase them from my particular digital space with a single button.

I still enjoy this dynamic; I absolutely will continue to block people who annoy me or think they can intimidate me. I do not block people just for disagreeing with me, by the way. I never have. I block people for being rude about it or highly repetitive or for ordering me to think or do something a certain way.

That’s how I do it, and though others have advised me that this is poor digital audience maintenance, it’s how I will always do it.

I don’t ask anybody to applaud me for this or weep for me or understand. And I truly don’t care if these several thousand people never, ever read me, and I have said this.

Then, he said he’s willing to try a restart, and offered details:

…So this is the Official and Perhaps Only-Ever Twitter Pardon Program:

Kawakami also wrote that subscribers who he hasn’t blocked can send in a blocked friend’s Twitter and discuss why they should be unblocked. He promises to unblock everyone who qualifies, with the caveat of “If we find evidence that you spit out racial epithets or were especially ugly in some unique way, you will not be unblocked,” and he reserves the right to block people again in the future. He discussed this more on the latest episode of the Sports Illustrated Media Podcast with Richard Deitsch earlier this week (starting around 30:30 in, where Deitsch asks if this new role will affect Kawakami’s use of the block button):

“It will not affect whether I decide to block someone. That is the easiest decision in the world. If someone is rude to me, or decides to spew some racial epithets, or just annoys me, I’m blocking them. And I made that decision a long time ago. There’s certain people I don’t need to read me. But when we talk about the site, or talk about subscriptions, we are developing a conversation where we might have an amnesty program tied to subscriptions.

I have blocked people that I shouldn’t have, if you’re looking at my career goals, I have done that before. I will do that in the future. Twitter’s a whole nother animal for me, I think it’s livelier that way, it’s just the way my mind works. But we are discussing, and I have certainly raised it myself, and I’ve run into people who are very normal people and just said a couple of things to me that I didn’t like and I blocked them, and I don’t mind unblocking, but I just have a policy where I don’t really do that. … It’s a discussion, and my interest is I don’t want to change my behavior on Twitter because of this.

…This is the weird result of all this. It certainly was not planned, I didn’t get into the blocking game in order to set this up, I swear that, this was a natural thing. But it got to be too many people. If these people are rational people and many of them are, or most, and we figure out how to do this, I think we’ll have at least one wave of this and we’ll have many people unblocked.”

This is a highly unconventional strategy, but that doesn’t mean it’s a bad one. Kawakami’s certainly allowed to block whoever he wants to and use Twitter however he wants to, but as Deitsch notes, his high block numbers are perhaps limiting his audience. Offering an amnesty with a subscription may seem a bit cynical, but there’s nothing to force Kawakami to unblock anyone in general, so it makes some sense for him to offer this in a way that will help pay his salary (and those of the site’s other writers). And he makes it quite clear that paying for The Athletic doesn’t provide people with permanent amnesty from being blocked by him, and that he’s not going to unblock anyone who used racial epithets. So, the conditions here are fully spelled out.

The question is if being unblocked by Kawakami is really a significant value addition for anyone. Even those blocked can still read his tweets (through signing out, incognito windows or other browsers), so this just makes it more convenient to do so. But, at the same time, he’s not selling it that way, and he’s only doing this because there have been tons of people asking him to do so, so there does seem to be some demand, as New York‘s Jonathan Chait noted:

I never understood how @timkawakamii could monetize a business model based on preventing readers. But he's done it! https://t.co/yCwfZntMc9

Of course, this isn’t being sold as an extra charge or a premium feature or anything. It’s a potential one-time amnesty with a one-year subscription (it might get people to sign up for a year rather than a month, but it’s not at a higher rate). The decision to offer amnesties to friends of subscribers is an interesting one, too, and potentially a smart one; after all, many of Kawakami’s tweets are going to be promoting content on the site, so maybe being unblocked from his feed will convince them to sign up too.

One thing this does perhaps show is that Athletic editors and writers (and others doing this sort of subscription journalism) may need to think more closely about their relationship with their readers than your average newspaper columnist. While Kawakami was at the Mercury News, he was an important part of their sports coverage, but there weren’t necessarily big perils for him from blocking large numbers of people on Twitter; yes, some of them may have been Mercury News subscribers and may have complained to editors, but that clearly didn’t lead to Kawakami being forced to change how he acted.

And Kawakami still isn’t being forced to change; he’s made it quite clear that he’ll keep using Twitter the same way. However, as the EIC of a subscription website, it’s probably a little more important for his tweets to get out to larger numbers of people (and hopefully, potential and current subscribers). But this unblocking amnesty also may provide a way to get people to sign up for his site, so his blocking practices may not have been all bad, even if this was far from the initial goal of them. The Athletic SF is more closely tied to Kawakami than the Mercury-News was, though, and it’s interesting to wonder if knowing that you might get blocked by the site’s editor-in-chief at any point (even with a previous amnesty) is a deterrent on subscriptions.

In any case, this specific amnesty program probably makes some sense. It’s a chance for Kawakami to offer some extra incentive to those who subscribe for a year, and one without any financial cost to him (apart from the time spent compiling these lists and unblocking people) and without any further binding promises. It might also entice a few more people to sign up for The Athletic SF, and to do so for a year rather than for a shorter period.

It will be interesting to watch if Kawakami does in fact keep on blocking people after this, though, and if he winds up blocking some of his subscribers after the amnesty. That might lead to some backlash to paying for a site where you can’t read the editor-in-chief’s tweets. Perhaps he should explore the mute button instead, where he doesn’t have to view tweets at him from people he doesn’t like, but isn’t shutting off their access to his account.