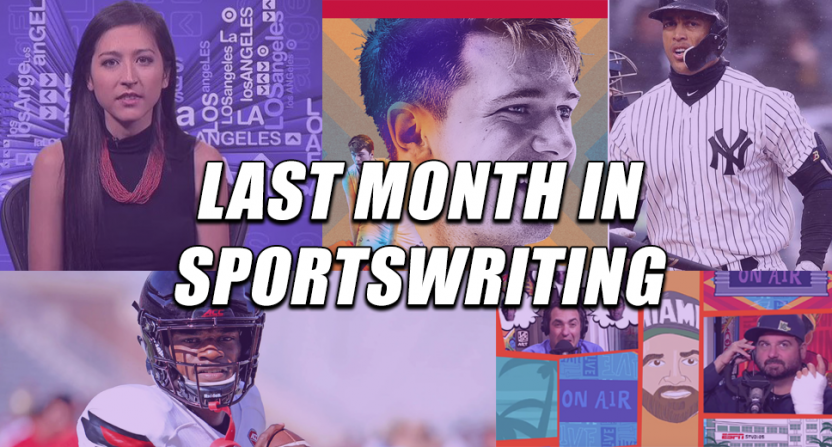 Without further ado, here’s the best in sportswriting from the month of March.

Since joining ESPN in 2014, Mina Kimes has emerged as truly one of the best sportswriters working. Though she specializes in the NFL, Kimes has written brilliantly about numerous subjects, from Korean bat flips to the Bennett brothers to how sports fans should react to domestic abusers.

In April, Kimes submitted two fascinating pieces. The first was a thorough profile of potential NBA No. 1 overall draft pick Luka Doncic, in which she traveled to Slovenia to find out what the 19-year-old does and doesn’t have in common with past European arrivals. The second, in collaboration with Domonique Foxworth for The Undefeated, looked at incoming NFL quarterback Lamar Jackson’s preparedness for the NFL — and the league’s preparedness for him.

Everything Kimes publishes (including on Twitter) is a must-read. Her work in April demonstrated why.

Column of the month:

It’s time for John Engler to go at Michigan State; by Katie Strang, The Athletic

As more and more details have emerged about Michigan State’s weak response to various sexual assault claims, and as the university has continued to mishandle those revelations, it has become clear that, as Katie Strang writes in this unlocked column, interim school president John Engler’s time is up.

‘This is our f–king city’: The oral history; by Joon Lee, Bleacher Report

Five years have passed since David Ortiz’s iconic speech to Bostonians in the wake of the marathon bombings. This piece brings together a great cast of characters — including Ortiz himself — to reminisce on Ortiz’s words: “This is our fucking city.” 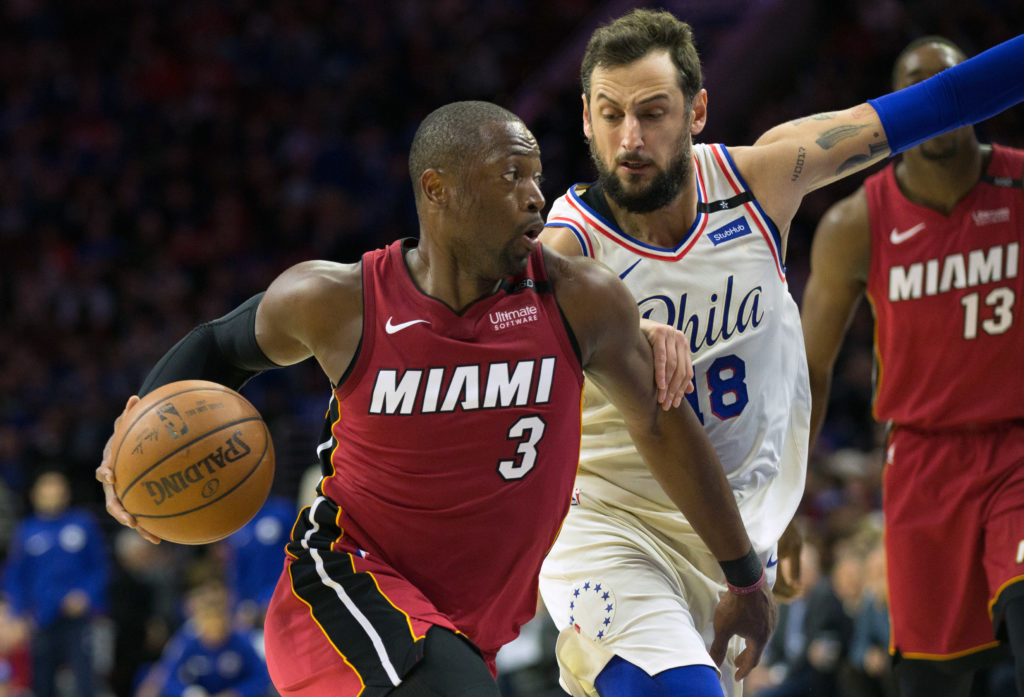 ‘I’m not for everyone. I’m for Miami’; by Seerat Sohi, SB Nation

Dwyane Wade’s stay in the NBA playoffs didn’t last very long, but this piece about his triumphant return to Miami holds up.

‘If you want to be great, you have to work’: Jason Kidd counters his critics; by Howard Beck, Bleacher Report

Months after being fired from the underachieving Milwaukee Bucks, Jason Kidd explained what he regrets about his tenure with the organization and why such a young team might not have been the right fit for him.

Lamar Jackson could change the NFL — if he gets the chance; by Mina Kimes and Domonique Foxworth, The Undefeated

This piece, published before the NFL Draft, comes with a provocative thesis: Maybe Lamar Jackson’s success at the next level might depend as much on the situation around him as it does on him.

Why Jake Locker walked away from football—and why he doesn’t miss it; by Greg Bishop, Sports Illustrated

Three years after abruptly walking away from the NFL, Jake Locker opened up about why he made such an unusual decision. Let’s just say he’s not your typical quarterback.

Gabe Kapler is an analytics fanatic addicted to fitness. Are Phillies fans ready to embrace him? by Tom Verducci, Sports Illustrated

It took only a few days for Phillies fans to turn on new manager Gabe Kapler (before a winning streak quickly soothed tensions). This profile may or may not please every Philadelphian, but it will delight the ones who like exercise, advanced stats, “optimization” and Simon Bolivar.

The state of the black manager in Major League Baseball would disgust Jackie Robinson; by Rhiannon Walker, The Undefeated

The Undefeated teamed with ESPN Stats & Info to deliver a data-packed piece that suggests black managers in baseball don’t get a fair deal. 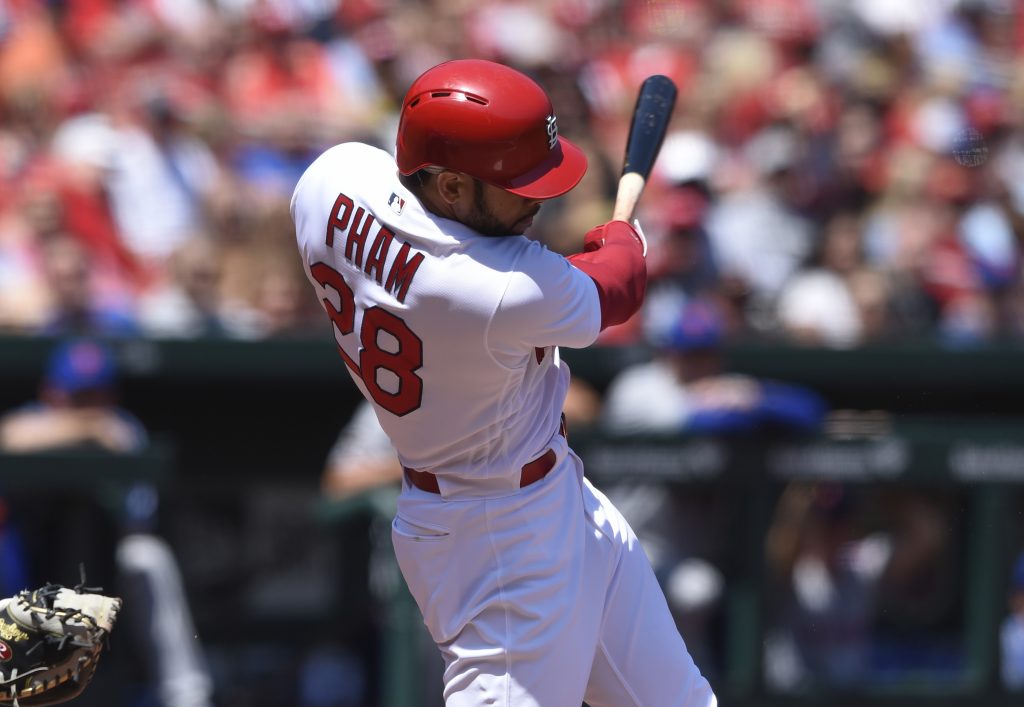 Tommy Pham waited forever to make it. Now, he’s got plenty to say about his journey; by Jack Dickey, Sports Illustrated

This piece got a lot of attention for Pham’s colorful (i.e. profane) quotes, but it also offers a nuanced portrayal of a thoughtful, complicated dude.

Before Damian Lillard and the Trail Blazers flamed out of the playoffs in a first-round sweep, Lee Jenkins delivered a compelling profile of the All-Star guard.

Do you get the show? by Mike Schur, Slate

Television writer Mike Schur writes about the ever-irreverent Dan Le Batard Show, capturing how a show largely intended to spoof sports radio became one of the top programs on the dial.

How Giancarlo Stanton let go of ‘Mike’ and embraced who he is; by Billy Witz, New York Times

A lot has been written about Giancarlo Stanton but nothing quite like this piece on how he got his name and how his choice to ditch “Mike” helps sum up who he is. 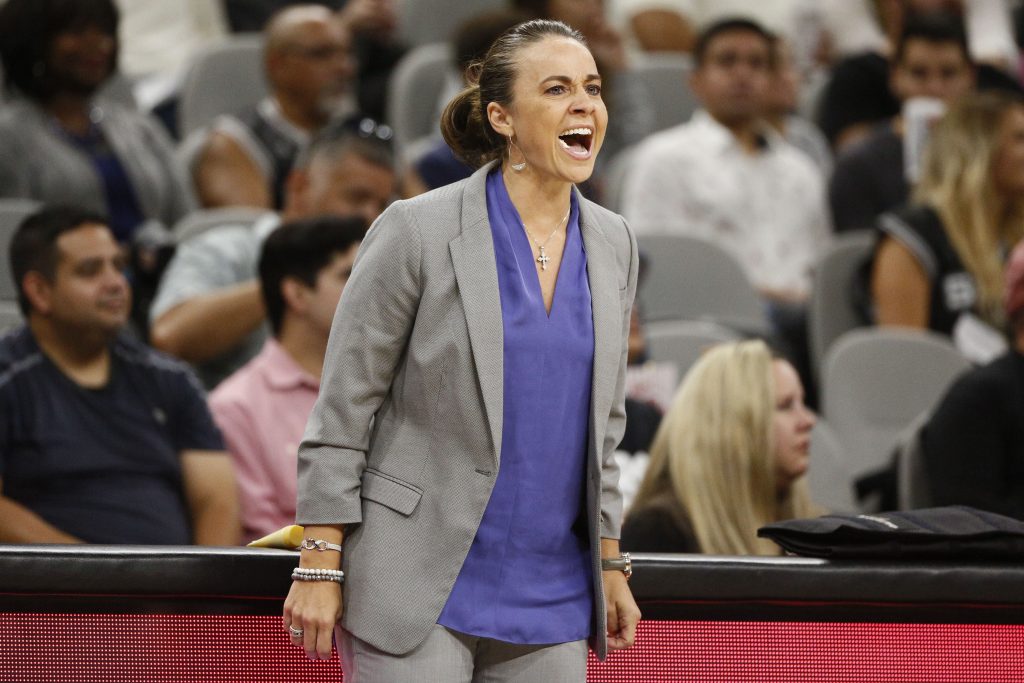 How far can Becky Hammon go in the NBA? by Louisa Thomas, New Yorker

This piece works as both an insightful look at the NBA’s first female assistant coach and an astute examination of the (slow) progress women continue to achieve in the American sports landscape.

Luka Doncic is no Darko Milicic; by Mina Kimes, ESPN

Mina Kimes delivers a truly fascinating profile of the next great European basketball player, who happens to be distinctly different from many of his forebears. By the end, you’ll feel that you know what 19-year-old phenom Luka Doncic is all about.