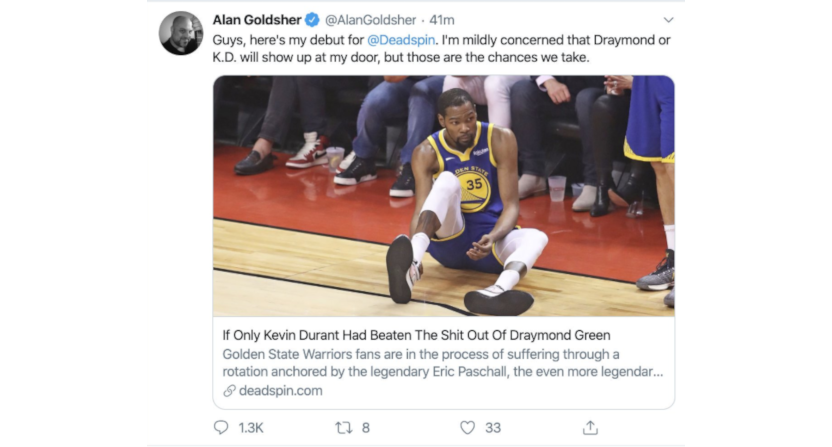 G/O Media’s firing of long-time Deadspin deputy editor Barry Petchesky and reiteration of a “stick to sports” mandate led to the entire Deadspin staff resigning this week, but the company insisted that they were “excited about Deadspin’s future.” Well, the first part of that future didn’t go so well for them. Deadspin’s content Friday included a couple of Associated Press videos rebranded to include Deadspin watermarks (and pre-roll ads, of course), accompanied by single sentences bylined “Deadspin staff,” but then they ran an actual post from author and musician Alan Goldsher. And it wasn’t received well.

Goldsher’s post was titled “If Only Kevin Durant Had Beaten The Shit Out Of Draymond Green,” and it included a lot of musings about the current Warriors, the Durant-Green divide, and more. Goldsher then tweeted that at 2:09 p.m. Eastern as “my debut for Deadspin,” and that post then put up an incredible ratio (appropriate, considering that The Twitter Ratio comes from a Deadspin post by now-former staff editor David Roth) before he deleted it. Goldsher then tweeted at 2:53 p.m. Eastern, 44 minutes later, that the responses had convinced him to no longer work for Deadspin.

the final count. he deleted it, but not before i watched it spin like a slot machine for five minutes. pic.twitter.com/FgE8Qu8NlT

I've listened to the room, and I'm out of Deadspin. I hear what you guys are saying, and I respect it. This clearly wasn't a good idea, and I appreciate that I was pointed in the right direction.

That's my personal experience. That's my reality. Former Deadspin writers should be thrilled that their community has their back. If I'd ever had that kind of support, I probably would've looked at the opportunity much differently.

Side note: Sorry to come off as a wuss, but all of these mean tweets made me super-sad. The second result of today is that I'm not going to mean-tweet anymore. ?

Goldsher’s time there also led to some updating of his Wikipedia page:

How’d you think this was gonna go, dude pic.twitter.com/CPpKRXiajJ

(If you click the larger version of the image here, it shows that  the first sentence was changed from “musician and author” to “strikebreaker and scab.” It’s since reverted to normal.)

Well, it turns out it wasn’t Durant or Green showing up that Goldsher needed to worry about, but rather the rest of the internet. And that’s understandable, and should have been anticipated. There’s a lot of anger out there at G/O Media over their moves with Deadspin, including criticism from senators Bernie Sanders and Cory Booker, and the reaction to Goldsher’s piece certainly shows that. And that may cause some potential writers for the site to reconsider if they really want to go work there.

Also, it should be noted that G/O Media’s attempts to spin their “stick-to-sports” mandate as “what readers want” don’t hold up to data analysis, either from ex-Deadspin staffers, from business-side people formerly at the company, or from outside. The attempts to try and spin it as a reasonable business move simply don’t hold water if you look at what Deadspin actually published and how it performed. And prospective Deadspin writers should keep that in mind; the changes there aren’t about G/O Media pursuing a data-supported business strategy, they’re about the company telling its writers to avoid topics that previously were successful, and about writers and editors protesting the company’s actions.

At any rate, we’ll see what G/O Media tries next. And we’ll see if they’re still as “excited about Deadspin’s future” after their first attempt at hiring a replacement writer led to him quitting after less than an hour.

Update: For the moment, that appears to be republishing old freelance pieces as new.

Paul Maidment is pulling old freelance bits and republishing them with reset time stamps, in order to make the site appear fresh. there is no note acknowledging the republishing of two-year-old content