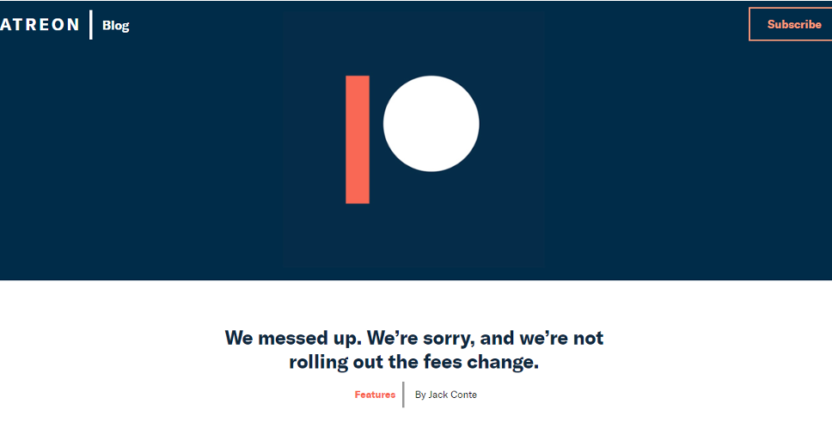 Last week’s move by Patreon (a subscription platform used by several sportswriters, from Jeff Gluck to Peter Vecsey) to announce planned changes to its fee structures in a way that included a 35-cent flat fee for each pledge drew incredible criticism, and after initially defending the change, the company has now walked it back.

The move was promoted as a way to let creators receive more of the pledged amount and pass fees onto those pledging, but many noted that it was really bringing much more revenue to the company, especially in the case of small pledges. That led to many people dropping pledges (even though the changes didn’t kick in until January), and some creators even leaving the platform for other alternatives.

And now, Patreon has recanted, with co-founder Jack Conte publishing a post Wednesday titled “We messed up. We’re sorry.” and confirming that they won’t go through with the change after all. Here are the key parts of that:

We’ve heard you loud and clear. We’re not going to rollout the changes to our payments system that we announced last week. We still have to fix the problems that those changes addressed, but we’re going to fix them in a different way, and we’re going to work with you to come up with the specifics, as we should have done the first time around. Many of you lost patrons, and you lost income. No apology will make up for that, but nevertheless, I’m sorry. It is our core belief that you should own the relationships with your fans. These are your businesses, and they are your fans.

I’ve spent hours and hours on the phone with creators, and so has the Patreon team. Your feedback has been crystal clear:

We recognize that we need to be better at involving you more deeply and earlier in these kinds of decisions and product changes. Additionally, we need to give you a more flexible product and platform to allow you to own the way you run your memberships.

But this move has already had its costs. Creators like Jeph Jacques of the Questionable Content webcomic have noted the massive impact to their bottom line from the proposed changes and the rebellion against them, with Jacques telling Abby Ohlheiser of The Washington Post he lost over 120 pledges in 12 hours last week and saying that the move would be disastrous for those who relied on $1 or $2 pledge levels. “What it means for me is that the vast majority of my patrons are, to put it mildly, extremely boned.”

And while some of those patrons may come back now that this change has been reversed, many may not, and supporters and creators both may be more skeptical of Patreon down the road, and more eager to try alternatives like Kickstarter’s forthcoming new version of Drip.

Patreon received $60 million in new funding back in September, and that’s led to many speculating that these changes were about trying to bring in more revenue for their investors. That’s perhaps an understandable goal, but doing so in a way that ignored such a large set of user behavior (in particular, the many people who use the site to provide a wide swathe of $1 pledges to different creators they like) and one that didn’t allow creators themselves to alter the terms backfired in a big way. And even though they’ve walked that move back now, the consequences remain, and there may still be more challenges ahead. While apologizing for how this went, Conte told Ohlheiser Patreon still plans to change its fees in some form:

By Wednesday, Conte said that Patreon was reversing the policy change. The fee structure still needs to change, Conte said. But not in the way they’d originally planned.

That mistake definitely lost them a lot of people. The question now is if those people will come back following this reversal, and if they’ll stick around following whatever fee structure change Patreon eventually comes up with.