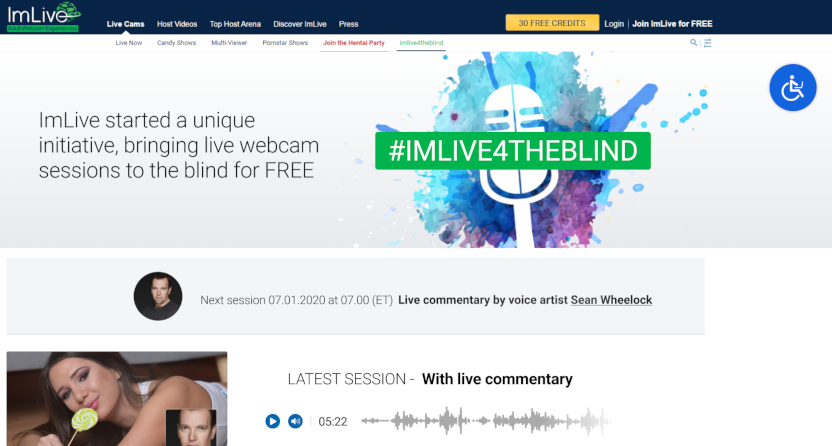 Back in April, adult entertainment site ImLive made headlines by offering Fox Sports’ Joe Buck $1 million to commentate on live cam shows for six weeks. Buck turned that offer down, as you’d expect, but ImLive has pressed forward with their plans to have sports announcers announce camming sessions for the visually impaired anyway. And they’ve now found some takers, including Sean Wheelock, known for MMA and soccer commentary. A rendering of the new ImLive4TheBlind site can be seen above; here’s more from ImLive’s release on what exactly is going on here:

ImLive.com, offering the largest variety of adult webcam experiences, announced today the launch of ImLive4TheBlind, a website dedicated to providing the visually impaired the live camming experience that millions around the world currently enjoy. The live sessions will be commentated on by a sports broadcaster giving the play-by-play on what’s going down so that the user can properly visualize what’s happening on the screen in front of them.

…Providing the narration to the cam session will be professional sports broadcasters who have been left jobless in the wake of the suspension of sports due to COVID-19. ImLive originally offered legendary commentator Joe Buck the opportunity to lend his voice to aid the potentially millions of visually impaired Americans who could benefit, but, while flattered, he respectfully declined. Inspired by the idea of others like Buck that were without a job, the company opened up to submissions from other commentators willing to work.

“I’m a broadcaster, my skills include being able to describe the action, whether it be on the field or in the bedroom, accurately and intimately enough so that viewers do not need to be able to see a screen to know what is going on,” said Sean Wheelock, one of the commentators for ImLive and a veteran of MMA and soccer broadcasts for Bellator and CONCACAF. “When you’re calling the play-by-play for the sporting event, you sometimes take for granted the people watching at home. Being able to participate in the project knowing that I’m enhancing a blind person’s enjoyment and pleasure in a chat that they otherwise would not be able to experience makes me appreciate the things that I maybe take for granted.”

As per the release, this will see broadcasters commenting live daily on select camming sessions. The audio will be broadcast to ImLive4TheBlind free of charge, and it will also be uploaded to the site afterwards. The first show Wheelock will be calling will be at 11 p.m. Eastern Wednesday night.

While the idea of using sports play-by-play to describe sexual situations is far from new, it’s usually in a more fictional setting, as with things like Yankees’ announcer Phil Rizzuto’s commentary in Meat Loaf’s “Paradise By The Dashboard Light.” Heck, there was enough deniability there for Rizzuto to later claim he was “was unaware that his contribution would be equated with sex in the finished song.” But there’s reason for skepticism to that claim; Meat Loaf told Jeff Pearlman in 2007 “Phil was no dummy — he knew exactly what was going on, and he told me such. He was just getting some heat from a priest and felt like he had to do something.”

And we’ve seen sports play-by-play used to describe sexual situations TV as well, including with Jim Nantz interviewing fictional How I Met Your Mother character Barney Stinson about his “perfect week” attempt back in 2010. We also saw it more recently with Hank Azaria’s fictional announcer Jim Brockmire calling sexual situations he participates in on Brockmire, and there have undoubtedly been other examples of this over the years too. So it’s not like the sports announcing world has never described sexual situations intentionally (and it’s also described them unintentionally many, many times.) But this is taking it to a rather new level.