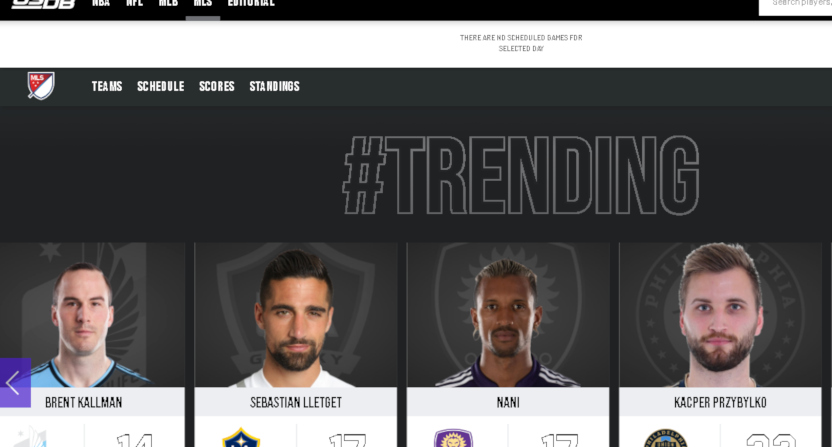 Back in April, the Online Sports Database (OSDB) launched with coverage of NFL, NBA, and MLB players. The site, founded by actor and producer Ryan Rottman and Green Bay Packers’ quarterback Aaron Rodgers, looked to be a sports version of the Internet Movie Database (IMDB) in providing not only stats on athletes, but also coverage of their off-the-field interests, business ventures, and charities, as well as ways to contact their management. OSDB raised $2.5 million ahead of its launch, and promised an expansion into other sports; they’ve now done that with Major League Soccer, and they’ve also added a couple of  NFL players to their editorial team, retired safety Donte Whitner and current free agent linebacker Cassius Marsh. Here’s more on that from a release:

…“Our successful launch in April has given us the ability to expand quickly to cover more sports, starting with the incredible group of players in MLS,” said OSDB Co-Founder and CEO Ryan Rottman. “We recognize the uniquely strong relationship between MLS players and their fans, and through OSDB, hope to deepen those connections while empowering athletes to maximize their off-the-field potential.”

OSDB also announced today two new athlete columnists joining the editorial team: retired 2-time NFL Pro Bowl Safety Donte Whitner and veteran NFL linebacker Cassius Marsh. Since retiring from the NFL, Whitner has dedicated himself to promoting financial literacy among pro athletes while working for Kirtland Hills Capital, and will write a column blending finances and pop culture. Marsh, who owns his own sports and trading card shop Cash Cards Unlimited in Southern California, will write about the business of cards and games, including sports, Magic: The Gathering, Pokémon and more.

It’s interesting that both Whitner and Marsh went from subjects of OSDB features (as shown in those last two links) to people writing for the site. And those features illustrate some of what OSDB has been trying to do in terms of showcasing athletes’ off-the-field interests. That fits with what Rottman told AA back in April about what he and Rodgers felt was important for the site:

“After talking to Aaron about the landscape of sports reporting, it was clear there was a void. Aaron felt there wasn’t enough reporting and highlighting athletes’ individual interests. There’s a ton of athletes out there that have achieved success in so many areas of life, but you never hear those stories. Not many people know Cole Beasley has a rap album called “The Autobiography” or that Thaddeus Young has invested in 85 companies. We’ve taken the approach that x’s and o’s are a big part of sports, but we want to celebrate the athlete for their entire body of work. Additionally, we feel the more you know about an athlete the more you will support them on and off the field.”

The new columns from Marsh and Whitner certainly have some potential to draw public interest. There’s a lot of discussion of the business of cards and games at the moment, especially with the recent moves by Fanatics to edge out Topps, and the idea of a finances-focused column that also works in pop culture and is written by a former NFL star has some merit as well. Beyond that, it’s also definitely notable to see OSDB expanding the sports they’re covering, and to see them pick MLS for their first post-launch expansion; in April, Rottman had said that their first targets were the NHL, the WNBA, and esports. We’ll see where they go next.