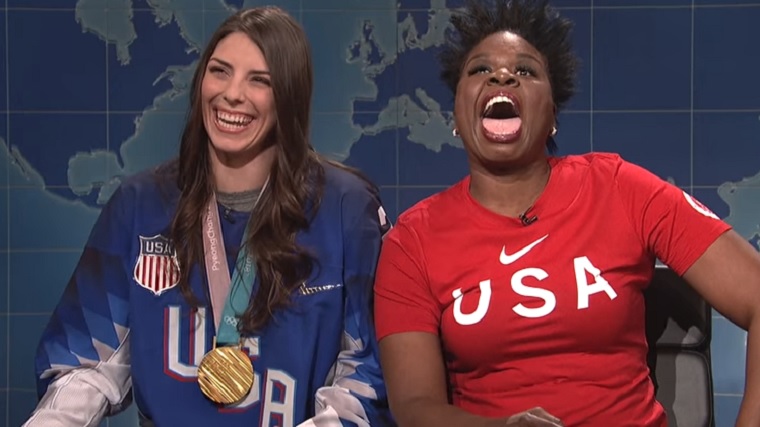 OK, we’ve milked quite a bit out of this weekend’s Saturday Night Live, hosted by Charles Barkley. Guilty as charged. We noted Barkley’s monologue supporting athletes speaking out, and highlighted Alex Rodriguez’s appearance in a sketch. But there’s one more sports-related sketch that we didn’t get to, and we’ll make up for that now.

SNL‘s Leslie Jones was a part of NBC’s coverage from PyeongChang, making her biggest impact on social media by ripping Pierre McGuire’s in-game interview of U.S. hockey player Gigi Marvin. Jones was mad that McGuire asked Martin about the team’s losing the gold medal game at the Sochi Games while the U.S. was playing for gold in South Korea.

As she explained during an appearance on Saturday’s Weekend Update segment, Jones became a big hockey fan during the Winter Olympics. (“How come nobody told me about hockey? It’s violence on ice!”) And that led to arguably the best-known member of the gold medal-winning U.S. women’s hockey team, forward Hilary Knight, stopping by Studio 8H.

Poor Colin Jost. A friendly — well-meaning, but maybe a touch condescending — offer to teach Jones some hockey moves was shot down hard, but probably in the best way possible. No offense, Colin; Jones will get her hockey tips from the Olympic gold medalist. OK, maybe his feelings were a little hurt by Knight telling him, “Youz a bitch!” Still, girls rule the world.

Believe it or not, there was actually a little bit of controversy surrounding Knight’s SNL appearance. How is that possible? Did someone object to Knight using the word “bitch”? No, this was about an Associated Press headline. The headline has since been changed, but here’s how it was originally tweeted out:

The idea, albeit based on the headline, that the U.S. women’s hockey players were “trying to extend” their current fame — using Knight’s SNL moment and Meghan Duggan’s appearance at the NHL’s Stadium Series outdoor game in Annapolis as examples — and popularity drew a surprisingly fiery response from the National Women’s Hockey League on Twitter.

Yes, that tweet has been taken down. Before it was, however, writer Stefanie Gordon was among those who called the NWHL out for an angry response that does nothing to help perception of women’s hockey. Not to mention that it was terribly unfair to the AP story.

May I suggest reading the article before yelling “idiotic” and “you suck”?! Yes, the headline wasn’t great, but the article is good and very “pro” these wonderful athletes. https://t.co/mv7XjDtwn5

C’mon, people — aren’t we all on the same team here? No need to be so defensive, NWHL social media person. (Oh, and also read the article before reacting to the headline. This message is brought to you by everyone who writes everything available on the internet.)

Hopefully, the big takeaway here is a women’s hockey player and U.S. gold medalist appearing on Saturday Night Live and getting laughs. That was fun. I might show my nieces that bit (although their mother will probably appreciate me hitting pause or closing the screen before the “bitch” line).