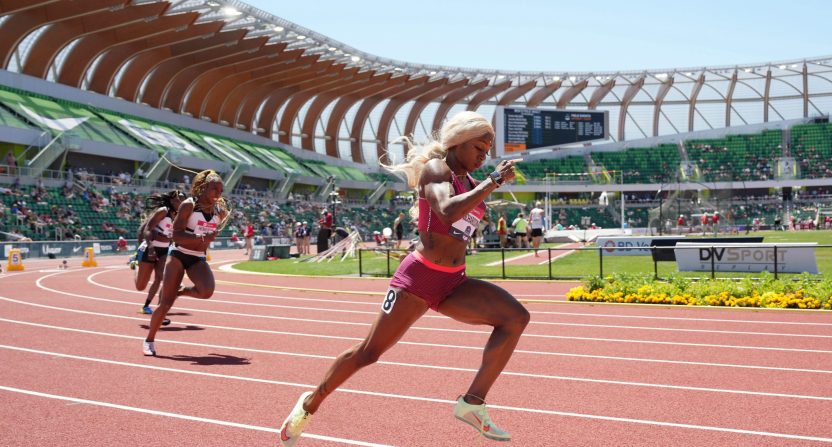 After a tough outing in the 100-meter competition at the USA Track & Field Outdoor Championships on Thursday, sprinter Sha’Carri Richardson failed to qualify for the 200-meter final on Sunday, which means that the 22-year-old will miss the World Championships this year.

Following both stunning finishes, Richardson ignored the media pool lined up to speak with her.

Sha’Carri Richardson runs past the media after failing to advance in the 100m pic.twitter.com/5SArO6IaHR

American Sha'Carri Richardson (@itskerrii) has just run 22.47 for 5th & will not qualify for the 200 metre finals at the US trials.

Having also failed to qualify in the 100 metres, Richardson will miss the World Championships in Oregon.

However, Richardson would later reappear on Sunday to provide a statement to the reporters on hand and the media in general.

Richardson was asked by a reporter if she would comment on the rough weekend, to which she responded “no” and then asked for more respect in the way the media covers her and her fellow athletes.

“What I have to say – y’all can all take this interview and do whatever you want to do with it – I’m coming to speak not on just my behalf but all athletes’ behalf,” said Richardson.

“That when you guys do interviews, y’all should respect athletes more. Y’all should understand them coming from whether they’re winning, whether they’re losing, whatever the case may be… athletes deserve way more respect than when y’all just come and throw cameras into their faces. Understand how an athlete operates and then ask your questions. Then be more understanding of the fact that they are still human, … Y’all just trying to get something to put out an article to make a dollar. Thank you.”

Sha’Carri returns to the media to make a statement… pic.twitter.com/bJ4yVtR3Is

Richardson’s relationship with the media has been rocky since the Tokyo Olympics, where she was considered a favorite to medal until she was forced to vacate her spot in the 100-meter-dash and received a one-month suspension after testing positive for marijuana. She was also left off the U.S. team as part of the relay pool, which excluded her from participating in the 4 x 100 relay.

As for where the former national champion goes from here following the disappointing results, that remains to be seen. The same goes for the media coverage she’ll receive because of it, especially as she continues her push to qualify for the 2024 Summer Olympics in Paris.