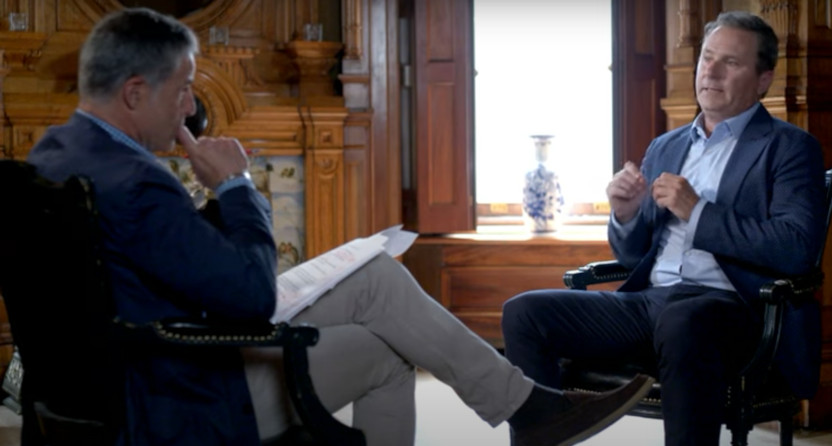 The discussion around Russian Olympic athletes doping, and allegations of state involvement in both orchestrating that and covering it up, has been an important part of the sports discourse over the past few years. Much of that has focused on comments about how these scheme happened, particularly those from Dr. Grigory Rodchenkov that were featured in Netflix documentary Icarus (which won the Best Documentary Oscar in 2018).

But the other fascinating piece of the puzzle is how the World Anti-Doping Organization and the International Olympic Committee handled it. That includes with the 2018 Winter Olympics ban on Russia competing as a country, but allowance of Russian athletes to compete. And that’s a key part of a wider feature on WADA in this month‘s Real Sports with Bryant Gumbel, helmed by correspondent Jon Frankel, that premieres Tuesday night (10 p.m. ET/PT) on HBO (also available to stream on HBO Max).

This Real Sports segment looks at WADA overall, including low test rates and seemingly-overzealous prosecution of positive tests that outside scientists have called into question. It looks at WADA’s structure, which includes receiving 50 percent of its funding and near 50 percent of its executive committee members from the IOC, with two recent board members (Anders Besseberg and Tamás Aján) leaving after they were implicated in bribery scandals. And it features an extensive interview with former WADA deputy to the director general Rob Koehler, the former No.2  at that organization, and someone who worked there for 18 years before leaving recently. Koehler has a lot of notable things to say on conflicts of interest and overall reform, but one specifically interesting bit is where he tells Frankel he was told to “back off” on his push for disqualification of Russian athletes, not just the country.

The key discussion there:

Rob Koehler: It was stated directly to me that “Russia is the most powerful sporting nation. The IOC is a 50 percent partner. And we don’t want to piss them off, so back off.”

Jon Frankel: You were told that explicitly?

Jon Frankel: The IOC wanted the Russian athletes in the games?

Rob Koehler: 100%. They were more interested in protecting Russian interests than they were clean sport.

Later, to end the segment, Koehler has quite the line on WADA going forward.

“There’s too many conflicted actors, too many perceived and real conflicts of interest. …The WADA structure is a broken structure.”

The segment includes many WADA responses as well, including Frankel interviewing current WADA director general Oliver Niggli (seen towards the end of the above clip). But Niggli’s response to that particular claim from Koehler is not all that convincing:

“I don’t know what Mr. Koehler discussed with whom, but I would be factual. The factual thing is what? That WADA in the end punished Russia. There’s never been any impediment in pursuing this Russian case. We did our homework and we went till the end of this fight.”

The question is if WADA really did punish Russia, though. They certainly didn’t stop many Russian athletes from competing in the most recent sets of Olympics, only from using their flag. And that’s particularly powerful in contrast to the cases where WADA zealously pursued other athletes, even when peer-reviewed scientific papers disputed their conclusions. (One key story there, of Czech triathlete Vojtěch Sommer, is explored in detail in this segment, with Frankel interviewing both Sommer and one of the Norwegian scientists who took up his case.) The WADA segment here is a fascinating watch, and it’s one that raises a lot of questions for that agency going forward.

This WADA segment, helmed by correspondent Frankel, is produced by Max Gershberg. Other segments on Tuesday’s Real Sports include one on Raiders’ tight end Darren Waller’s work to help those struggling with addiction (correspondent David Scott, producer Evan Burgos), a feature on professional mountain biker Casey Brown’s career and perseverance through tragedy (correspondent Andrea Kremer, producer Jake Rosenwasser), and an update on U.S. tennis star Frances Tiafoe and how far he’s come since Real Sports first profiled him in 2017 (correspondent Mary Carillo, producers Beret Remak, Hannah Vicente-Kliot). Joe Perskie is the executive producer of the overall show. This month’s episode will premiere Tuesday night at 10 p.m. ET/PT on HBO, and will also be available to stream on HBO Max.