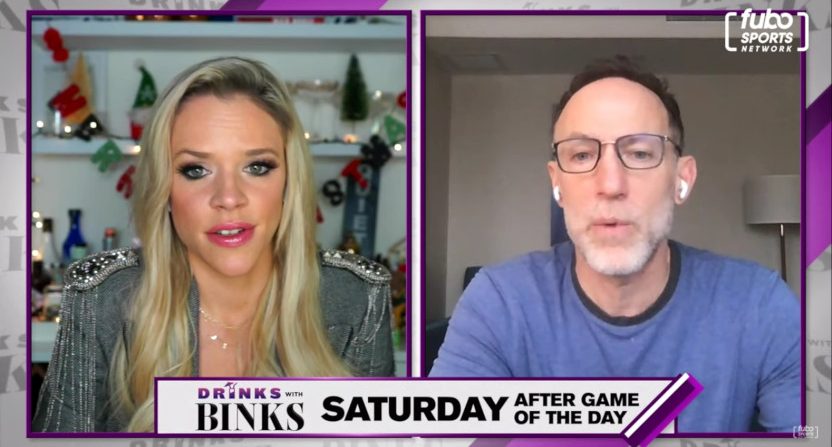 We don’t yet know who will be calling Olympic men’s and women’s hockey games for NBC at the Beijing Games in February 2022, or covering the tournaments there for SportsCenter and other ESPN properties, but one possible candidate won’t be attending those Olympics at all. That would be ESPN’s Ray Ferraro. Ferraro discussed that decision this week with Julie Stewart-Binks on her Drinks with Binks fubo Sports Network show, with that conversation set to air in full on fubo Sports Network Saturday at 10:30 p.m. ET. Here’s that clip:

Ferraro starts by saying “It was hard to do, but I’m not going to go do it, and 100 percent, it was because of last year [presumably the NHL playoff bubble, which he was in for TSN]. I thought ‘I just did this [quarantine/bubble] for three weeks, I cannot do it again. It’s not good for me to do again.’ And I’m going to hate not doing it, in particular if the NHL guys go, I’m going to hate it. I’m going to feel like I missed out. But I just couldn’t do it.”

Stewart-Binks says “It’s so much to put yourself through. I also turned it down as well, for different reasons, but also some of the same. It’s a lot to put yourself through while you’re also trying to do your job and dealing with a global pandemic that isn’t eradicated yet. And there are also so many other reasons in China that are problematic.”

Ferraro says “I was going to say, Julie, that if it were different, if it was in almost any place else, I might have thought differently. I’m just, staying behind in China for two weeks really didn’t do it for me.” Stewart-Binks says “Why not? What could possibly go wrong?” with a laugh, and Ferraro says “You have to think of the worst-case scenario. You have to. So, okay, they come back, the league starts, my job [with ESPN] starts, and I’m in quarantine in China. Oh, I’m sure my employers are going to be thrilled with that.”

Stewart-Binks says “You don’t know what health you’re in at that point, too, when you’re at the hospitals and all the stuff, it’s a lot.” Ferraro says “For me, it was hard, but once I let it go and said ‘Okay, I’m not going to do it,’ I haven’t really thought about it again. I know I made the right decision for me.”

Going to the Beijing Games or not likely won’t be an easy decision for many, especially with criticism of China amping up around decisions from the U.S., UK, Australia, Lithuania, Canada and more to conduct a diplomatic boycott of those Olympics. (Those countries will still be sending athletes, but not the usual diplomatic delegation.) The U.S. decision there came with a rationale of “given the PRC’s ongoing genocide and crimes against humanity in Xinjiang and other human rights abuses” from White House press secretary Jen Psaki, in reference to abuses of Uyghur Muslims in the Xinjiang region.

But there are many other things to consider with China too, including governmental crackdowns on pro-democracy speech in Hong Kong (a situation that previously led to a notable NBA–China dispute) and the recent censorship of tennis star Peng Shuai around her accusations of sexual assault against a government official, which led to the Women’s Tennis Association suspending its tournaments in China. And beyond that, there are definitely the specific physical, mental, and time concerns Ferraro cites around quarantine and pandemic restrictions. So there will likely be quite a few media members who normally would attend the Olympics who are opting not to do that this time around, for one reason or another.

The specific notes Ferraro strikes on mental health challenges from a quarantine/bubble standpoint are good things to consider as well. Bubbles were particularly important for getting the NBA and NHL seasons completed last year, especially in a pre-vaccine environment, but they do take a toll on everyone involved. And while there are expected to be more amenities than normal inside the Olympic bubble, including restaurants and shopping, it’s a giant bubble that involves media, athletes, staff, and volunteers, so there are certainly some risks there.

The full Binks-Ferraro conversation will air on fubo Sports Network at 10:30 p.m. ET Saturday, part of a back-to-back run of Drinks with Binks episodes that starts at 10 p.m. ET.