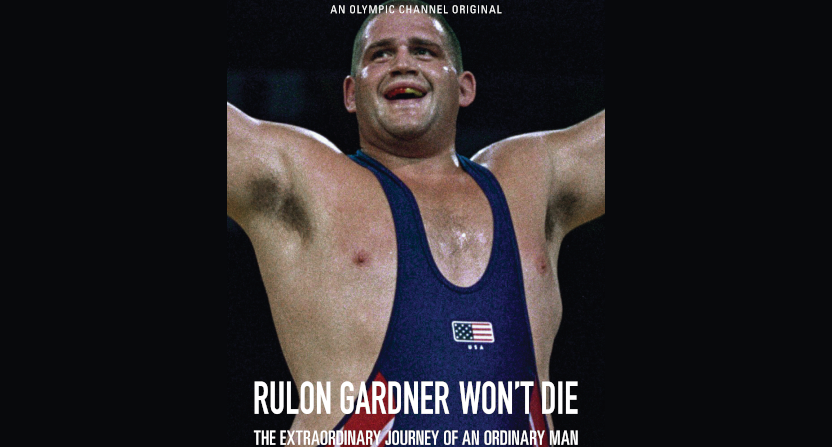 While there won’t be an actual Summer Olympics this year, there are several Olympic sports documentaries on the way. The IOC’s global Olympic Channel announced Wednesday that they’ll have four further documentaries in the Five Rings Films series debuting in 2020 and 2021, with the first one, Rulon Gardner Won’t Die, set to premiere June 3. Here’s more from that release:

The first film, Rulon Gardner Won’t Die, premiering June 3, 2020, tells the story of Rulon Gardner, a Wyoming boy raised on a farm, who twenty years ago shocked the world at the Olympic Games in Sydney and overnight became an American icon. Gardner, a newcomer to the world’s stage, did the unthinkable and beat the unbeatable – taking home gold when he beat the world’s number one wrestler and an icon of the sport, Aleksandr Karelin of Russia. Instant fame came after the miracle on the mat, followed by tragedy and adversity, including near-death experiences, crushing weight gain and bankruptcy. Now, he’s returned to wrestling as a high school coach and is trying to make sense of his legacy – both as an American icon and a cautionary tale for what can come after a miracle.

Following the premiere of Rulon Gardner Won’t Die (directed by Adam Irving), the Olympic Channel will also debut three additional films in 2020 and 2021:

Gardner’s story is certainly interesting, from both his incredible Olympic victory (Joe Posnanski’s “I Really Didn’t Need That Stew” provides a good look at that remarkable story) to his path since then, including his decision to turn down WWE, the snowmobiling accident that saw him catch frostbite and lose a toe, his single MMA fight, how he lost his money in a Ponzi scheme, his time on The Biggest Loser, and much more. And Irving is a notable documentary figure, particularly for directing 2016’s Off The Rails. As with previous Five Rings Films documentaries (The Nagano Tapes, The People’s Fighters, and The Golden Generation), these will be produced by famed Hollywood figure Frank Marshall and Mandalay Sports Media (involving Mike Tollin and Jon Weinbach), and they’ll be available via olympicchannel.com and its mobile apps.