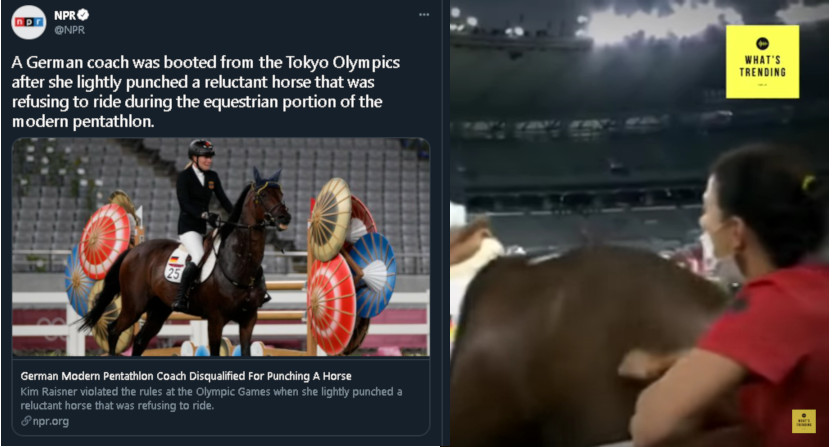 Selecting the right words to describe something can be difficult, and that’s perhaps particularly true for physical contact. Words like “tapped,” “struck,” “hit,” and “punched” all might be used to describe the same contact, but they carry different connotations around the perceived force of the contact (and even more so once modifying adverbs are thrown in). And that leads to different conclusions and objections from readers. The latest case where this has come up is with a NPR tweet of a story they published Saturday (from Matthew S. Schwartz) on the disqualification of German modern pentathlon coach Kim Raisner. The story is headlined “German Modern Pentathlon Coach Disqualified For Punching A Horse,” but it describes her contact as a “light punch,” and that led to the tweet using “lightly punched”:

A German coach was booted from the Tokyo Olympics after she lightly punched a reluctant horse that was refusing to ride during the equestrian portion of the modern pentathlon. https://t.co/HarAyfc9Yu

Before any further discussion of this, it’s worth looking at actual video of the incident, which happened during Friday’s modern pentathlon:

There are a million different opinions on Raisner’s actions, from PETA using this to call for an end to Olympic equestrian events to people saying this isn’t a big deal because of the low level of force involved. The actual consequential actions so far came from the International Modern Pentathlon Union giving Raisner a black card of disqualification Saturday and sending her home from the Olympics, which is what prompted the stories from Schwartz and others.

Whether there should be further punishment for her and whether equestrian events should be banned from the Olympics entirely is beyond the scope of this piece. The interesting discussion here from a media perspective is the debate that spun up around NPR’s coverage, and around their usage of “punched” and “lightly punched.” “Punched” or “punching” was used by many outlets, from Yahoo to the BBC to Fox News, but  “lightly punched” seems original to NPR, and it took a lot of criticism. Here’s some of that:

“Lightly punched”? Seriously?! It was egregious enough to get the coach disqualified from further involvement in the games. You’re really going to downplay animal cruelty?! GTFOOH! Jackasses. #AnimalCruelty #NPR

You don’t lightly punch. She punched a horse and should never be allowed near an animal ever again!!!!! https://t.co/Ow9wbXhsEm

From the video, it’s maybe somewhat understandable how Schwartz came up with “light punch” in the body of his story, and how NPR then used “lightly punched” in their tweet. The contact Raisner makes here is with a closed fist, which is necessary for something to be described as a punch. But it’s not a normal forward punching motion; it’s her flicking her hand out sideways and making contact with the horse’s flank. And it’s not what many people would necessarily describe as a punch.

But the usage of “lightly punched” in NPR’s tweet has drawn a whole lot of attention to that particular tweet and story, more than for other organizations’ coverage with different wordings. And some of that might be around cultural connotations. Reading “punched a horse” brings up very different mental images for many than what Raisner actually did. For at least some, it’s going to bring up Alex Karras’ scene (as Mongo, only a pawn in the game of life) of punching a horse (in a very different and much more forceful way) in 1974’s Blazing Saddles.

That scene has been discussed and debated and criticized more than almost anything else in Blazing Saddles, which is really saying something. Of note, Karras didn’t actually punch that horse; as Joel Stice wrote in a 2016 retrospective at Uproxx, there were two horses on set trained to fall down, and Karras didn’t actually hit the horse. (Interestingly, that scene was based on a story of a real horse punch, from Mel Brooks’ earlier boss Sid Caesar.) But that scene still sparked outrage and letters from animal rights activists at the time, and it wound up featured in many of the obituaries on Karras. And often when there’s a “horse punch” now (many of which are actual punches, and much harder than what Raisner or Karras did), media coverage brings up Karras. And that image pops into people’s heads when they hear “punched a horse,” and “lightly punched” is so incongruous with that image that it creates dissonance.

On some levels, there’s maybe some logic to how NPR approached this. The descriptions of “light punch” and “lightly punched” do suggest that this is not Mongo clocking a horse. And there’s maybe a case for that versus the Yahoo/BBC/Fox News straight “punched” (although it’s notable that NPR’s headline still went with “punched”); while Raisner’s action here meets the requirements for a punch, it’s not what springs to mind as a punch, and the attempt to modify with “lightly” helps to show that. But adverb usage like that comes with a huge amount of problems of its own, as it’s bringing something very subjective into the discussion (what exactly does “lightly” mean?). And that’s an argument for instead using words like “hitting” (as CNN did) or “strike” (as the International Modern Pentathlon Union did in their statement, quoted in the CNN piece); those words feel less connotative, and less declarative on the level of the contact, and they provide more of an urge to go watch the video for yourself.

And really, it feels like that video should be at the core of all of these stories. The concrete elements here are that Raisner struck the horse and that the International Modern Pentathlon Union disqualified her as a result. Whether that punishment is not enough, just right, or too harsh is a matter of opinion, as is if there should be further fallout from this ahead of future equestrian events. But the crucial element for any of those opinions is what actually happened, and the video shows that much better than any collection of verbs and adverbs can. So this is perhaps overall an argument for using less connotative words and avoiding adverbs in controversial stories like this. At any rate, the “lightly punched” approach certainly didn’t go too well for NPR.