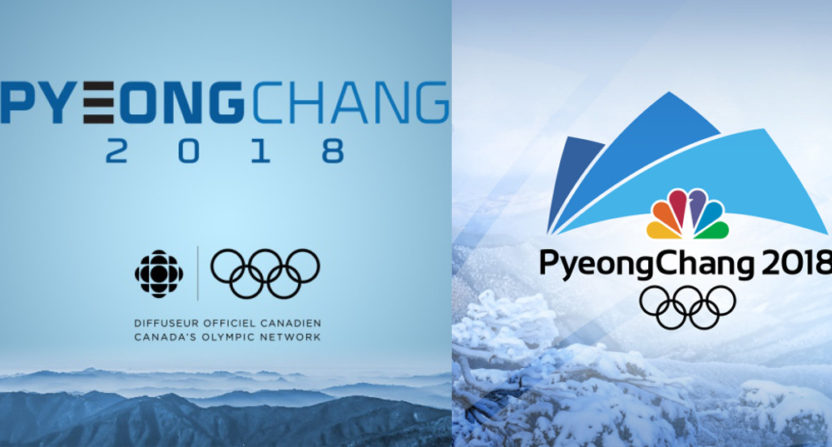 The trend in Olympic ratings is dramatically different depending on which side of the Canada-U.S. border you examine. For the 2018 PyeongChang Winter Games, NBC’s primetime ratings were down 17 percent on average from the 2014 Sochi Olympics, averaging 17.8 million viewers. While their coverage could still boast some successes (streaming consumption, performance relative to the rest of TV, money made from ad sales, and the performance of NBCSN), the overall picture continued the decline we saw for the last Summer Olympics in Rio in 2016 (also down 17 percent, relative to the 2012 games in London).

The decline’s less significant if you throw in the side-by-side coverage on NBCSN during primetime, something that wasn’t available in Sochi (and something that likely played a role in NBCSN’s addition of an estimated 646,000 homes from February to March.) Combining those buckets gives an average of 19.7 million viewers, which would be a seven percent decline from Sochi. But that’s still a drop.

Things have been different on the other side of the border, though. Canada saw a big jump for those 2016 Olympics as compared to London (up 23 per cent total day, up 11 per cent in primetime), and that appears to have continued for the 2018 Games relative to Sochi.

In Canada, the audience for CBC’s primetime coverage was up from 2.7 to 2.8 million viewers on average early on, with 23.4 million Canadians watching at least part of the first weekend’s Olympic coverage across English and French TV networks, almost 65 per cent of Canada’s estimated population (36.29 million in 2016). And that got even better by the end of the Games, with an average minute audience of over 3 million viewers. Plus, a whole lot of Canadians watched at least part of the coverage:

Between the Opening Ceremony and the Closing Ceremony — 31 million Canadians (more than 85 percent of the population) tuned in to watch CBC/Radio-Canada’s coverage of the Olympic Winter Games PyeongChang 2018 across all English and French television network partners.

The closest available comparison for NBC appears to be from a Feb. 24 release about the combination of the Super Bowl and Olympics giving them the “Best Feb. Ever”, which offered this:

Since Super Bowl Sunday, more than 229 million Americans tuned into the networks of NBCUniversal – far surpassing all other media companies. Millions more streamed the action live on NBCSports.com, NBCOlympics.com, and the NBC Sports app, while even more experienced the events on a multitude of social media platforms.

So a larger percentage of Canadians tuned in, and the Canadian audience rose from Games to Games while the U.S. audience fell. Of course, those Canadian audience figures are considering multiple networks, so it makes sense to consider the NBC+NBCSN numbers for the U.S. as a comparison, but those numbers are still down (albeit less dramatically, and in line with other sports ratings declines), while the Canadian numbers are up.

It’s also notable that while the U.S. saw plenty of complaints about the PyeongChang time zone (which meant many big events happened in the middle of the night in North America), the CBC saw a huge audience boost for that window:

Canadians stayed up for the Games, with CBC’s overnight audience growing by 767 per cent.

That average audience boost from 2.7 to 3 million viewers (nine percent) is also significant. And yes, that was helped by a couple of big events involving Canada, especially Tessa Virtue and Scott Moir’s free skate for ice dancing gold and the U.S.-Canada gold medal hockey game:

4.8 million viewers at 2:11 a.m. ET, at the end of the Canada vs. USA women’s gold medal hockey game, when Team USA scored the winning goal against Canada in the sudden-death shootout, on Day 13 (Thurs. Feb. 22) (CBC, TSN1, TSN2, Sportsnet and Sportsnet ONE)

But there were plenty of big events involving U.S. athletes too, from that hockey game through the gold-medal curling match and tons of golds in skiing and snowboarding. And yes, Canada did better relative to its Sochi performance (25 to 29 medals, 10 to 11 golds) than the U.S. (28 to 23 medals, 9 to 9 golds), but it’s not like the U.S. particularly struggled in these Games.

So, could it maybe be about coverage decisions? While there was some improvement from NBC in covering the Games as sport rather than as pre-manufactured drama this year, and especially in letting those on the West Coast watch live (both on streams and on TV, something that wasn’t the case for much of the Rio Games), there are still plenty of critics of their approach to the Olympics, and there seem to be less people blasting CBC’s coverage (except for when it comes to grilling curlers after a tough loss). CBC also appeared to emphasize more live events and less material from earlier, and maybe that helped.

It’s also possible that at least some of this is about general interest in the Winter Olympics. It should be noted that the Winter Games are the less important event for NBC, with their 2016 summer primetime coverage averaging 25.8 million viewers (NBC-only; 27.2 million for NBC plus cable, 27.5 million in total audience delivery). While that’s a decline from the last Summer Games, the NBC-only numbers are 8 million viewers (31 percent) ahead of the numbers for these Games.

By contrast, CBC’s Rio primetime coverage was up 11 per cent, but only to 2.32 million viewers on average, much (23 per cent) less than the numbers for these Games. The Winter Olympics are the main event in Canada, not summer’s lesser cousin, and while there are plenty of debates about which event is better, the viewers in Canada and the U.S. differ there.

It’s unclear exactly what’s behind these differences is (slower cord-cutting and less streaming service options in Canada might also be a factor, as might some other elements), but it is obvious that CBC’s Olympic coverage is showing a positive trend in the numbers over the past few Winter and Summer Games. And that’s interesting to contrast with the declines we’ve seen for NBC. The Olympics obviously still have a lot of value to them, as they’re dominant relative to the rest of TV and are bringing in big money, but those primetime ratings definitely are dropping. And that’s not the case in Canada.

Maybe the CBC’s gains are from factors NBC can’t access (Canadian passion for Olympic sports, the Canadian TV landscape), or maybe they’re about things NBC could try too (even more focus on live, on covering the sports elements, and on particular events instead of packages), but regardless of what’s behind it, the Olympic ratings are trending much better in Canada than they are Stateside.