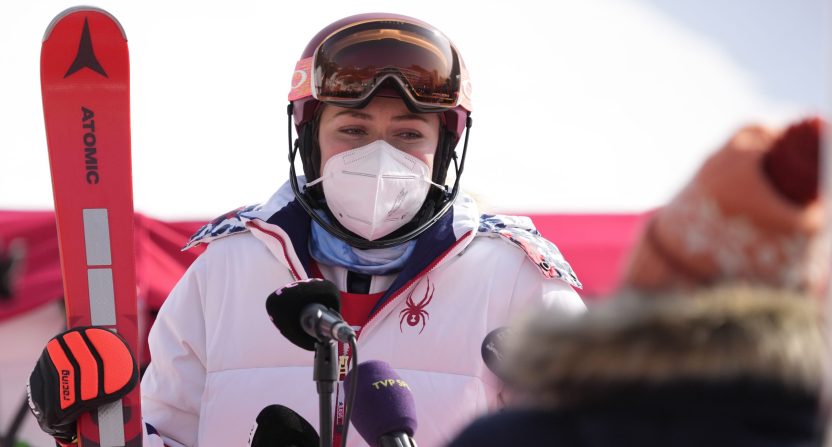 When people point to the myriad reasons that the Beijing Winter Olympics don’t appeal to them, coupled with the flailing viewership numbers that seem to back that up. NBC would probably tell you that they think that broadcasting the Olympics remains worthwhile because it’s compelling television featuring some of the most gifted athletes in the world in their rawest moments.

We tend to assume those moments are more like figure skater Nathan Chen’s record-breaking performance from earlier in the week. However, it often means that we’re talking about skier Mikaela Shiffrin’s heartbreaking fall in the women’s slalom on Wednesday. While one might spark a celebration, the other can send someone into despair. But in the eyes of an Olympics broadcaster like NBC, there’s no difference when it comes to maximizing their coverage of that moment.

For better or worse, those moments are what they’re paying for. But in the case of Shiffrin, some viewers didn’t appreciate it.

The two-time Olympic gold medalist and six-time world champion already had a pretty bad start in Beijing, crashing on the giant slalom. Early in her run on the slalom on Tuesday, she missed a gate, which meant she was disqualified. It was a shocking moment, as made clear by the NBC announcers’ reactions.

NBC’s cameras lingered on Shiffrin as she sat down on the snow, head in her knees as she dealt with the emotional toll of what had just happened. Meanwhile, it was clear that other skiers were making their runs while NBC stayed on the image of  Shiffrin.

She then gave a tearful interview in which she had to catch herself while discussing the misstep, clearly still deep in thought and pain.

“Pretty much everything makes me second-guess the last 15 years, everything I thought I knew about my own skiing and slalom and racing mentality,” said Shiffrin. “Just processing a lot for sure and I feel really bad.”

It was a raw, honest, and human moment. The kind of moment that makes you forget about all of the shady and off-putting details that surround the Olympics for just a few minutes to remember that we’re watching human beings attempt to excel at the highest levels of their sports.

Gutted for @MikaelaShiffrin but this does not take away from her storied career and what she can and will accomplish going forward. Keep your head high ❤️ pic.twitter.com/fSgqSii0JA

However, some viewers didn’t appreciate the way that NBC lingered on Shiffrin post-race and made her do the interview in the first place, seeing it as rubbernecking on a tragedy at the expense of other skiers. Some also compared the moment to when Simone Biles withdrew from competition during the Tokyo games.

Geez, even when they were showing the women's slalom, once Shiffrin went down they stayed on her even during the commercials even as medal contenders headed down.

NBC learned absolutely nothing from Simone Biles and now they are doing the SAME thing to Mikaela Shiffrin and it’s infuriating.

The moment also brought up a conversation around whether or not it’s healthy for NBC to hype up Olympic athletes, creating an outsized pressure that may have an impact on their performance.

at some point NBC has to examine the effect that creating outsized PR campaigns around individual athletes has on the athletes performance. Nathan Chen, Simone Biles, Mikaela Shiffrin—can't keep calling it coincidences.

seeing a LOT of similarities between Simone Biles this summer in Tokyo and now Mikaela Shiffrin in Beijing… perhaps the pressure we put on these female athletes (who are publicly suffering mental pain) is too much???

nbc talking about all the pressure being put on mikaela shiffrin pic.twitter.com/okccdgHpVo

Certainly, the discussion around the way Olympic athletes are pawns for the entities that make money off of the games is a valid one, and NBC is just one of the dozens of companies who do so.

It’s probably worth noting that the pressure that Olympic athletes, especially American athletes, feel to win gold or be seen as a failure is not new. This was a phenomenon long before NBC entered the chat. American Exceptionalism has always demanded that our athletes are the best in the world or else they aren’t good enough. It’s not just about the athletes who fail to finish their events. Plenty of Olympians with silver and bronze medals are seen as ‘less than’ simply because they didn’t win gold.

That’s not fair and it never has been, but it’s always been there. Did we learn nothing from “Dan and Dave?”

Perhaps the flailing viewership numbers will cause NBC to rethink their strategy when it comes to how they promote the Olympics, but finding a better alternative seems impossible. What other reason would American audiences have to tune in other than to get emotionally invested in seeing U.S. athletes try to succeed? It’s hard to imagine that the data they’re seeing tells them there’s an alternative that makes financial sense based on what they’ve paid.

NBC may be at fault for commodifying Mikaela Shiffrin’s pain, but they didn’t linger on it because they’re monsters. They lingered on it because we’re all monsters.