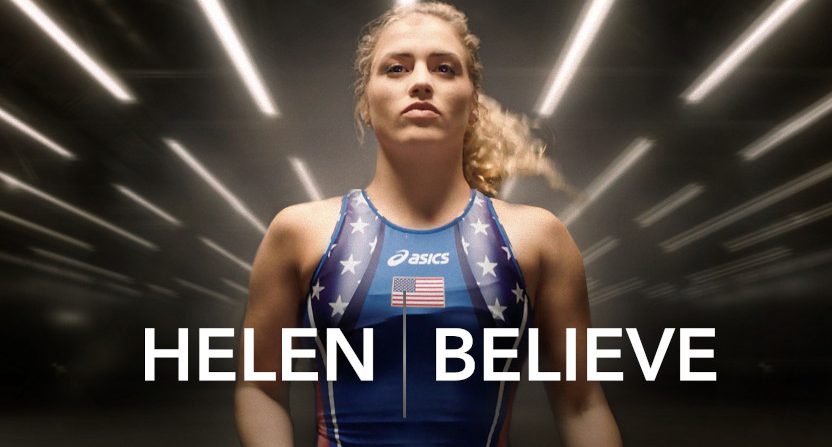 Last week saw the announcement of upcoming documentary Helen | Believe, a film following American wrestler Helen Maroulis through from her training for the 2020 Tokyo Olympics. Maroulis picked up an unexpected 2016 gold medal at the Rio Olympics (the first time an American woman had ever won Olympic gold in freestyle wrestling) after beating 13-time world champion Saori Yoshida, but suffered a severe in-match concussion in 2018 and battled aftereffects from that for years. The documentary follows her struggle with that and how that impacted her training for last year’s Olympics, where she won bronze. Helen | Believe, directed by Dylan Mulick, is a partnership between Religion of Sports, Chris Pratt’s Indivisible Productions, and Reserve Entertainment. Maroulis spoke to Chicago’s WGN Morning News Wednesday about it, and about the growth of women’s wrestling in general:

The most remarkable comments there may be around 2:23, where Maroulis talks about her traumatic brain injury and recovery from that, which is a key focus of the documentary:

“I got my first concussion overseas in India, and it just was mismanaged. When I came back, it took months to heal from. And then I ended up getting another one, and basically another one. I just kept telling myself that ‘The next one, I’ll retire, the next one, I’ll retire.’ Finally, I kind of had to keep my word on that. I really thought I was done with wrestling. And honestly, it’s such a blessing that I was able to come back. And through wrestling, I was able to heal as well, going back to where it all started and using that as a way to heal in a sense. I never thought I’d be back on the mat, but I got to do that, and go to Tokyo, which was a dream come true.”

Maroulis’ story is quite something, and this documentary exploring her path back from the anxiety disorder, depression, severe post-traumatic stress disorder and chronic pain she battled in the wake of that 2018 concussion should be well worth watching. We’re seeing more and more come out about the effects concussions can lead to on a wide variety of fronts, and Maroulis’ story of managing to overcome those severe aftereffects to again shine on the Olympic level is remarkable.

It’s also interesting to see Pratt’s Indivisible Productions involved with this. In a release last week, Pratt said his wrestling background (he wrestled growing up, including through high school, even if he’s not quite ready to take on Dave Bautista) made Maroulis’ story stand out to him.

“I grew up as a wrestler. I have such appreciation for the commitment, sacrifice, and dedication required to compete at such a high level. Helen’s story is nothing short of incredible. I knew immediately I wanted to be part of sharing it with the world.”

Here’s a short 30-second teaser trailer for the documentary that came out last week:

There haven’t yet been network/streaming service or premiere details announced for Helen | Believe, but this may be a documentary to keep an eye on.