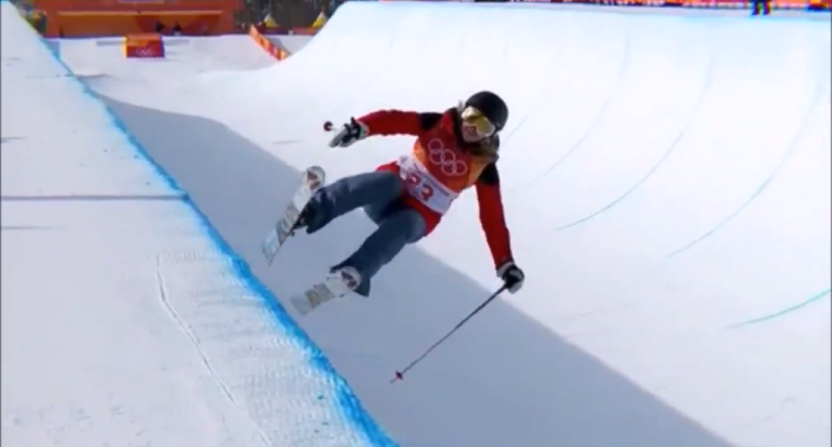 American Elizabeth Swaney competed in the Olympics for Hungary. Her event was the women’s freeski halfpipe. Yet it would not necessarily be accurate to call her a freestyle skier, as that implies a level of, well, competence.

How freeskier Elizabeth Swaney made it to the #WinterOlympics with this very simple halfpipe run: https://t.co/enfDyoQjGC pic.twitter.com/kHTAV7XND4

Swaney finishing up to complete silence followed by the shot of confused locals not celebrating at all is excellent, but the highlights at the end really sell it.

“Swaney here, not having the difficulty or the amplitude here on this run; unfortunately just a little small and not grabbing her tricks.”

There’s a surreal nature to the broadcaster’s completely straight commentary on Swaney’s run. It ends up comedic, and it calls to mind this Geico commercial, currently in heavy Olympic rotation, except for the part where a sumo wrestler on skates is actually quite impressive:

The commentators reluctance to do anything but call the action likely stems from either shock on their part (it’s possible they were in no way prepared for this), or because they didn’t want to touch the somewhat-shady background to Swaney’s Olympic appearance. They do mention her finishes in some World Cup events as Swaney hops down the slope ahead of her run, though never acknowledging why she placed where she placed or contextualizing those results.

Fortunately, Jason Blevins of the Denver Post wrote about Swaney’s journey to Pyeongchang, which saw her (essentially) game the qualification system by virtue of having the apparent time and money to travel the world competing in an event with a relatively thin number of competitors, racking up non-last finishes and claiming Hungarian ties after originally representing Venezuela:

The 33-year-old American with a graduate degree from Harvard University is Hungary’s first Olympic freestyle skier after qualifying through both the country’s quota system and 13 career World Cup halfpipe contests. In those contests, she has finished last or within a couple spots of last place.

Swaney, who said her grandparents came from Hungary, earned her Olympic berth more from attending World Cup events than actually competing. Women’s pipe skiing World Cups rarely see more than 30 competitors, so it’s not hard to meet the Olympic requirement for a top-30 finish. At last December’s World Cup in China, when most of the world’s top skiers were competing in the Grand Prix at Copper Mountain and Dew Tour at Breckenridge, Swaney finished 13 out of 15 competitors, her best career finish.

“The field is not that deep in the women’s pipe and she went to every World Cup, where there were only 24, 25, or 28 women,” said longtime FIS ski halfpipe and slopestyle judge Steele Spence. “She would compete in them consistently over the last couple years and sometimes girls would crash so she would not end up dead last. There are going to be changes to World Cup quotas and qualifying to be eligible for the Olympics. Those things are in the works so technically you need to qualify up through the system.”

Swaney’s attempting to sell her appearance as inspirational:

That part is arguable; it’s been pretty apparent for a while now that one of the best ways to reach the Olympics is by having a lot of money and no sense of shame. Those poor broadcasters forced to call her run as though she was in the medal hunt might be an enduring memory from Pyeongchang.