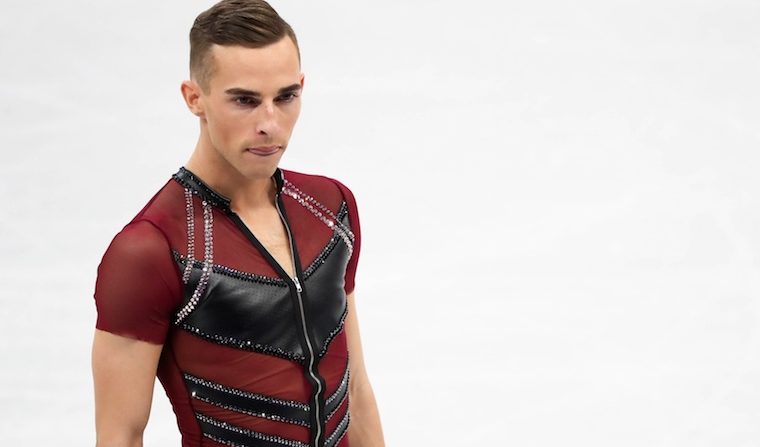 U.S. figure skater Adam Rippon has arguably been the breakout star of the 2018 Winter Olympics, enthralling viewers with his performances (even if hasn’t wowed with athleticism and quadruple jumps like Nathan Chen) and showing his personality in interviews with NBC’s Mike Tirico, Andrea Joyce and Liam McHugh.

His comment about needing a Xanax before taking the ice was easily one of the most memorable of the Olympics early on. Really, no one has topped it (nor should they try).

Rippon is very happy to be in Pyeongchang, in what will likely be his only Olympic games. (He was an alternate for the 2010 Vancouver Olympics and did not make the team for the Sochi Games in 2014.) So he’s not squandering any opportunity to express himself in front of the cameras.

Also, at 28 years old, Rippon is more comfortable with himself and at ease with a microphone than his teenage teammates might be.

Adam Rippon why would you say this to everyone watching around the world? Give me a Xanax and a drink ? What does everyone think about this rant? Rt answers if its ok or not ok. Thank you all for your honesty my peeps. Lil boys & girls looking up to you #representUSA #BeALeader pic.twitter.com/Z2O9YyBpLq

Being so good on camera made it natural to predict that Rippon would eventually be hired by NBC as some kind of correspondent, perhaps for the Today show or an addition to the network’s figure skating coverage. (Maybe red carpet awards coverage or a role on Access Hollywood down the line is a possibility.)

NBC wanted to capitalize on Rippon’s on-air talents sooner than that, however. The network offered the skater a job as a correspondent on its television, digital and social media platforms for the remainder of its Winter Olympics coverage in Pyeongchang.

Adam Rippon saying, “I can’t explain witchcraft” in response to this question about how he’s such a good skater has honestly and truly made me a sports fan. pic.twitter.com/hcihMcwimt

But after initially showing interest in the opportunity (which he found out about via Twitter, not from anyone with NBC), Rippon decided to turn it down, preferring to stay in the Olympic village with his fellow competitors and soak up as much of the experience as he can.

I love being on Team USA and representing our country. My teammates were there for me during my events, and now I NEED to be there for them. I look forward to being with them, and I’m very excited for the rest of the competition. Go Team USA!!!

“I worked so hard to be on this Olympic team, and my teammates and my friends were there for me during my events,” Rippon explained further on NBC Sports Network’s Olympic Ice. “That meant so much to me that I really feel like I need to be there for them during their events as well.”

Adam Rippon and the secrets of his eyebrows pic.twitter.com/Brz3J7i0z3

Rippon showed how much it means to be part of the team and being able to support his friends, notably his Olympic village roommate Mirai Nagasu, who will compete for a singles medal beginning Tuesday night. Obviously, being a part of that just off the ice is meaningful to him and he didn’t want to be deprived of such an experience, nor not be there for his good friend, with whom he commiserated when they both didn’t make the 2014 Olympic team.

But Rippon almost certainly has a future in TV if he wants it, especially if he wants to capitalize on his sudden fame. It’s just a question of NBC or another network finding the right role and showcase for him. We surely haven’t seen the last of him.