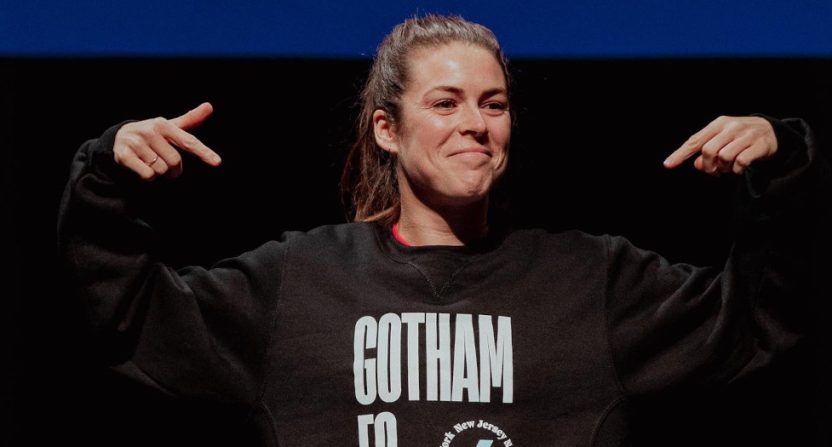 It is a truth universally acknowledged that a free agent in want of a good fortune (or even a modest one) may sometimes strike an arrangement with a team before free agency officially opens, or even announce a move before all the i’s are dotted and t’s crossed. This sometimes leads to tampering charges or other fines, although nowhere near as often as you might think considering the amount of deals announced one minute after a free agency period opens. (Inconsistent enforcement of supposed prohibitions? That never happens!)

We see more actual fines for odd things around tampering, like players turned guest analysts or executives turned radio guests or auto-tweeting executives praising players under contract elsewhere. And the latest odd one is the NWSL‘s NY/NJ Gotham FC getting fined for the particular way they “announced” their signing of Kelley O’Hara. That actually happened on the day free agency opened (for the first time in NWSL history), and it was actually more her announcement, and it took place on stage at a Men In Blazers event earlier this month. Here’s the full language of their release:

The National Women’s Soccer League announced today it has issued NJ/NY Gotham FC a fine for announcing the signing of a player prior to the full execution of the player’s agreement, violating section 3.3.1.1 of the League Communications Manual, and for ignoring a league directive regarding the announcement.

Here’s how Jonathan Tannenwald of The Philadelphia Inquirer discussed this on Twitter:

Perhaps Budweiser can chip in to help with the fine.https://t.co/lC1keTqw5s

And here’s how Gotham FC initially tweeted it:

Tannenwald had a later clarification on what the fine is for:

As I understand it:

There was, and is, nothing to stop a free agent Kelley O’Hara from going up on stage and putting on a Gotham shirt and saying she’s signing for Gotham.

What drew the fine was the club’s portrayal of the deal as fully done, when it was not fully done.

Leagues are obviously entitled to draw up whatever standards they like and then enforce them. And there is some merit to insisting that deals are fully done before anyone announces them; the cases where a player has flipped from one team to another in leagues like the NBA and CFL have not been great. And perhaps there was a way for Gotham FC to get this deal properly done before the Men In Blazers show, in which case there wouldn’t have been an issue here. But if there wasn’t, it still seems worth a fine to have O’Hara announce that move on stage at a high-profile soccer event like this.