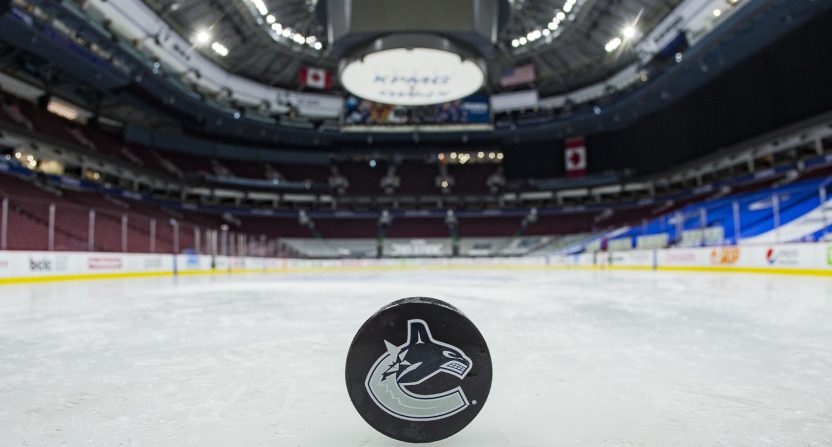 One of the most widespread COVID-19 outbreaks amongst a professional sports team so far comes from what’s currently going on with the NHL’s Vancouver Canucks. Last Wednesday, the Canucks saw their scheduled home game against the Calgary Flames postponed 90 minutes before puck drop following news that the team had had two players and one coach added to the league’s COVID-19 protocol list, with one of those player additions coming after the list’s initial release earlier that evening. Since then, things have gotten worse, with the team initially put on pause through Tuesday, April 6 and targeting Thursday, April 8 for their return to game play, and with their levels of personnel on the list (which includes both confirmed positive tests and people designated as close contacts) set as 17 players and three coaches by Monday night. Here’s more on that from Ben Kuzma of The Province (a Vancouver-based newspaper):

With rookie Nils Hoglander added to the number of those compromised by COVID-19 — and amid the presence of the aggressive Brazilian P.1 variant — 17 players on the active roster and three coaches are now afflicted.

That piece from Kuzma also includes comments from Dr. Brian Conway, president and chief medical officer of the Vancouver Infectious Diseases Centre, who wonders if the team should play again this season (especially after discussion that at least one case on the team is the P.1 variant, first discovered in Brazil):

“Because the variant is around and we’ve been informed of at least one case on the Canucks, and probably more are due to the variant, then in assuming that and knowing it’s three times as contagious, if I were a player on another team I would think twice about playing.”

“I would want significant assurances, as much as the science can give us, that I’m not at risk. And at that point, you’re thinking long-term. My sense is until we can really be certain that none of the Canucks is at risk of transmission of the variant, then it will be difficult to justify having them play any games.”

“With the variants out there, it’s not terribly safe. I wouldn’t be surprised if we see more cases on more teams. I sincerely hope not, but this is what happens when you have this contagious variant around.”

It’s not terribly easy to say that the Canucks’ season should just end, though. Yes, they’ve now had six postponed games, and yes, at 16-18-3, they’re not likely to make the playoffs. This season’s format sees the top four teams in each division make the playoffs; the Canucks are currently fifth out of seven North Division teams, but they’re six points back of the fourth-place Montreal Canadiens, and have three fewer games played. So they likely don’t have a postseason run ahead.

But there is a significant need for the Canucks to make up all 56 scheduled games this year, even if that doesn’t have postseason implications for them. That’s quite important for their own local TV and radio contracts (both with Rogers Sportsnet), and for the wider league local TV and radio contracts. And it matters for the teams that were scheduled to play them, too. Yes, the NHL could at some point decree that the Canucks don’t need to play a full 56 games (and they might get there if these virus issues with the team continue), but that’s not an easy call to make. And there’s a lot that would be impacted by that.

The most important thing here is the health of the Vancouver players and coaching staff, though. And there have already been a bunch of reports of some of their players facing tough symptoms from this virus. Hopefully they’ll be okay, and hopefully they’ll be able to make up their full schedule of games, and hopefully that won’t lead to the NHL having to push the playoffs even later still. But none of that is certain at this point.

[The Province; photo from the March 31 postponed game from Bob Frid/USA Today Sports]