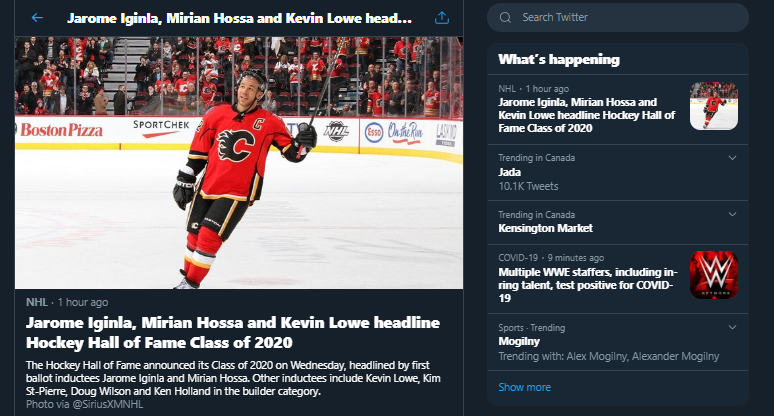 We’ve seen Twitter get sports-related trends wrong before, from suggesting CBS’ Criminal Minds to those who follow ESPN broadcaster Rachel Nichols (who is not the actress Rachel Nichols who’s appeared on the show) to ignoring the female basketball players who had signed with PUMA. And they committed a particularly funny error there Wednesday, covering the Hockey Hall of Fame’s 2020 class, but saying “Mirian” Hossa was involved (not the actual player selected, Marián Hossa).

A screencapped he Twitter moment in question can be seen above, and it was still wrong more than an hour after the announcement. It was eventually fixed in the second hour, and is correct now. But it’s interesting too that it doesn’t appear to have been drawn from an incorrect tweet (searching “Mirian” in that moment only produced results from Twitter’s moment text, not from any included tweets). And this did produce some funny mockery:

Who TF is Mirian Hossa? *mutters in Slovak* pic.twitter.com/5pzkssABTx

In case you're wondering whether new Hall-of-Famer Marian Hossa is somehow still underrated, I'll submit that "Mirian Hossa" is now trending on Twitter.

Congratulations, Marian. You're one of the greatest!

Typos happen, but it is pretty unfortunate to see this misspelling for Hossa on such a great day for him. Hossa, who played in the NHL from 1997 through 2017 with the Ottawa Senators, Atlanta Thrashers, Pittsburgh Penguins, Detroit Red Wings, and Chicago Blackhawks, and who won three Stanley Cups (all with the Blackhawks), notched 525 goals and 609 assists in 1,309 NHL regular-season games (plus 52 goals and 97 assists in 205 NHL playoff games). And it’s rough that whoever came up with this Twitter moment didn’t know how to spell his name (and didn’t bother to Google it).

And Twitter didn’t even mix Marián up with his brother Marcel, or with anyone else. “Mirian” appears to have come out of thin air. But hey, being elected to the Hockey Hall of Fame is solid enough that it probably doesn’t matter that someone in the Twitter offices got your name wrong.