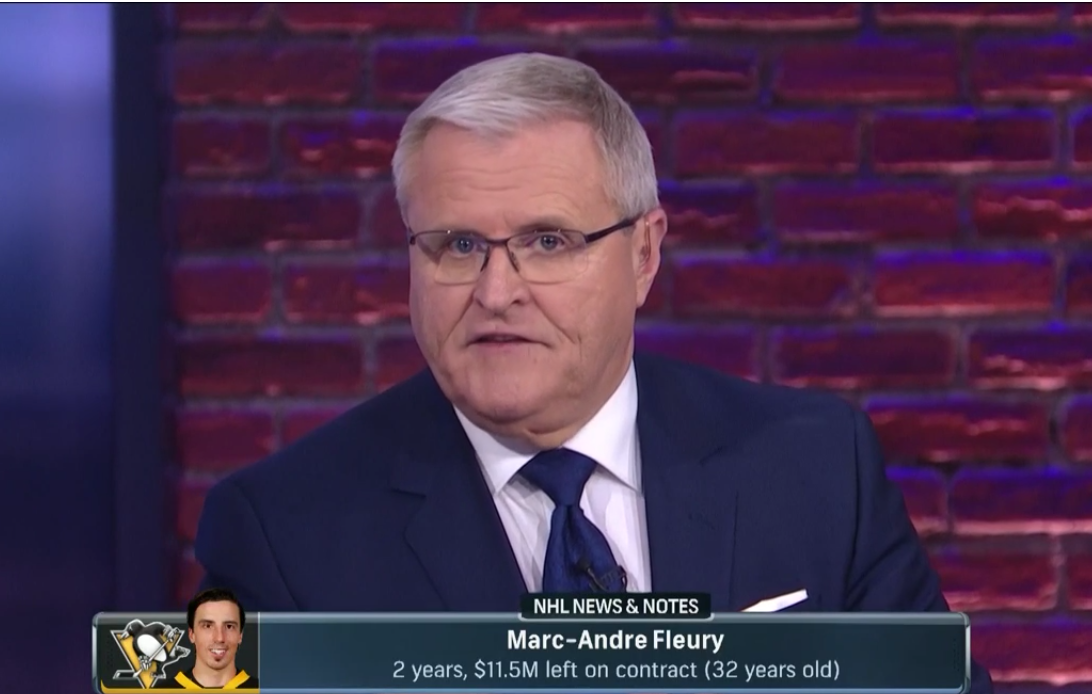 A challenging aspect of our modern media world is how the same person is often expected to both report and offer informed opinions. That leads to a lot of controversies around others citing those opinions as reporting and/or pushing back against those opinions, as we saw with Cecil Hurt on Heather Dinich and Trent Dilfer on (colleague!) Adam Schefter, and the latest example comes from Canada’s The Score. The website (it used to be a TV station, but it’s just a website following the digital side’s 2012 acquisition by Rogers) ran a piece by Cory Wilkins Friday headlined “Report: Penguins will buy out Fleury if not traded.” (It’s since been deleted, but you can find the cached version here.)

The problem? The source in question insists that it wasn’t a report. This came from what TSN/NBC reporter/columnist/insider Bob McKenzie said in a segment on NBC Wednesday . Here’s what McKenzie tweeted at The Score’s main account Friday before the story was pulled:

@theScore This is really disingenuous aggregating by you guys. I didn't "report" anything, I had a conversation about PIT options. On Wed.

@theScore to come out two days later framing it as a "report* or a "news" item, as you did is, quite honestly, bullshit. Be better.

@theScore FTR, discussion was whether Fleury would or wouldn't be traded and I merely said whatever happens, expansion draft not a concern.

@theScore That the worst-case scenario, IF MAF wasn't traded and IF he didn't waive NMC, he could be bought out or PIT could make a deal…

@theScore …with Vegas to NOT take MAF in exp draft. So, many "ifs" and a discussion, not a report. Can't believe I have to clarify this.

Was The Score’s framing unfair? Well, here’s the segment in question:

In defense of Wilkins and The Score, McKenzie doesn’t really make it all that clear in the segment that this is his opinion rather than reporting (or that some of it’s reporting and some of it’s opinion). This starts with host Liam McHugh asking McKenzie “What are you hearing?” with regards to Fleury. Now, McKenzie’s response seems a little more opinion-based at first, as he starts with “I think if it makes sense for the Pittsburgh Penguins to trade Marc-Andre Fleury, I think they’re wide open to that possibility,” but then he goes on to dismiss how people are tying the need for a Fleury trade to the upcoming Las Vegas expansion draft (where the Penguins would have to protect Fleury if he’s still on their roster), and to do so in pretty definitive terms.

“Here’s the thing; if Marc-Andre Fleury wouldn’t waive his no-move clause in the event he’s not traded by the expansion draft, then they would simply buy him out. Now, they would not want to do that, because that brings a cap punishment hit down the road, but that’s certainly a solution. Or they could go to [general manager] George McPhee in Las Vegas, say, ‘Here’s a draft pick, lay off Fleury if you don’t mind.’ But what they really want to do is assess ‘Can we get cap space to do something else that makes sense? Or we’re also giving up our insurance policy, with Murray and Fleury.’ The most important thing is to win a Stanley Cup, and if it makes sense to do it, they’ll do it. If it doesn’t, then they won’t, and they’ll worry about the expansion draft stuff later.”

And here’s how Wilkins framed that:

The Pittsburgh Penguins are willing to pay up.

If the Penguins are unable to deal goaltender Marc-Andre Fleury prior to the summer expansion draft, the team will turn to a buyout, Bob McKenzie told NBC Sports.

McKenzie’s right that there are plenty of ifs and coulds in there, but “they would simply buy him out” sure sounds like a definitive statement given the preceding conditions (even if he backs off a bit later with the comments about another option being trading a draft pick and keeping Fleury), and Wilkins’ piece feels like an accurate summary of the preceding conditions. Yes, perhaps Wilkins should have discussed the draft pick alternative McKenzie listed as well, and perhaps his headline should have been more along the lines of “McKenzie: Penguins not desperate to move Fleury before draft” (which nicely sidesteps the question of if that’s a report or analysis as well), but this doesn’t necessarily seem like something worth getting this mad about. Let’s examine another write-up, from NBC’s own James O’Brien, headlined “McKenzie’s trade talk: Penguins shop Fleury, Coyotes have pieces to sell”:

McKenzie reports that the Penguins are “wide open” to the idea of moving “MAF,” though maybe not as desperate as some might think. Why? He believes that the Penguins won’t get into a situation where they’d lose Murray, even if it means buying out Fleury.

…Final point on that: McKenzie emphasizes that the Penguins’ top focus is a run at the Stanley Cup; if that means keeping Fleury and then figuring something out this summer, then so be it.

Interestingly, this also includes the “reports” McKenzie objected to when it was The Score doing it, but he doesn’t appear to have taken NBC to task for it. Of course, O’Brien then calls it only that McKenzie “believes” when it gets to the part about buying out Fleury, but then the “emphasizes that the Penguins’ top focus is” again appears to take this back into the realm of reporting. That fits with McKenzie’s actual comments too; “The most important thing is to win a Stanley Cup, and if it makes sense to do it, they’ll do it. If it doesn’t, then they won’t, and they’ll worry about the expansion draft stuff later.” That’s not “I think” or “I believe” or even “My understanding of the Penguins’ thinking is”; it’s a declarative statement about the team focusing on this year and figuring out the draft later, whether that’s a buyout or a deal.

Perhaps Wilkins was wrong to write “will turn to a buyout,” but it doesn’t really feel like much of a stretch from “they would simply buy him out.” The more accurate phrasing might be to do what O’Brien did and emphasize McKenzie’s focus on the Penguins not worrying about this until after this year if they can’t trade Fleury (and then taking one of the two options he presents, not just the buyout), but it doesn’t seem clear why McKenzie’s so upset about The Score attributing “Report” to him (or why he’s so upset about them doing so just over a day later). Perhaps he got pushback over their writeup of his comments (which if so, fair enough, but serious pushback should consider the actual comments, not just any writeup of them), or maybe he sees a greater distinction between what he reports and what he offers as his own thoughts. Either way, it might help viewers if he more clearly stated those delineations on the air.

It’s worth noting that this isn’t the only recent time someone’s come away with a very different impression of what McKenzie said than what McKenzie himself believes he said in retrospect. Here’s an exchange from Friday night about Leafs’ forward James van Riemsdyk:

@draglikepull I mean yes and no, he says it in a way that's closer to "can't see it" then it is "already decided"

@JeffVeillette @draglikepull Correct, it's opinion based on age, expected salary, expected term and young stars coming out of entry level.

@draglikepull @JeffVeillette If I was saying that, not sure I would choose The Quiz as the vehicle to report something, TBH.

Maybe there’s a point there, and maybe viewers should expect that a lot of what McKenzie is saying in these on-air Q+A sessions to be opinion rather than firm reporting, but it would certainly lead to less misunderstandings if that was firmly stated. Of course, part of the problem here comes from McKenzie’s dual role; he’s expected to be both a reporter and an analyst, and he’s quite good at both jobs, but it’s not always easy for viewers to understand what hat he’s wearing at a particular moment (unlike those who are more clearly in one role or the other).

That’s not all on McKenzie, either, as his hosts could help with this. If the goal is to report something firmly, set McKenzie up for that with a “Bob, I hear you have some information on this” or something, but if the goal’s analysis, ask “What do you think will happen?” Producers could help, too, maybe by making it more explicitly clear if a particular McKenzie segment will be one or the other. (McKenzie’s last tweet above seems to indicate TSN’s The Quiz won’t include separate reporting; it might be useful for the network to emphasize that it’s analysis.)

Of course, McKenzie could delineate the two himself, even within the same piece. If his goal in the Fleury situation was to report that the Penguins were not desperate to trade him before the expansion draft and then only offer opinions on what they might do next (which is how O’Brien relayed it), he could much more clearly set the latter part off with “they might buy him out, or they might make a deal,” rather than “they would simply buy him out.” And none of this is to suggest that McKenzie’s reporting and analysis aren’t both valuable, as they obviously are. If he doesn’t want people aggregating his comments with “Report,” though, it might be helpful for him to make it clearer what he’s reporting and what his opinion is. He may have got The Score to pull this piece, but it’s not hard to see this happening again.