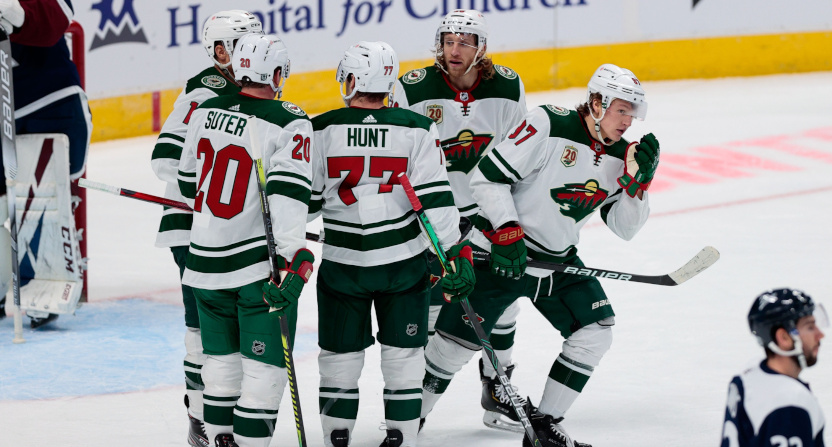 The recent NHL schedule has been highly in flux following COVID-19 protocol postponements for the Vegas Golden Knights, Colorado Avalanche, New Jersey Devils, Minnesota Wild (seen above Feb. 2 against the Avalanche), and Buffalo Sabres. And that’s continuing this week. While the Golden Knights returned to play last week and the Avalanche are set to return Sunday (against the Golden Knights), the league announced Monday that the postponements for the other three teams will be extended through Tuesday, Jan. 16, affecting two Sabres’ games, three Devils’ games, and two Wild games:

The Sabres’ games against the Washington Capitals, scheduled for Feb. 11 and Feb. 13, were postponed because of COVID-19 issues with Buffalo, which previously had four games postponed through Feb. 8.

Devils games against the Philadelphia Flyers (Feb. 11 and Feb. 13) and Boston Bruins (Feb. 15) were postponed because of COVID-19 issues with New Jersey, which previously had three games postponed through Feb. 6.

That announcement also includes that “A decision on when the three teams can resume practice and game play will be made by the medical groups of the NHL, NHL Players’ Association and each team in the coming days.” As for how this is affecting individual teams, Michael Russo of The Athletic has a good look at comments from Wild GM Bill Guerin Monday:

“It’s just highly contagious,” Guerin said. “I think once it gets out there, it’s out there and kind of luck of the draw if you’re gonna get it or not. We’ve been following every protocol to a T. Players, staff alike have been doing a great job of trying to be responsible. It’s just one of those things. During the course of a game, too, it could have been passed along. I really don’t think there was much that we could have done outside of maybe we could have stayed in Colorado and just stayed in our hotel rooms.

“But other than that, not really. The cases are coming bit by bit. We’re getting a couple here, couple there. Maybe we’ll get a couple more tomorrow. We just have to be patient and ride it out. I think the most important thing is that people get to the other side of this healthy and we’ll resume playing hockey when it’s safe to do so.”

…“I know there are teams out there that kind of went through the same thing that started doing smaller groups right when they could. Then there are other teams that waited and went right back into full practice. Not sure what we’re going to be able to do and when we’re going to be able to do it. Nothing is open right now. We are still shut down. But it’s something that we’ll be talking about here in the next few days.”

As Russo wrote earlier Monday, the NHL is currently reevaluating its protocols (including types of testing, how testing is conducted, players’ arrival before games and more) based on some of these outbreaks. And there are some particular concerns with hockey games relative to other sports given the cold temperatures at rinks and the challenges with ventilation, which has produced some studies (including a CDC one published in October based on a rec hockey game in June) that suggest there’s the potential for in-game transmission. There are also long-term concerns for many, including Wild draft pick Marco Rossi, out for at least this season thanks to COVID-19 complications.

So there’s definitely some logic to shutting these teams down for a while to try and contain these outbreaks. But these postponements will pose some challenges with the schedule going forward. We’ll see where things go for the NHL from here.