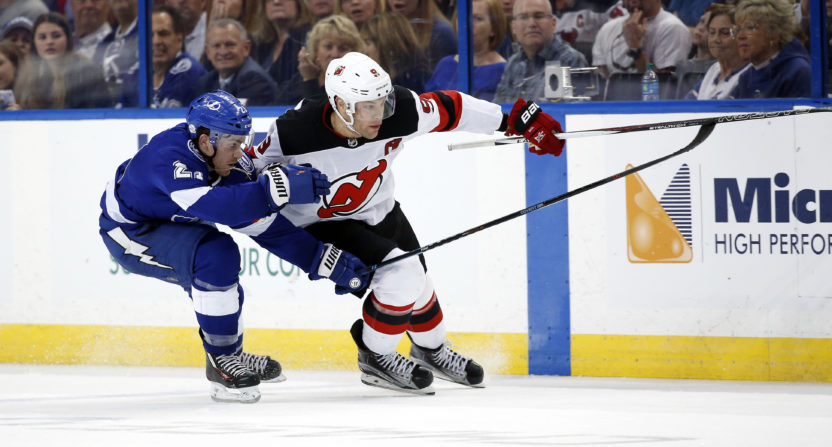 The NHL announced the broadcast schedule for the opening round of the Stanley Cup Playoffs Sunday night, offering us a look at how NBCUniversal will shuffle the various series across its numerous networks. As usual, many games will air on NBCSN, others will appear on CNBC, others on USA, a handful on NBC and one on NHL Network.

But in a move we haven’t seen before, there will also be at least two games on… Golf Channel. NBCU has shunted the respective fourth games of the Devils-Lightning and Ducks-Sharks series (both Wednesday, April 18) to a network that has never aired hockey and has another sport right there in its name.

Here’s what the arrangement looks like on NHL.com, where they don’t even have a logo for Golf Channel:

In comparing this year’s broadcast schedule to last year’s, it seems that every channel (besides Golf) will air the same number of games over the first 10 days of playoffs, but NBC and CNBC will simulcast a pair of games Saturday, which clears room for Golf Channel to carry a couple contests.

To be clear: NBCU did not have to toss these games on Golf Channel. As TSN’s Travis Yost points out, the content on other peacock networks Wednesday night is not exactly must-see television. Presumably, NBCU could have bumped Shark Tank re-runs (fun as those are) off CNBC in favor of playoff hockey if it had wanted to.

So the GOLF Channel (?!) gets back-to-back NHL game fours. Here’s what’s airing in those blocks on other channels:

NBC sending a message, I suspect..

Update: A reader points out that Yost’s tweet is slightly misleading, given that CNBC will air a new episode of Staten Island Hustle at 10 p.m. and USA will broadcast a new episode of Suits at 9 p.m. This doesn’t change the broader point that NBCU could have found room for the hockey games on these channels had it really wanted to. And those channels have significantly wider distribution, estimated as 91 million homes for USA and 87 million for CNBC to 71 million for GOLF in April.

Here’s a statement from NBC on the decision:

Official comment from NBC: "We have and continue to receive great cooperation from CNBC and USA Network…Because of programming conflicts on Wednesday night, April 18, for the first time we will extend coverage to Golf Channel." https://t.co/9fBKU8gopB

Though we don’t know for sure what NBCU is thinking with this decision, it’s possible the company is looking to pump up Golf Channel’s distribution, as hockey fans call their carriers to ask about the network. Maybe there are broader plans to expand Golf Channel’s purview or even turn it into a general-interest sports network like NBCSN. For now, it’s tough to say.

Whatever NBCU is thinking, it seems destined to anger some hockey fans, who eternally feel their sport doesn’t get proper respect and certainly won’t be happy to watch the most important games of the year to date on a network that specializes in drives and putts, not slapshots.

Already, the Devils blog Pucks and Pitchforks has published a post headlined, “New Jersey Devils Still Get No Respect, Playoff Game on Golf Channel.” You can expect a lot more of that once Devils, Lightning, Ducks and Sharks fans figure out over the next week where they’ll be watching their teams’ Game 4s.