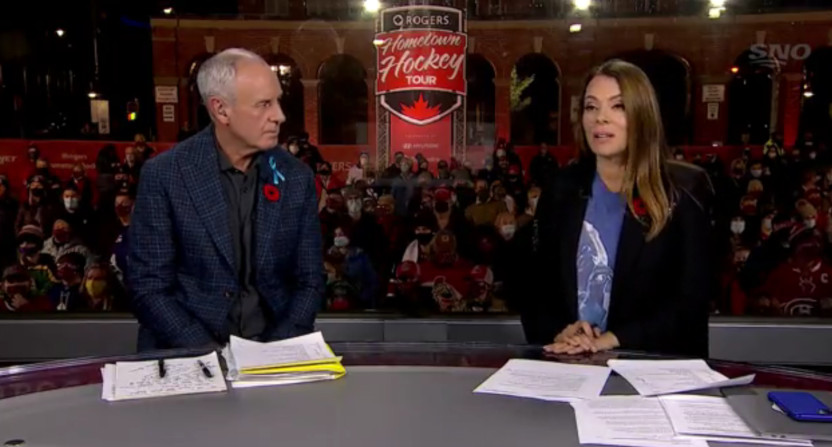 An ongoing issue in sports media is just how much critical reporting or critical commentary can air on an outlet that pays a team or league to broadcast its games. To be clear, the issue is not that rightsholder broadcasts never offer team or league criticism; most rightsholder broadcasts offer at least some level of criticism when merited, and they sometimes feature critical reporting as well. But there have been plenty of cases where rightsholders have taken criticism for being slow to negative league stories, and even some where people have alleged that league pressure led to specific broadcaster decisions (such as ESPN ultimately not airing PBS NFL concussion doc League of Denial, a claim ESPN disputes, or to NBC removing Bob Costas from their Super Bowl coverage after his comments on concussions).

And it’s certainly rare to see some of the harshest commentary on a league come on a network that pays that league for national rights. But that’s what happened with Sportsnet and their Rogers Hometown Hockey Monday night broadcast this week, where co-host Tara Slone (seen at right above, with co-host Ron MacLean) took on the NHL’s culture in the wake of the Blackhawks’ sexual abuse scandal and cover-up and the NHL’s response to that.

I’m grateful to have the support of everyone at @hometownhockey_ who encouraged me say what was in my heart last night.

Some thoughts on the NHL’s broken culture. pic.twitter.com/DkhJ7S2jOL

“It’s been a really tough week to be a hockey fan. That’s why I got into this business. And I know I’m speaking to a lot of like-minded people out there who have had a really hard time kind of coming to grips with this, and reckoning their fandom with what seems to be happening in the National Hockey League. I’m conflicted. And today, specifically during Gary Bettman’s availability, he talked about the progress that’s been made over the last 10 years.”

“And the reason that I feel so passionate about this, and so many of you do out there, is because this matters to us as humans. We love this game, and we just want it to be better. And it isn’t. And anybody who thinks that this culture is not deeply broken is wrong.”

Again, even on this particular issue, there have been notable comments about this on networks with rights before. TSN (a regional rightsholder at this point, but still a rightsholder) led the way on the reporting around this scandal, with TSN reporter Rick Westhead (along with Katie Strang of The Athletic) crucial to getting this to an actual investigation, to a publicly-released investigation, and beyond the initial denials from the Blackhawks and the league (which, Bettman confirmed Monday, based their denials on what they were told by the Blackhawks, and didn’t look further until pressure intensified). TSN also aired the aforementioned “heartwrenching” interview between Beach and Westhead last week. ESPN has covered this scandal on air and online, and Turner has addressed it on their studio show as well. And many of those comments have included criticism of the league.

But Slone’s commentary felt particularly incisive, and particularly unusual for something airing on a rightsholder. It went beyond this specific incident to the NHL’s many other recent failures (in reference to her discussion of addressing racism, it’s notable that the NHL’s long list of promises there didn’t even lead to an interview with Akim Aliu). It looked at the wider issues with the NHL’s current culture. And it even specifically referenced Bettman, who’s been under fire for how little he delivered and committed to in that media availability Monday, and it called for systemic change to fix a “broken culture.” It’s certainly not the norm for what you see during a rightsholder game broadcast.

It’s also notable that this aired on a company that was long the NHL’s actual primary rightsholder, at least in terms of media fees. Rogers currently pays the NHL an average of $475 million Canadian a year over 12 years from a 2013 deal for national Canadian TV and streaming rights (the actual number is slightly higher now, as that deal was backloaded). That’s currently around $380 million U.S. a year. While that’s slightly below the estimated around $400 million U.S. annually ESPN is paying under the new deal that kicked in this year for their portion of U.S. TV, streaming, and highlights rights (by contrast, Turner pays around $225 million U.S. annually for their portion of U.S. TV and streaming rights), it’s a lot higher than the $190 million U.S. NBC was paying on average. It’s unclear if the Canadian rights will wind up worth more than the U.S. ones again once the current Rogers contract expires after the 2025-26 season, but the Canadian rights were the bigger part of the picture for the NHL for a long time. So this is not criticism that aired on a minor international partner.

And it’s also worth keeping in mind that this is not just one critic of the league speaking out. Much of what Slone says here in criticism of the NHL’s response to the Blackhawks’ saga and the other issues they’ve dealt with has also been said by many others, whether they’re journalists covering the league or people who were or are fans of the league and its teams. And that was really clear in the response to Bettman’s press conference Monday; the anger at the league and its repeated failures to handle critical issues is boiling over for many. But Slone’s comments Monday night, on a national Canadian game broadcast, are some of the strongest so far. And they illustrate that the criticism for the league here is not going away.