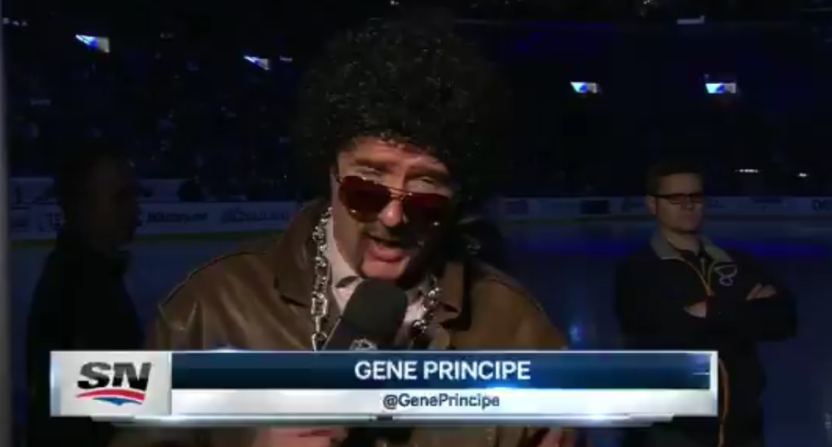 There are often plenty of puns relating athletes to other celebrities in sports tabloid headlines, SportsCenter highlights and so on, but Sportsnet’s Gene Principe took it to a whole new level as the rinkside reporter on the network’s broadcast of the Edmonton Oilers – St. Louis Blues game Tuesday night.

To talk about Oilers’ forward Drake Caggiula in a segment before the game, Principe put on a wig, sunglasses, and a leather jacket and started singing Drake songs and relating them to Caggiula:

“And you know what, the enemies are, hold on, we’re going home, St. Louis is coming home. And St. Louis is coming home feeling very good about where they are in the National Hockey League standings. Win tonight and they’ve got a chance to be first. Hold on, they’re calling me on my cell phone. They’re saying I’m out of time, that can only mean one thing. It’s time for Drew Remenda and Kevin Quinn.”

The “Thankfully,” from Quinn is quite funny, as are the expressions from both, to say nothing of the folded arms from the St. Louis official in the background at the start.

Sportsnet’s Twitter account referred to Principe as “ChampagnePrince,” so maybe this is going to become a recurring thing. It certainly didn’t go over well with many viewers, though:

I will never be able to unsee that…?

Wtf did I just watch? Holy smokes that was cringe worthy

If this is what I miss when you dummies blackout games, I guess I am lucky.

To his credit, Principe engaged with the criticism pretty well:

Are you Dunn with me? Hate the announcer but not the team. They have nothing to do with it. https://t.co/VqFgL5GaOV

No problem..I expect after that opening for people to 'Drake' me over the coals. Enjoy the game. https://t.co/1iypGiBgsC

But yeah, this was always a move that was going to get a lot of criticism. It definitely got people’s attention, though. But it didn’t exactly inspire the Oilers; they lost 8-3. At least we can be grateful that Principe went with a Drake riff rather than a Caligula one, though.