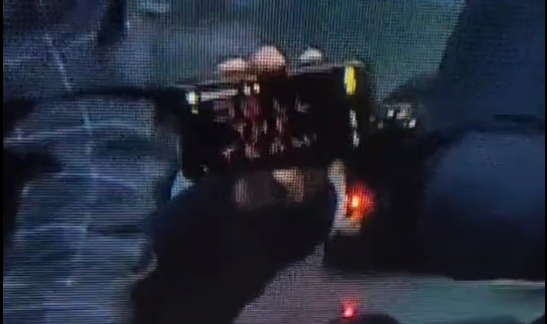 There’s quite a history of “Sell the team” signs, chants, comments, and petitions around professional sports franchises. One of the latest prominent ones has come around the NHL’s Vancouver Canucks, who are 14-15-3 this season (and 12th in the Western Conference, outside of the playoff picture) even after a 6-5 shootout win over the Seattle Kraken Thursday. And that even managed to make it to the team’s Sportsnet broadcast, with a fan photobombing the post-game panel with a “Sell the team” message (presumably intended for owner Francesco Aquilini) written on a phone:

The Canucks had been on a particularly rough stretch heading into Thursday’s game. They suffered back-to-back 5-1 home losses Saturday and Monday against the Winnipeg Jets and St. Louis Blues respectively. And Monday’s game saw audible “Sell the team” chants picked up on the broadcast:

Meanwhile, several Canucks’ games this season (including Saturday’s 5-1 loss to the Jets) have seen jerseys thrown on the ice in protest:

Another #Canucks jersey thrown onto the ice this season. Quickly picked up by the linesman. pic.twitter.com/mcplDI1Q1j

Some previous examples of that:

Good guy Brian Dumoulin returns a Canucks jersey that was thrown onto the ice by a fan ?? pic.twitter.com/gquw761kov

Apparently 4 #Canucks  jerseys were thrown on the ice tonight.
It’s their money but I never understood that.
Maybe they brought an old Ron Sedlbauer jersey in a bag just in case.
There were a few thrown by #Oilers fans too over the years at Rogers Place. pic.twitter.com/osnNw9Zggo

Many of the protests here from Canucks’ fans are about more than just the team’s poor play this year. Since their run to the Stanley Cup Finals in 2010-11, they’ve only made the playoffs four times in 11 seasons, with their best showing in that time (and their most recent playoff appearance) being a win in through qualifying and a run to the second round in the pandemic-altered 2019-20 season. They went 23-29-4 in 2020-21 and 40-30-12 last season, missing the playoffs both years.

Aquilini first acquired a 50 percent share in the Canucks in 2004, then bought the remainder of the team in 2006. They found some initial success under his tenure, making the playoffs six times in the first seven years of his full ownership (including that 2011 run), but the on-ice results have been weaker since then.

Vancouver did come out with that eventual 6-5 shootout win over the Kraken (now 18-10-4) Thursday thanks to a superb five-point game from Elias Pettersson. Funnily enough, he’s one of the  two players in the Canucks’ organization with that name. The 2022-drafted defenseman is still playing in Sweden, though, so in this case, we mean the 2017-drafted forward. He hadn’t skated in the last six days thanks to illness, but was huge to Vancouver’s win Thursday. And that came despite his own head coach, Bruce Boudreau, saying he wasn’t even sure Petterson would be able to play:

Bruce Boudreau was pessimistic when asked yesterday about Elias Pettersson playing tonight after being sick 6 days: "He's a good player but he's not Superman."
Pettersson: "Hold my beer."
1 goal and 3 assists … so far.

Even Pettersson’s strong showing and the Canucks’ eventual shootout win wasn’t enough to dissuade this fan from the “sell the team” post-game photobomb, though.