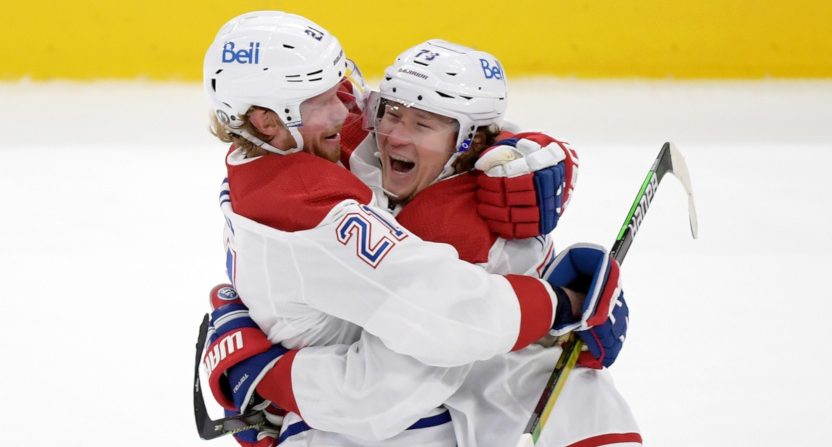 When a network’s personalities unanimously pick one side, they’re going to take a lot of criticism if the other side pulls off the win. That’s especially true when you have 23 people involved. And that’s what happened with Canada’s Rogers Sportsnet, where their 23 polled NHL personalities all picked the Toronto Maple Leafs to beat the Montreal Canadiens in the first round.

In truth, the Canadiens would come back from a 3-1 series deficit with a 3-1 win in Game 7 Monday night, making these picks look rather silly in retrospect. The predictions are still available on the web here, and can be seen below  in a tweet from Jonathan Brazeau (which cuts off Elliotte Friedman’s name at the top and Kyle Bukauskas’ name at the bottom in the embed; the full tweet can be seen here):

Ouch. Well, at least no one picked Leafs in 4 ?‍♂️ pic.twitter.com/tCrJhPTmIU

As Jason Kirk wrote for Moon Crew last October, every panel should know better by now and have someone just pick against the grain if it’s going to be unanimous. Unanimous-1 is far less of a story, and only really notable if the panel is huge (like the 42 of 43 ESPN analysts who wrongly picked Alabama over Ohio State in 2015). But a unanimous panel getting it wrong is hilarious, especially when it’s a panel of this size. And, interestingly enough, this panel was unanimous for two other first round series, Colorado-St. Louis and Carolina-Nashville; they were right in both those cases, though. And it should be noted that at least all these pundits predicted the series would go at least five games, unlike TSN’s Craig Button:

Craig Button can never delete this though pic.twitter.com/ldpODMSpLD

It’s somewhat understandable why everyone thought the Leafs were going to win this series. They went 35-14-7 on the season (77 points) and won the North Division, while the Canadiens went 24-21-11 (56 points) and earned the division’s last playoff berth. But upsets do happen in hockey, even over a seven-game series. So a voice of dissent would have been reasonable here. And it would have led to a little less laughing at Sportsnet right about now.