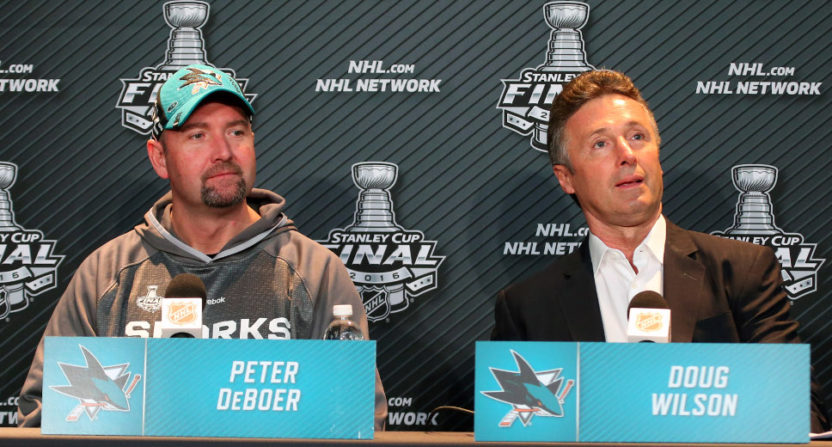 This week saw an unusual recreation of the Sharks-Jets rivalry (with much less snapping) thanks to San Jose Sharks players complaining about Winnipeg’s weather in a segment aired on NBC Sports California, and responses from the Canadian Broadcasting Corporation, the CEO of Economic Development Winnipeg, and Jets’ coach Paul Maurice.

But an interesting side product of that is Sharks general manager Doug Wilson (seen above (R) during the 2016 Stanley Cup Final) getting upset with NBC Sports Bay Area, the team’s rightsholder. Curtis Pashelka of The San Jose Mercury News wrote a piece Tuesday that included Wilson commenting on the situation and blaming the network:

“It’s disappointing that our broadcast partner would put our players in that position. First of all, by even asking that question, then putting it on our broadcast,” Sharks general manager Doug Wilson told this newspaper on Tuesday. “That was a question that was one of 30 that were asked earlier in the year. To me, it was an inappropriate question that should not have been asked. Whether it was an attempt at humor, it was not appropriate.”

“I went to high school in Winnipeg, I played junior hockey in Winnipeg,” Wilson said. “It’s a great city and (the Jets are) a wonderful organization and I’m disappointed that our broadcast partner would put our players or our organization in a position to have to respond to this.”

Asked, though, if the players do have to bear responsibility for what they say to the media, even if it is to a friendlier outlet, Wilson said, “Sure, we all do. But I think the narrative was cobbled together out of what was probably an attempt by our broadcast partner at some humor or whatever. But inappropriate and unacceptable.”

Asked also if he has spoken to anyone at the network, Wilson said, “It’s being dealt with, yes.”

That’s quite a notable commentary from a general manager about the network that broadcasts their games. It’s understandable why Wilson is upset here, given that the network’s decision to ask Sharks players a question about the worst city to visit (during preseason camp) and decision to air that clip later created a controversy the San Jose organization probably would have rather avoided.

But, at the same time, that’s hardly an unreasonable question for a media organization covering the team to ask at preseason camp. And that brings up the issues of rightsholder coverage versus non-rightsholder coverage. It also brings up questions about Wilson getting heated about players’ comments on a city he knows well thanks to personal experience. Would he be as mad if the players had said the same things about Edmonton?

And would Wilson be so upset if Pashelka had asked that question and the players’ responses had run in the Mercury-News instead of airing on NBC Sports Bay Area? Probably not. And so, while this wound up creating a dumb controversy, there’s maybe an argument for NBC Sports California’s actions here. Yeah, the way they did this may not have been the smartest, but “What’s your least favorite city to visit?” isn’t exactly a ridiculous question.

And it’s somewhat unfortunate that they’re being blamed for airing what players told them. This shouldn’t really be a controversy in any case (it’s totally understandable why some Sharks players might not love visiting Winnipeg, especially in the winter, and this only blew up because of the “Please like my city!” reaction from Winnipeg), but it really shouldn’t be blamed on the network. And Wilson’s actions here are problematic, and suggest that the Sharks are trying to control their rightsholder’s coverage.