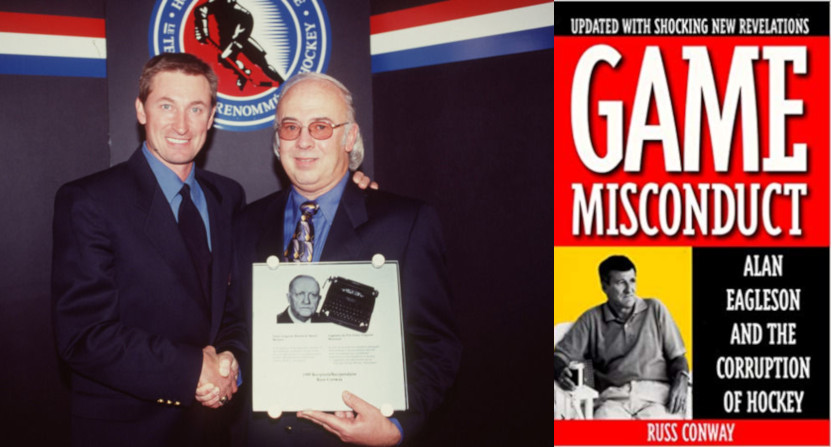 For those who have followed hockey history, the name Russ Conway rings a huge bell. Conway, who passed away this week at 70, joined The (Lawrence, MA) Eagle-Tribune in 1967 at 18 as a co-op student from Northeastern University, and he went on to a decades-long career there as a reporter and sports editor. But perhaps his most notable role to a wider audience came in the unraveling of the 1990s scandal around long-time NHLPA executive director Alan Eagleson; Conway’s “Cracking The Ice” series of articles investigating Eagleson’s embezzlement of pension funds and taking of “fees” from disability claims was some of the reporting key to Eagleson’s downfall, and it was nominated for a Pulitzer Prize.

Conway later wrote the book Game Misconduct: Alan Eagleson and the Corruption of Hockey, which further helped illustrate the issues with how Eagleson ran the NHLPA. And the work he did on that front made an incredible impact for former and current players. The tributes to Conway (who was honored with the Hockey Hall of Fame’s Elmer Ferguson Memorial Award in 1999; he’s seen above at that award ceremony alongside Wayne Gretzky, who was inducted as a player that year) from players in an Eagle-Tribune piece on his passing illustrate what his work meant to many:

“It’s a sad day,” said [Bobby] Orr on Tuesday afternoon upon hearing the news. “He was a friend to all of us. He’s going to be missed.”

…“That was the thing about Russ, he looked out for the little guy, guys that were long retired and struggling,” said former Bruin Rick Middleton, whose number was retired last winter.

“He just cared about people,” said Middleton. “We respected him as players. But after I retired, he became a true friend. I love the guy.”

Here are some of the many tributes to Conway from journalists on social media Tuesday (including one from Canadian journalist and author Bruce Dowbiggin, who was also a key figure in the Eagleson reporting, and who collaborated with Conway on a series of articles in 1993):

Russ & I worked as closely as you can on for eight years. A phone call from him was a call to action. He taught me so much and was so loyal to friends— who seemed few when Eagleson was King. A legend and a pal. My life is richer for his presence and emptier at his passing. https://t.co/lSOlTKovp4

The fraud Alan Eagleson was brought down and charged by U.S. and Canadian authorities as a result of Russ Conway’s journalism. He was awarded Elmer Ferguson Memorial Award for journalists in the Hockey Hall of Fame in 1999. Condolences to friends and family of Russ Conway. https://t.co/1vjM1EnxcI

Russ Conway was one of my idols in the sportswriting business. His work exposing the corrupt criminal Alan Eagleson is a shining example of what this job ought to entail. R.I.P., Mr. Conway. https://t.co/9yWv8znyyL

Sorry to hear of the passing of Russ Conway, whose reporting on the business of the NHL and PA made a difference to generations of players.

That Eagle-Tribune piece also shows how admired Conway was in the auto racing community (he was inducted into the New England Racing Hall of Fame in 2006, a year after he retired as Eagle-Tribune sports editor), in the golf community (he took over the Greater Lawrence golf tournament and turned it into the Allan B. Rogers Memorial Golf Tournament), and in the rest of the local sports world. But his hockey work and his work on the Eagleson scandal particularly stood out, and it’s evidence of how dogged investigative journalism from even a small paper can make a huge difference. Our thoughts go out to Conway’s family and friends.

Correction: this piece initially had Conway involved in horse racing rather than stock car racing.