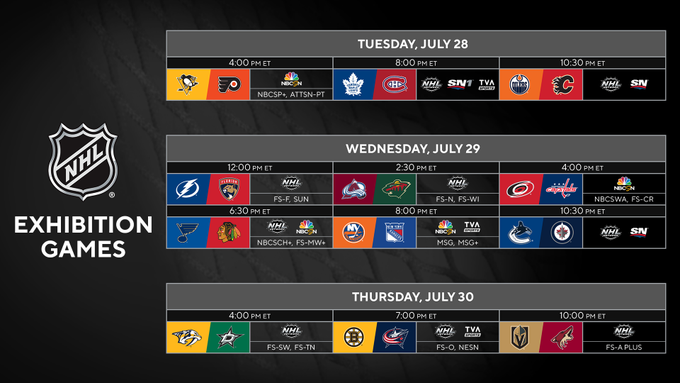 The NHL is unique amongst major North American leagues in having a more lucrative national TV deal in Canada than the U.S., and that also usually comes with more national TV coverage in Canada. But more of the league’s exhibition games this week will actually be televised nationally in the U.S. than in Canada, with NBCSN and NHL Network both going in hard on those and Rogers Sportsnet initially planning to only show games involving Canadian teams.

Update: This changed Wednesday, with Sportsnet One showing both the Carolina Hurricanes-Washington Capitals and the New York Islanders-New York Rangers game. Those games were not on their Wednesday schedule Tuesday. And as per Greg Shannon on Twitter, they also showed Blues-Blackhawks, which isn’t on their own schedule or third-party schedules. And as of Wednesday afternoon, Thursday’s games were still not on the published schedules for Sportsnet, Sportsnet One, or Sportsnet 360, but that doesn’t mean they won’t be added later.

Here’s a look at the initial schedule released Tuesday from Rob Williams of the Daily Hive, which had Sportsnet only showing two all-Canadian games Tuesday and one all-Canadian game Wednesday:

…so Sportsnet isn't broadcasting the first game today, nor at they televising 5 of 6 games on Wednesday or any of the 3 games on Thursday.

Only Canadian teams exhibition games being televised by the looks of it. Surprised they're not picking up the US feeds. https://t.co/iUhbzdfvZA

Even if you don’t count NHL Network, NBCSN had four games across Tuesday and Wednesday to Sportsnet’s three initial ones. (This gets better for Sportsnet if you include the two late additions to Wednesday’s lineup.) And if you throw in NHL Network, the picture gets even better for U.S. viewers, who can then view all 12 of these games (barring regional blackouts in favor of local RSNs). It’s remarkable to see U.S. networks providing more national coverage of hockey than Canadian ones, especially as the Rogers-NHL deal (2014-2026, $5.232 billion Canadian, currently $3.910 billion U.S. or $325 million U.S. per year) is more lucrative than the NBC one (2011–2021, $2 billion U.S., $200 million U.S. per year).

So what exactly compelled Sportsnet to not show the games involving U.S. teams? Their website’s TV listings only show their live games, but there are only a few of those. On Tuesday, regular Sportsnet (a national channel that’s made up of four regional feeds) had a MLB game between the Toronto (or is it Buffalo?) Blue Jays and the Washington Nationals at 6 p.m. Eastern, then the Edmonton Oilers-Calgary Flames NHL game at 10:30 p.m. Eastern, while Sportsnet One (a national overflow channel, similar to ESPN2) had the Toronto Maple Leafs and Montreal Canadiens at 6 p.m. Eastern. Before 6 p.m. ET, SN One had poker, while SN 360 had a replay of a 2019 NHL game.

Here's what @Sportsnet is currently airing. They really picked the 2019 Heritage Classic and poker over live hockey for the first time in 4.5 months??‍♂️ https://t.co/D5O7c3bXz4 pic.twitter.com/Ihbs9oatU0

While it makes some sense not to show part of the Pittsburgh Penguins-Philadelphia Flyers game and then have to cut away for the Jays or the Leafs-Canadiens game, their third national channel (Sportsnet 360, formerly The Score and an approximate equivalent to ESPNU or ESPNEWS these days) seemed available, as it only showed old replays and then the Tim and Sid talk show.

The programming decisions Wednesday and Thursday are even stranger. On Wednesday, main Sportsnet had Jays-Nationals again at 6 p.m. Eastern and then the Vancouver Canucks-Winnipeg Jets game at 10:30 p.m. Eastern. Sportsnet One’s initial plan was for the Colorado Rockies-Oakland Athletics game at 3:30 p.m. Eastern and a simulcast of the Canucks-Jets game at 10:30, and Sportsnet 360 had the San Diego Padres-San Francisco Giants game at 6:30 p.m. Eastern. There are no live sports at all interfering with the Tampa Bay Lightning-Florida Panthers game (noon Eastern), and the Colorado Avalanche-Minnesota Wild game (2:30 p.m. Eastern) easily could have been put on Sportsnet proper or Sportsnet 360, with neither having live sports during that time. Instead, Sportsnet proper is showing Sportsnet Central (their version of SportsCenter or SportsCentre), a replay of the previous day’s Leafs-Canadiens game, and Blue Jays in 30. But at least Sportsnet One eventually added Canes-Caps (4 p.m. Eastern) and Islanders-Rangers (8 p.m. Eastern), bumping Rockies-A’s for Canes-Caps.

Yes, these are exhibition games, and they’re not the most important thing in the world, and Sportsnet isn’t the only network that’s passed on some exhibition action recently. And yes, games with Canadian teams are clearly more important to a Canadian network. But even with games that don’t involve Canadian teams, there’s absolutely demand for them from Canadian hockey fans who haven’t seen new NHL action since March. And it seems particularly remarkable to not even show these games on channels that don’t have live sports at that time, and further so when you consider that Sportsnet is originating all the game feeds out of the Edmonton hub (NBC is doing the same out of the Toronto hub); they’re producing these feeds for U.S. networks, but not broadcasting them on their own networks?

But even beyond that, there’s absolutely an argument that a NHL exhibition game between two U.S. teams might draw more Canadian fans than a MLB regular-season game between two U.S. teams (not counting the U.S.-at-the-moment Blue Jays). Regardless of where you stand on how those numbers might wind up, though, it seems silly to not make both of those live games available and instead show a bunch of old games and studio programming. Sportsnet has a ton of channels and a ton of rights to sports content, but in the case of these NHL exhibition games, until Wednesday, Sportsnet seemed just be opting just not to show them when they only involve U.S. teams. And yes, NBCSN has it a little easier, as they don’t have a lot of other sports to show right now, but Sportsnet has enough channels that they could show these U.S. games if they wanted to. They’re just opting for studio shows and replays instead.

Fortunately for Canadian viewers, this will get better when the NHL kicks into meaningful action Saturday. All of those games will be shown on Sportsnet’s various channels (including CBC, where they have a deal), so the disparity will go away at that point (NBC, NBCSN, and USA will be showing all of the games in the U.S., albeit with those regional blackouts in place and with some games possibly joined in progress; even the joined-in-progess ones will be available in full on NHLN, though). But it’s remarkable to see more coverage of the exhibition games available on U.S. TV than Canadian TV. And it’s a reversal of how the NHL media picture usually plays out.