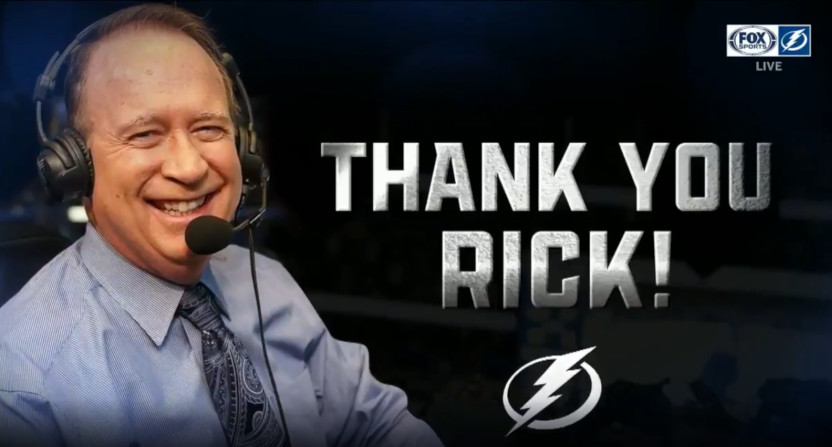 Since 1995, Rick Peckham has been the main television play-by-play broadcaster for the Tampa Bay Lightning, and he ended that run in style Wednesday. The first round of the NHL playoffs was also the last one with local RSN broadcasts, so it marked the last run on Fox Sports Sun for Peckham, who announced last September that he’d retire following this season. Well, this season wound up stretching out longer than anyone had anticipated, thanks to the NHL’s March pause, May season cancellation, and July resumption, but Peckham got to go out in style, with his final call being an overtime series-winning goal Wednesday in Game Five of the Lightning’s first-round series against the Columbus Blue Jackets:

The winning call by Rick Peckham!

“Out of the reach of Gavrikov, in front, Point’s alone, he SCOREEEEEESSSSS! Brayden Point has won the series for the Lightning! 5-4 in overtime! Brayden Point scores at 5:12 of the first overtime. Jon Cooper and Tampa Bay, moving on in the Stanley Cup Playoffs!” That’s a great final call. And it led to some lovely tributes to Peckham, including this one from Fox Sports Sun’s Lightning account of the on-broadcast tribute to him:

A toast to Rick Peckham and his 24 seasons of being the voice of the @TBLightning! #CheersToRick #GoBolts #GOAT pic.twitter.com/4Xw0pP5CQj

Peckham has been a well-known NHL figure for decades, calling games for the Hartford Whalers from 1984-95 then moving to Lightning broadcasts. He also did national NHL play-by-play for ESPN (1987-88), SportsChannel America (1988-92), and NBC/Versus/NBCSN (2007-20). He was honored with the Hockey Hall of Fame’s Foster Hewitt Memorial Award (given each year to a radio or TV broadcaster who has “made outstanding contributions to their profession and to the game of hockey”) earlier this year. And boy, did he find a good way to go out here.