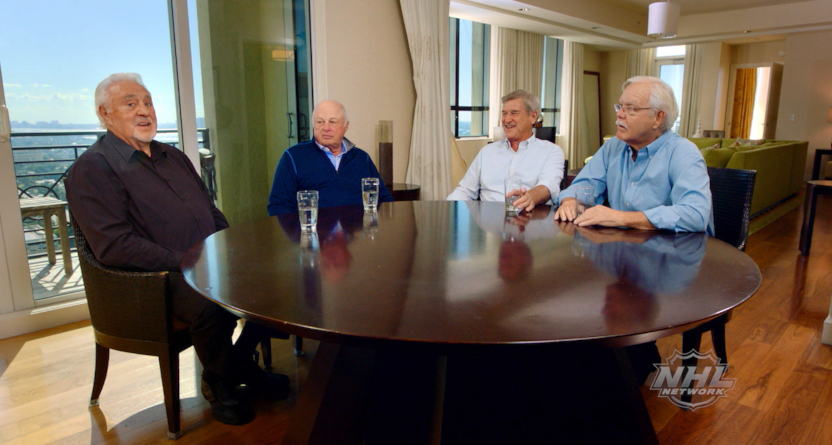 There have been some solid NHL Network Originals documentaries over the years, including Picture Perfect: The 1992-93 Season, Slap Shot at 40, Orchestrating An Upset: The 1996 World Cup of Hockey, and The First NHL Winter Classic: Hockey Goes Outside. The newest entry in the series is The 1970 Bruins: Big, Bad & Bobby, which will debut Sunday, May 10 at 8 p.m. Eastern on NHL Network, with that date marking the 50th anniversary of the 1969-70 Bruins’ Stanley Cup victory. And the documentary is a notable examination of that particular team and that particular moment in time.

This documentary oozes Boston right from the start, with the Dropkick Murphys’ Ken Casey narrating it and the featured interviewees from outside the Bruins’ world including actor Denis Leary (born in Worcester, MA), former NFL player and current NFL on Fox panelist Howie Long (born in Somerville, MA), ESPN NBA writer Jackie MacMullan (who went to school in Westwood, MA, then joined the Boston Globe in 1982 and spent over two decades there), and Mike Eruzione, captain of the 1980 U.S. Olympic “Miracle On Ice” hockey team (who was born in Wintrop, MA). The New England voices involved are well-chosen, and they all have notable stories about what it was like watching this particular team in this moment in time.

A few of those stories? Leary talks about camping outside the Boston Garden for tickets and discusses how basketball courts were converted to street hockey venues during this time. Long says “When you went to bed and you dreamed, it was all hockey. I never dreamt about football. I don’t know that I ever watched a Patriots game.” MacMullan says “I’m equated today with the NBA and basketball, I was playing street hockey all day every day. I didn’t want to play basketball, I wanted to play hockey! Why? Because I was watching the ‘Big Bad Bruins,’ and I wanted to be like them. They had captivated the entire city.” And Eruzione has a great story about the famous Bobby Orr flying photo, which we’ll get to in a bit.

So why was this team so captivating? Well, Big, Bad & Bobby does a strong job of illustrating that too, with a deep list of interviewees including coach Harry Sinden and players Orr, Phil Esposito, Derek Sanderson, Gerry Cheevers, Johnny Bucyk and Ken Hodge. Esposito, Cheevers, Orr and Sanderson are featured in a roundtable interview (pictured above, left to right) and that’s a great choice; it lets them bounce comments off each other, and one of them will often pick up a thread from another and run with it. It’s also interesting to hear what they have to say about each other, from Orr’s skills to Sanderson’s off-ice parties to the others talking about Esposito’s success against his brother Tony (a goalie for the Chicago Blackhawks) in the 1969-70 playoffs. This also sets up some great transitions, such as the four at the roundtable wondering why Sinden started Sanderson’s checking line in overtime of the fourth game of the 1970 Stanley Cup final, and a cut to Sinden’s response of “It was just a hunch.”

The documentary does a lot to explore how these Bruins were famed for so many different things, from Orr’s incredible ability to jump up into play and lead the rush (interviewee Thomas Whalen, author of the upcoming Kooks and Degenerates on Ice: Bobby Orr, the Big Bad Bruins, and the Stanley Cup Championship That Transformed Hockey, has a good line of “Bobby Orr rewrote what it was to be a defenseman”) to Esposito’s goal-scoring feats to players like Bucyk, Hodge and Sanderson who were able to beat opponents with both skill and size. Famed hockey writer Stan Fischler has a good line in here of “You’ve run out of ways to stop this team.”

Big, Bad & Bobby also goes into their off-ice exploits and appeal, particularly with Sanderson, who earned a lot of comparisons to Joe Namath and even owned a nightclub with him. Long’s line of “He could have been a Raider!” seems pretty fitting. And the archival footage of a woman in a bar saying about Sanderson “I think he’s a really groovy person, I really do” is just perfect. And there’s a fun line from Sinden of “I don’t want to talk about their business outside of the rink, but they had a lot of fun, let’s put it that way.”

This film does a good job of building throughout, too, starting with the Bruins’ time in the cellar, then moving through the talk of Orr (long before he even came to the NHL), the trade for Esposito and Hodge, the previous playoff disappointments, and then how everything came together in 1969-70. And it’s capped off with that memorable overtime Cup-winning goal from Orr, and a terrific discussion of the Ray Lussier photo that immortalized Orr flying through the air after he was tripped following the goal. Bucyk says “As soon as I saw the photo, I wanted one,” Long says “”Bobby Orr’s the only person other than my family up on my wall,” Eruzione says “Every New England bar has that photo. I have three,” and Whalen says “New England homes, frankly, you have a picture of Jesus, John F. Kennedy, and then that Orr photo.”

It should be noted that Big, Bad & Bobby isn’t really about the overall arc of the Bruins (they’d go on to win another Cup two years later) or of Orr (who’d find more success, but then battle injuries and eventually retire in 1978 at 30). Both of those elements are mentioned briefly, but this is very much a documentary focusing on this team in this specific year, similar to MLB Network Presents entries like The 1995 Mariners, Saving Baseball In Seattle. And the focus here makes a lot of sense; there’s a compelling story to tell about the Bruins’ first Cup since 1941, and about this particular team with this following and these personalities. As Long says near the end, “It was truly a team filled with larger-than-life characters, who on that one special year put it all together and captured the imagination of a city.” For those interested in those Bruins, and in a look back at some notable hockey history, this one’s a good watch.

The 1970 Bruins: Big, Bad & Bobby debuts Sunday, May 10 at 8 p.m. Eastern on NHL Network. The network is also running other special Bruins programming on May 10, including an hour-long edition of NHL Tonight at 7 p.m. ET and the championship film of the 1970 Bruins at 9 p.m. ET.