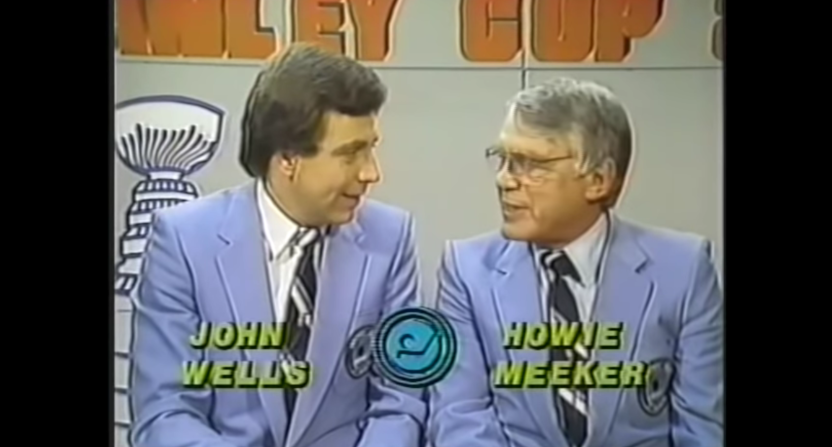 Today, the Telestrator (a device that lets operators freehand draw over still images) is common throughout sports, as well as on weather broadcasts and other applications. But it wasn’t always that way, and one of the figures who really helped establish it as a sports broadcasting concept passed away this week. That would be Howie Meeker, famed for his time as a NHL player (1946-53, all with the Toronto Maple Leafs), but also notable for his time as a politician, as a NHL coach and GM, as a youth instructor, and a broadcaster (with CBC’s Hockey Night In Canada from 1968-90, with BCTV’s Vancouver Canucks’ broadcasts from 1977-86, and with TSN from 1987-98; he was eventually inducted into the Hockey Hall of Fame in 1998 as a broadcaster). Meeker, who passed away at 97 Sunday, was a notable broadcaster on many levels, as detailed in an excellent The Province (Vancouver) tribute from Lyndon Little, but his work with the Telestrator particularly stood out:

During his many years as a broadcaster — primarily on Hockey Night In Canada but later on TSN and BCTV (Global) — Meeker became known as an innovator. He was the first colour man/analyst to master the telestrator, using it not only for goal replays but also to educate the viewers on the finer points of the game. He was the first to inform audiences not only how  a goal was scored but why — even if the key to the score occurred 40 seconds before the fact.

…“I did quite a few HNIC games with Howie, in fact we did the first NHL game from the new Saddledome in Calgary,” recalled Vancouver broadcast legend Jim Robson, a fellow Hockey Hall of Fame inductee. “Howie was quite a guy. A real character. He would go on about how we weren’t teaching the skills to our kids. Of course, he was the first to use the telestrator and that was his big thing.”

Richard Goldstein of The New York Times has more on that:

In his commentary for the CBC network during intermissions at N.H.L. “Hockey Night” games, Meeker was a pioneer in using a telestrator to diagram the action on instant replay segments. He ordered the technicians to “stop it right there,” one of his trademark phrases, so that he could draw lines or circles identifying players who were, or weren’t, playing the game the way he thought they should. His analysis provided insight that had seldom been offered to viewers.

And he did it with flash and passion.

“Nobody understood more about pizzazz and shazzam than Howie,” John Shannon, a former executive producer for the Saturday night telecasts, said in the book “Hockey Night in Canada: 60 Seasons” (2012). “Howie found a niche, created a brand.”

Here’s a look at Meeker’s Telestrator use during CBC’s coverage of a 1983 Edmonton Oilers-Calgary Flames game:

Beyond his pioneering work with the Telestrator, Meeker was remembered as an analyst unafraid to be critical, but one who backed that up. Little’s piece has more on that:

“You were never sure what he was going to say,” remembers [play-by-play broadcaster Jim] Hughson. “He could come up with something right out of left field. But once he said something he wouldn’t back away. And if he criticized a player he would be right down there in the locker-room area after the game to deal with any possible reaction.”

…“Howie’s two passions were hockey and teaching the game,” Hughson recalled. “He kept hammering away at how we were falling behind the Russians in teaching the skills to our youngsters. It was a message a lot of people didn’t want to hear, but he was right. When we lost our superiority it was a rude awakening. But Howie saw it was coming.”

And that piece even has a great anecdote from producer Larry Isaac about a time a Chicago Blackhawks’ player failed to show up for a scheduled interview on a BCTV Canucks’ broadcast:

“I could see the empty chair beside Howie and knew the player hadn’t showed,” relates Isaac. “I went to Howie hoping he could fill the time himself. What he did was conduct the whole interview as if he knew what the player was going to say. After asking a question he’d move over to the player’s chair and give an answer.”

Meeker was a legendary figure in the Canadian hockey world, and that went well beyond his playing career. His Howie Meeker’s Hockey School aired on CBC from 1973-77, teaching aspiring hockey players basic skills. And he lived in Newfoundland for 25 years, boosting hockey programs there at the request of premier Joey Smallwood. But his broadcasting career is particularly notable from this site’s perspective, both when it comes to his willingness to be critical when deserved and when it comes to his early use of a Telestrator and replay to really break things down. He was a legend, and he’ll be missed.