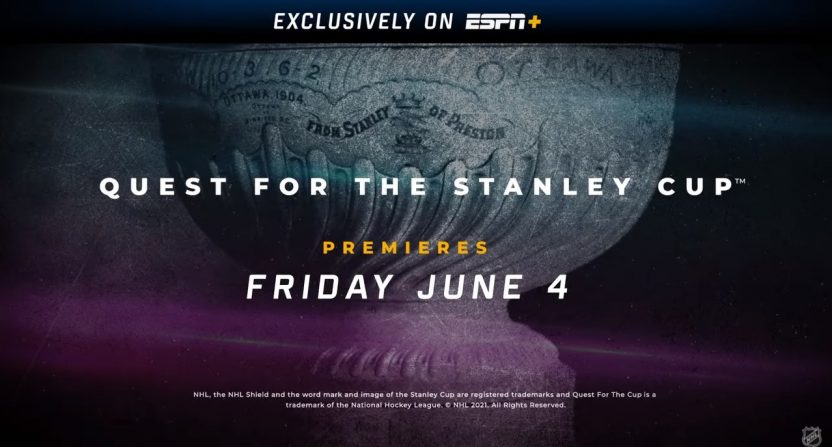 For the fourth straight year, the NHL’s Quest for the Stanley Cup docuseries will air on ESPN+.

On Wednesday, the NHL released the trailer for this year’s edition, which will focus on the eight teams remaining in this year’s Stanley Cup Playoff (sorry, Leafs fans).

And here’s a brief description, in case you’re unfamiliar with the series.

Through seven, 30-minute episodes, the two-time Sports Emmy Award-nominated series will take viewers inside the Second Round, the Semifinals and the Stanley Cup® Final. In each episode, cameras will lead fans through the action on the ice, on the benches, in the dressing rooms and into the home lives of players and members of the coaching staff. The documentary series will provide fans with an all-access pass to each team’s exceptional journey through the 2021 Stanley Cup Playoffs in the pursuit of the Stanley Cup – the hardest trophy to win in professional sports.

Beginning on Friday, June 4th, a new episode of Quest for the Stanley Cup will premiere each Friday at 6 PM ET for seven straight weeks, commencing with the season finale on July 16th. Canadian fans can watch the series on the NHL’s YouTube channel.

The NHL has had a relationship with ESPN+ for years (and this series moved away from Showtime to ESPN+ back in 2018), so it’s important to note that the placement of the series on ESPN+ isn’t because of the league’s new deal with ESPN. But I do think that we’re going to see a lot more non-game/studio NHL content on ESPN+ as part of the new deal, despite nothing explicitly being spelled out. We’ve seen it with ESPN’s other TV deals, and I’d assume the NHL would be no different.