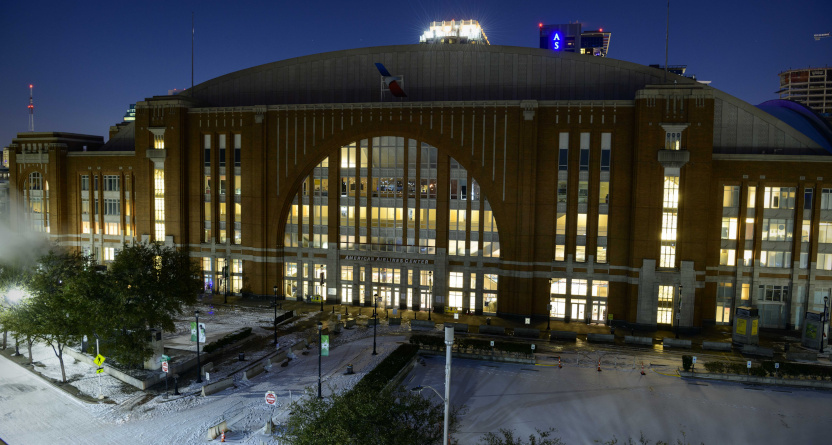 The NHL has had a lot of games postponed over the past months, but those have usually been about COVID-19 outbreaks. On Monday, the league had a game postponed for another reason; a weather-related state of emergency in Dallas, as winter storms and bitter cold temperatures there (which have hit a lot of the country, but have been particularly out of the norm in Texas) have led to significant power outages from an overloaded grid, with an estimated 4.3 million people without power across the state as of Monday night.

With the Nashville Predators already in Dallas to play the Stars, and the officials already present as well, the NHL initially planned to go on with that game at 7:30 p.m. Central. However, that drew significant criticism as a use of power given the power outage challenges many Texans are facing. And an hour before puck drop, the NHL and the Stars made the decision to call the game off after consultation with the mayor’s office, which has declared a state of emergency. As Sean Shapiro of The Athletic noted, though, that late move proved unfortunate for players, who were already in the locker rooms at the American Airlines Center (seen above Monday night) and dressed for the game:

Been told that with the timing of the decision players were already in locker room dressed for game when told it was being postponed https://t.co/tDu8z4Tcmv

As pre Matthew DeFranks of The Dallas Morning News, this may also lead to Tuesday’s planned game between the teams getting postponed:

The Stars and Predators are scheduled to play Tuesday night, but Tristan Hallman, the spokesperson for Mayor Johnson, said “if it’s the same situation, power-wise, we’ll ask them to not have the game tomorrow either, postpone it.”

…The American Airlines Center is on the critical infrastructure grid, according to Hallman, the same grid that powers the convention center and area hospitals.

“We need those up,” Hallman said. “I don’t know the status of that grid, but frankly, the Stars game is not critical infrastructure. It’s just not.

Given that the American Airlines Center is on the critical infrastructure grid, the Stars were told that Monday’s game would not take power away from people in the City of Dallas, Stars CEO and president Brad Alberts said. Alberts said that if the game would have caused residents in Dallas to lose power, the game would not have been played, a decision that could have preempted Mayor Johnson’s request.

The eventual decision here seems to make a fair bit of sense. An arena needs quite a lot of power for a game, and if the grid is seeing too high demand, it seems like this is something that can be shut down and rescheduled without too many problems. But, interestingly enough, while a postponement was considered earlier in the day, the team initially tried to go ahead (albeit with “reduced” power usage):

According to Dallas Stars president/CEO Brad Alberts, there was consideration given to not playing tonight against the Predators. AAC general manager Dave Brown said the arena will take measure to reduce power usage in multiple avenues. The game is expected to be played.

It’s somewhat understandable why the team initially thought they could proceed, as they were told that “Monday’s game would not take power away from people in the City of Dallas.” It’s not necessarily possible to shift the power saved at the AAC to the households facing outages considering the different grids. And there is some pressure for the Stars to play whenever possible; they already had to postpone four games over COVID-19, and with so many teams dealing with outbreaks, the NHL’s schedule is in a lot of chaos.

But with the extremely cold temperatures, the other more critical infrastructure on that grid may face its own power demands. And the point Hallman makes about people across the region watching a game if it is played (and using power to do so, and thus stressing those other grids further) seems like a valid one. And using a lot of power for a NHL game while there are more critical needs and a state of emergency on seems like a bad idea. (For the record, this appears to be the only pro sports game that was set to be played in Texas Monday; the NBA’s Dallas Mavericks played a home game at the AAC Sunday, but that was before the power crisis got this bad, and they now don’t play again until Wednesday, while the Houston Rockets are on the road in Washington, and the San Antonio Spurs are currently shut down due to a positive COVID-19 test and contact tracing.)

So the end decision here seems to make sense. But it feels like it would have worked a lot better for everyone if the Stars, the mayor’s office, and the league office had been on the same page, and if they had gotten to that page earlier than an hour before puck drop.