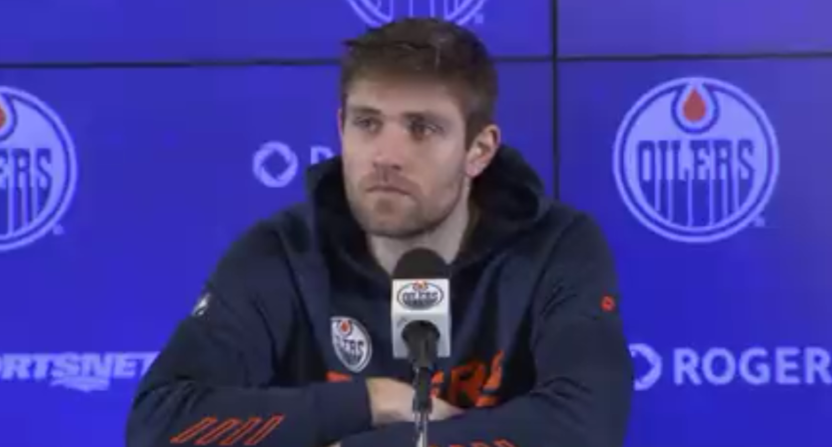 There have been quite a few cases of reporters’ questions at a press conference bothering the athlete or coach at the podium. But few of those questions have involved a “Why are you so pissy?” That’s what Jim Matheson of Canadian newspaper chain Postmedia said to the Edmonton Oilers’ Leon Draisaitl Tuesday, though, after Draisaitl declined to give Matheson much of an answer to his question about if there was one particular thing the team was doing wrong. Here’s the video, via Sportsnet’s Tim and Friends show:

Watch Leon Draisaitl get into it with HHOF reporter Jim Matheson ?#Oilers pic.twitter.com/KsoN8KKqWR

Matheson: “Lots of reasons for why the Oilers are playing the way they are in terms of winning and losing. What do you think is the number-one reason for the losses? Is there one thing, in your own mind, where you’re saying ‘We’ve got to get better at that?'”

Draisaitl: “Yeah, we have to get better at everything.”

Draisaitl: “No. You can do that. You know everything.”

Matheson: “Why are you so pissy, Leon?”

Matheson: “Why are you so pissy?”

Matheson: “Yeah, you are. Whenever I ask you a question.”

Draisaitl: “I gave you an answer.”

Matheson: “Not a very good one.”

Matheson: “I have one more for you, Leon. You’re showing your frustration on the ice, last game against Ottawa. Is that a good thing when you show it, so the other team knows you’re frustrated?”

Draisaitl: “Yeah, it’s a good thing. For sure.”

Draisaitl: “Yeah.” [Gets up and walks away.]

Matheson has been covering the Oilers since 1973, when they came to town as a World Hockey Association team, and he received the Hockey Hall of Fame’s Elmer Ferguson Memorial Award (presented to one columnist or reporter annually) in 2000. But that doesn’t make him immune from criticism or pushback; his career is worth noting, but so are his current actions. And just because you’ve done something for a long time doesn’t mean you can’t be criticized for how you’re currently doing it.

And it’s somewhat funny that a lot of the discussion here (especially from veteran writers and columnists) is painting Draisaitl as “immature” and “dismissive” and Matheson as a “pro’s pro.” Draisaitl did actually answer the questions (and in a more substantive way than even a Marshawn Lynch “I’m just here so I don’t get fined,” which also would have been acceptable), and did more there than he was obligated to do. (He easily could have just said “No comment,” which would have been even less useful for the presumed critical piece Matheson was looking for here.) And it’s notable that Matheson’s last published piece was headlined “If Oilers don’t show up for battle against Florida, it will get ugly,” with his previous one being “This is as low as it gets for Oilers, blowing game to Senators.” Huh. Shocking that Draisaitl isn’t thrilled to hear from that guy.

And it was Matheson who dropped the “Why are you so pissy?” Normally in the case of a media-sports figure dustup, it’s the sports figure using the colo(u)rful language, but not in this case.  We certainly don’t have a problem with colorful language in this corner, but it’s interesting that the guy using “pissy” after he doesn’t get the response he’s fishing for is held up as an example of a “pro’s pro” and the guy who did the media relations part of his job and answered multiple questions from someone he seems not to like (and quite possibly for good reason) is branded “immature.” Granted, those are takes coming from long-time members of the media who have every reason to support Matheson rather than take an objective view of the situation. But their takes should not be seen as gospel here.

At any rate, there are certainly issues with the Oilers. They’re 18-15-2 on the season, sixth in the West Division (ahead of only the dismal Vancouver Canucks and the expansion Seattle Kraken), and they’ve lost their last six games since beating the Kraken on Dec. 18 (albeit with two of those losses coming in overtime and earning them a point each). Amidst that, it’s maybe understandable why Matheson would ask if there’s one particular thing that stands out to Draisaitl on what’s going wrong. But the doubling down on it after Draisaitl offered a limited response is interesting, as is calling him “pissy” for not feeding Matheson’s particular narrative of what’s going wrong with the team. If that’s “a pro’s pro,” perhaps we could use some better pros.