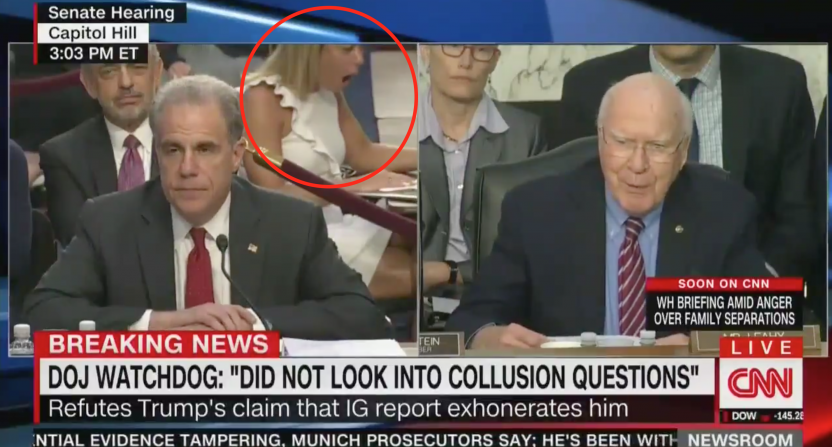 Washington Examiner reporter Kelly Cohen will probably always remember where she was when she found out Washington Capitals coach Barry Trotz had resigned following his team’s Stanley Cup title.

She was on Capitol Hill, reporting on a Senate hearing about the inspector general’s probe into the FBI and Hillary Clinton. And she absolutely could not contain her shock, despite sitting in full view of the CNN cameras.

And here it is, the moment @politiCOHEN_ finds out Barry Trotz resigned pic.twitter.com/Y38VwRdkrf

Cohen quickly tweeted about her “silent meltdown,” only to find out America had already witnessed it on live television.

Cohen told the Washington Post that she was in the process of writing a story about the Senate hearing when she learned of Trotz’s firing but that she couldn’t help but react dramatically.

“I don’t know why my reaction was so dramatic,” Cohen said with a chuckle, one of many she would offer while discussing the unexpected moment that quickly went viral.

Cohen said she was “literally in the middle of writing a story” about the Senate inquiry, which was relatively short on “bombshells” and thus had her in a more relaxed state than she would have been if the hearing had featured more “fireworks.” In fact, Cohen had already fielded texts from friends about how she “looked so happy and smiley” on TV when she learned of Trotz’s departure.

When a friend first texted her with the news, Cohen said, she thought, “No way,” but when she saw statements from the ex-coach and the team on her laptop, she thought, “Oh, wow, holy crap, it’s true.”

“Obviously you can’t really talk out loud, because the director of the FBI is probably speaking, and top senators are speaking,” Cohen said. “So that’s why I had to have that little silent meltdown, which obviously now is not that silent.”

In Cohen’s defense, Trotz’s resignation days after the Capitals’ victory parade was quite shocking. But maybe next time she’ll be just a bit more aware of the cameras.