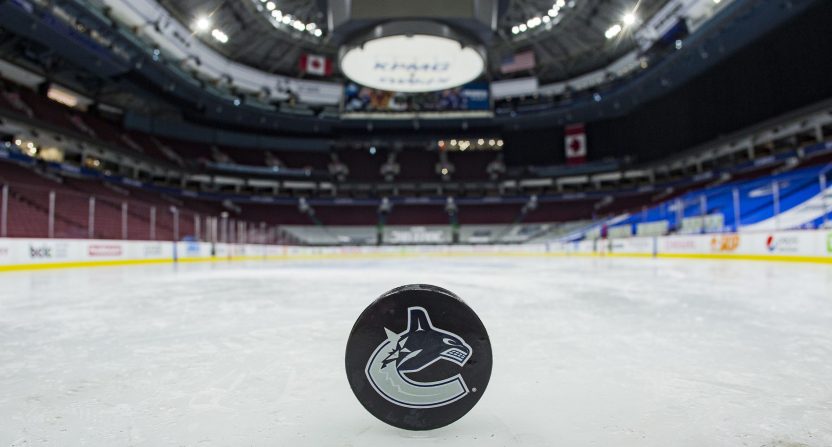 It has been a scary few weeks for the Vancouver Canucks as they attempt to get through a COVID-19 outbreak that has made its way through 26 members of the franchise (including 22 players). The NHL franchise hasn’t played a game since March 24 and while there are hopes that they’ll be able to return to the ice safely soon, the number of players in COVID-19 protocols, the lack of practice time, and the ongoing potential for further positive tests have made it a particularly trying and troubling time for those in and around the team.

Vancouver was initially expected to restart regular-season action on Friday against the Edmonton Oilers. However, when forward J.T. Miller called that plan “dangerous to a lot of players” on Wednesday, that got everyone’s attention.

“I don’t really feel ready at all, if I’m being completely honest,” Miller said. “We’ve tried to talk about the number one priority [being] the players’ health and the families’ safety, and it’s almost impossible to achieve that with what they’ve asked us to do here on our return. I can’t speak on behalf of the guys that have had COVID, but I’ve talked to my teammates a lot, and this hasn’t obviously been that easy.”

That began a conversation between Canucks’ players, their management, the NHL, and the NHLPA, which culminated in the game being called off by the league on Thursday.

The Canucks’ game against the Toronto Maple Leafs, which was originally scheduled for Saturday, is currently slated for Sunday. It remains to be seen if that game will be played, though it’s worth noting that both teams still had multiple players on the COVID protocols list as of Friday evening.

Also noted that Schmidt and Virtanen will remain in protocol (that's just based on timelines) https://t.co/8o5oTFS7rK

The situation remains very fluid and the franchise clearly wants to put a lid on the outbreak and take all the precautions it can to protect players and staff from further infection. One side effect of those efforts is that, as of Thursday, the Canucks closed practices to all non-essential people, which included local media members. A big part of this change was in response to Miller’s comments and other discussions with the players.

Canucks players had a Zoom call with NHLPA last night. Obviously some concerns from some about being ready to play Friday-Saturday. Medical testing for some players before practice today will be an important factor in what comes next. Fluid situation to be sure.

While the closures and lockdown to essential business make a lot of sense, this is where the concerns of the pandemic brush up against the requirements that exist between the league and members of the media. This is why the Vancouver chapter of The Professional Hockey Writers Association released a statement on Saturday admonishing the Canucks over their decision to hold closed practices without media members, which violates the NHL’s media regulations.

Chapter Chair Patrick Johnston, who covers the Canucks for Province Sports and the Vancouver Sun, posted the statement on his Twitterfeed.

Statement from the Vancouver chapter of @ThePHWA about the Vancouver Canucks' decision to hold closed practices ahead of their return to play in violation of the NHL's own media regulations. pic.twitter.com/mD8rPiEmSZ

“For three days the Vancouver Canucks have been in violation of the National Hockey League’s media regulations, which are codified in the collective bargaining agreement between the league and its players.

Simply put, when the team practices, media are to be allowed to view the practices.

The Canucks have not been allowing media to view practices, claiming privacy concerns, also suggesting that media would not be taking into consideration the difficulty the team’s players might be having in recovering from COVID-19, which recently infected nearly every player on the team.

Such an implication is insulting, especially given Vancouver media was united in its criticism of the return to play schedule the league was originally asking the players to undertake, with a minimum of practice time before playing two games in two nights, all coming on the back of the players being off the ice for nearly two weeks while they recovered from a devastating respiratory illness.

The Vancouver media, suffice it to say, has a great deal of sympathy for the players and the demands that are being placed on them.

…It is also important to note that the presence of a PWHA member at a practice at the start of the outbreak is a key reason why the story has been told accurately from the beginning.”

The situation is very similar to the one that occurred last July when the NHL announced that only three league-employed media members would receive access inside the NHL bubble when play resumed during the pandemic. The Professional Hockey Writers Association, Associated Press, and Associated Press Sports Editors all objected to the NHL’s policies at the time.

Just as it was then, it’s easy to see both sides here. The Canucks are in the midst of a brutal outbreak and players have voiced serious concerns about their health. The desire to lock things down to bare minimums and over-protect everyone feels vital. And if you let in extra people from one area, you have to start considering letting in people from other areas, and then you feel like you’re back where you started.

On the other hand, independent media access is the cornerstone of how things are supposed to operate. And as noted in the statement, having a professional journalist inside to document the situation means the truth is reported and everyone’s bases can be covered (assuming you have nothing to hide). Barring journalists from covering your organization, whatever the situation, is an iffy proposition.

“If I could tell the people of B.C. something, it’s to listen to the health authorities. It’s not time to loosen up. It’s time to do the right things. You don’t want to get this, it’s not a joke. Don’t let your guard down.” – Coach Green

Media members are still getting access to players and coaches via Zoom press conferences, and they’ll get the opportunity to speak with them after Sunday’s game if it happens. It remains to be seen if media members will be allowed back into facilities soon. Not to mention that the larger conversation is still being had over whether or not the league and franchise really need to rush back to playing games at all.

In the meantime, the message is clear that the Canucks are doing what they think they need to do to protect players and staff while also getting games going as quickly as possible, even if it violates their requirements with the local media.