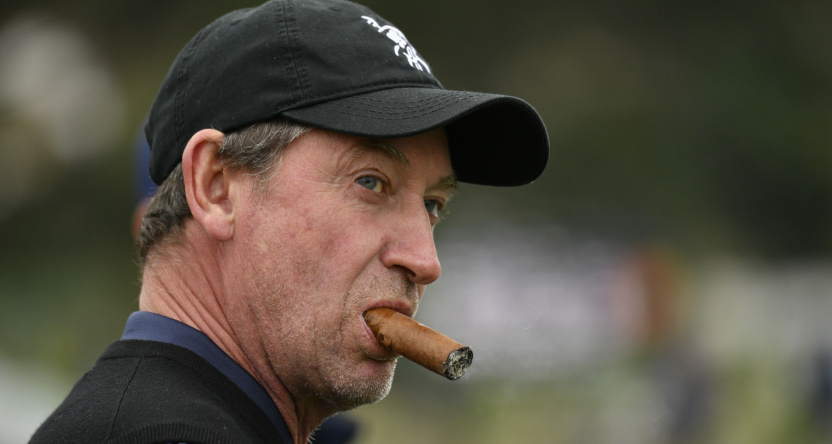 The one thing retired professional athletes almost unanimously say they miss most about their playing days is the camaraderie that comes with being part of a team.

For Wayne Gretzky and Paul Bissonnette, it sounds like they’ve rekindled a bit of that comradeship at Turner Sports. Gretzky (seen above at the Pebble Beach Pro-Am in 2020) was announced as part of the new NHL on TNT studio show this season and even though he wasn’t a weekly panelist, the legendary hockey player still seems to fit right in.

Bissonnette, a former NHL player who hosts the popular Spittin’ Chiclets podcast, joined The Pat McAfee Show this week and offered a glimpse of what it’s like sitting next to The Great One on TNT.

"Working with Wayne Gretzky is a dream come true.. he's everything I expected & more" ~@BizNasty2point0#PMSLive pic.twitter.com/0CmhQklZ0i

“After these broadcasts some nights we go to Wayne’s room until 4 or 5 in the morning,” Bissonnette told McAfee. “This guy is the BIGGEST guy’s guy. He will crush beers, he will tell me all these iconic stories and backstories.”

When Gretzky joined the NHL on TNT last year, it was somewhat surprising considering his fame and iconic status. You wouldn’t expect to see Turner hire Michael Jordan for Inside the NBA. Then again, no one expected Tom Brady to have a future in broadcasting either. But credit Gretzky for not seeking superstar treatment and instead being “one of the guys.”

“It’s the biggest dream come true,” Bissonnette said. “And that alone is incentive enough for me to fly out here once a week or twice week and do this gig, just to hear these behind-the-scenes stories of the greatest hockey player of all time.”

Bissonnette narrowly missed out on getting to know Gretzky more than a decade ago, with the hockey player joining the Arizona Coyotes shortly after Gretzky departed the franchise as head coach.

But during his time with the Coyotes, Bissonnette said he became friends with Gretzky’s sons, who were attending ASU at the time. And according to Bissonnette, he has Gretzky’s kids to thank for helping him land the broadcasting gig at Turner.

“They actually vouched for me,” Bissonnette said. “And told him when he got the TNT gig ‘Hey you gotta make sure you get Biss on, he does Spittin’ Chiclets, I think it will help the broadcast,’ so Wayne ended up putting in the good word and then it all worked out…everything I’ve expected and more. He’s been so kind to me.”