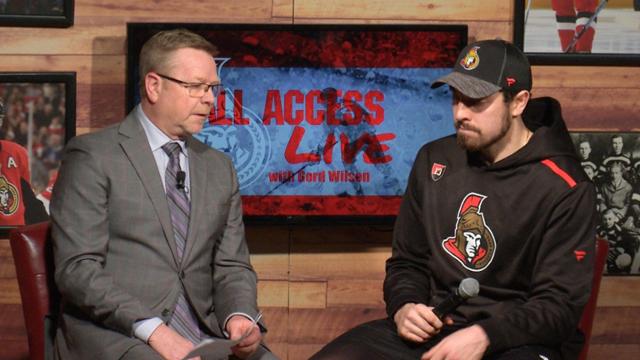 Several broadcasters have been diagnosed with the COVID-19 coronavirus, and the latest is Ottawa Senators’ radio analyst Gord Wilson. The 59-year-old Wilson is currently the regular analyst for Senators’ radio broadcasts on TSN 1200, and he’s been working as a Senators’ radio and television analyst since the team entered the NHL in 1992 (plus as the host for many of the team’s Sens TV digital segments, like the January interview with forward Nick Paul seen above). But he’s now battling COVID-19; he wasn’t feeling well for days following the Senators’ road trip to San Jose, Anaheim and Los Angeles from March 6-12, went to get tested, and received a positive diagnosis Friday. Wilson spoke to Bruce Garrioch of The Ottawa Sun about how this has affected him  (and his wife, CTV Ottawa’s CTV Ottawa’s Patricia Boal) so far:

“It’s hit me hard enough,” Wilson said from the couple’s Ottawa home where he’s been staying in a bedroom away from his family and eating meals separately. “I haven’t felt good for two weeks. The worst was last weekend. So I’m hitting a week here at least with shortness of breath and feeling lethargic. I walk up a flight of steps here and I’m out of breath.”

“The biggest thing is the lack of taste and smell. I’m down about eight or nine pounds. I’m not eating as much.”

…“I haven’t slept in the afternoon as much in my life as I have in the last two weeks,” Wilson said. “Public health told me the virus sticks around. It’s not been fun.

Wilson marks the third person from the group of 52 that was on the Senators’ flight back from California to test positive for COVID-19. Two unnamed players had previously tested positive, and are self-isolating as per the team. That latter release (from last Saturday) indicated that eight people on the flight had been tested for COVID-19; it’s unclear if that group of eight they mentioned included Wilson or not.

Wilson’s story is further proof of how differently the virus can attack different people. Some, like ESPN analyst Doris Burke, have spoken to mainly feeling headaches and lethargy, while others, like NFL Network producer Jason Hartelius, have reported fever and difficulty breathing. And others still like Wilson have spoken to a lack of smell and taste in addition to breathing troubles. That speaks to why it’s important for people to talk about what they’re going through with this; it might help someone else realize they have the disease.

This has certainly had a significant effect on Wilson, and his comments are also notable for illustrating just how dangerous this virus is and the effects it can have. But he’s staying positive despite this:

Hey- just a quick response to all who have reached out with well wishes. All are very much appreciated. Update is- still in symptomatic stage so just continuing to wash my hands, and ride it out. 🙂 Stay home.
Stay healthy! Cheers. Gw

Our thoughts are with Wilson and his family through this.

[The Ottawa Sun; screengrab via NHL.com]