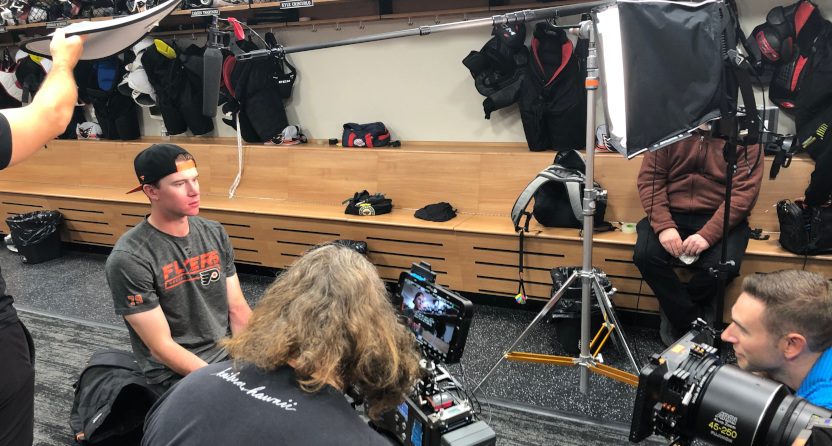 The NHL Network all-access training camp show Behind The Glass is back for a second season, this time focusing on the Philadelphia Flyers. The first episode premieres on NHLN Wednesday night at 8 p.m. Eastern; AA saw that episode in advance, and then spoke to coordinating producer Jed Tuminaro and senior producer Andrew Brenner about the episode and the series as a whole. Tuminaro said their goal is to try and illustrate what’s going on for the Flyers’ players, especially in a year where they have a relatively-new general manager in Chuck Fletcher (who was named to that position last December) and a new head coach in Alain Vigneault (who was hired this offseason).

“First and foremost, it’s just to try to be as real as we can be with this and just show what life is really like with these guys and show how it’s unfolding. And also establish, which hopefully we did well in the first episode, is that it’s sort of an exciting time there with a new regime and some new faces. It’s obviously an iconic franchise with a passionate fan base. You know, all teams usually have excitement in training camp, but I think it’s a tangible thing there, and we’re just
trying to showcase that as much as possible.”

This is the same NHLN team that worked on last year’s Behind The Glass with the New Jersey Devils, and Brenner said last year’s show taught them the importance of staying flexible in which players they focus on.

“I think what’s interesting is specifically as we follow and document the stories of some of the prospects that are battling for spots, I think what we learned last year with the Devils is that it changes so much on a daily basis. You go in there with an outlook of ‘All right, these are two highly-coveted guys in the organization and we’re going to really focus on these guys,’ and then they’ll play a good game or a bad game, and then two days later it’s a couple guys you haven’t even heard of that are on the radar. So I think knowing the way it went last year with the Devils, it’s allowed us in the field here to just always kind of keep our eyes open on guys that aren’t necessarily on our radar that could kind of sneak up on you a little bit.”

Of course, while stories of unexpected players who turn out to shine are great, many viewers are also interested in seeing more behind-the-scenes looks at established players like captain Claude Giroux, goalie Carter Hart (seen above during the taping of an interview for the show), and free agency addition Kevin Hayes. All of those players are featured prominently in the first episode as well. Tuminaro said finding that balance is a key goal for Behind The Glass.

“One of the biggest challenges with these is that you try to show a lot of times the compelling drama or the kids, and the people trying to make the team, whether it’s a veteran or a kid, but then you’ve got to take a step back and know ‘Who are the core people that the fans of the team really want to see?’ I think the best way we can strike that balance is just executing it the best way with what we see unfolding, but then kind of taking a step back and just making sure we are including the people that everybody wants to see.”

“And sometimes that’s maybe in the edit room, ‘A little more of this, a little less of that.’  Time is always a factor in these shows; it seems to fly by with these half-hour shows, but it’s sort of just putting together the best content and then trying as best we can to assess it in the rough cut stage to make sure that that balance is there by the end of the show.”

A key question with access shows is how much access they actually get from the team. For example, access restrictions from the Oakland Raiders, especially around showing coaches’ meetings and personnel deliberations, were seen as a shortfall in this season’s Hard Knocks. It’s early on with Behind The Glass, but the first episode’s promising on that front; it has multiple interview clips with Fletcher and Vigneault, and perhaps most importantly, it ends with footage of a team meeting where coaches and personnel staff are candidly evaluating a couple of players. Brenner said the Flyers have been quite cooperative so far on the access front.

“Obviously with an access show, you want to have access. It’s working out great; whatever show you work on, there’s going to be a give-and-take, but I think what I think what we’ve experienced so far in our time on the ground with the Flyers has been great in terms of letting our cameras in places where they’re going to give viewers and fans an opportunity to see things they wouldn’t normally see. It’s nice to see Chuck or AV in a sit-down interview, but seeing them in that meeting scene at the end of the show, where you’re really being a fly on the wall to what these guys are actually talking about, has been a welcome surprise there so far, seeing how welcoming they are to that.

“And as you’ll see going forward in this show, we’re going to be in other places with these guys where fans don’t normally see cameras. Right now, we’ve been given access, we’ve been allowed in on those meetings, and we’ve been given the opportunity to showcase some real true conversations in terms of evaluating guys that are trying to make it. They know that what they’re saying could be used in the show. …I just know from what we’ve experienced in our time here that they’re speaking pretty openly and pretty freely.”

Another interesting moment of access in the first episode comes from an injury to Kurtis Gabriel. The cameras are able to follow him as he’s helped down the hallway, but they stop at the doorway to the training room; however, audio of Gabriel’s conversation with the trainer is still broadcast. Brenner said that was a compromise that worked for both sides.

“It’s part of the give and take. …It just worked out that Kurtis Gabriel happened to be wearing a mic for that game that night, so we’re picking up this incredible conversation. But the actual inside of the medical room is sort of a sensitive area where they want the trainer and the player working together. So we go as far as we can with that; we take him in, you hear the audio, we’re still broadcasting the audio, but we let the trainers do their job inside.”

As for what’s ahead for Behind The Glass, further episodes will follow on Monday, Sept. 30 (8 ET), Monday, Oct. 7 (10 ET), and Monday, Oct. 14 (8 ET). Tuminaro said that viewers should expect to see the intensity of the competition for jobs ramp up as roster deadlines get closer.

“The access and the storylines will all continue, but one thing I think we’re already seeing for show two which should make for a compelling watch is that overall the atmosphere in the camp is just starting to intensify a little bit as things pick up. The first show, as is often the case in these access series, is a little introductory; you meet your people and you get things going. I think the action always seems to pick up as things progress, the games tend to mean a little more. Albeit it’s still
preseason, but evaluations, who are going to be some of the people that remain with the team, who are maybe going to be some that are going to go?”

“You just delve into it a little more, things matter a little more, the stakes are a little higher, and that seems to progress as the series goes along. So that’s going to be something that comes forward in the show as well. And without getting into too many specifics, there will be see some new characters introduced and some off-ice things that we’ll see which I think will be entertaining.”

Brenner said the team’s poor early preseason results have also contributed to a shift in the atmosphere, which he thinks viewers will see in future episodes.

“I think they’ll definitely notice a change in the urgency there. As the Flyers got camp underway, the first three games they were winless. And you think ‘It’s preseason, is it that big of a deal?’ But you’ll see there’s a change in tone, a change in sort of the way things are approached here from the coaching staff that’ll be noticeable in the shows going forward.”