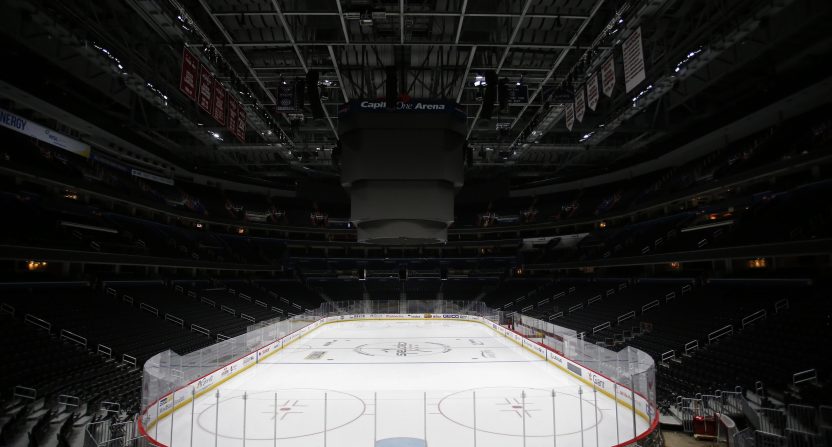 It doesn’t appear that we’re going to be learning the NHL’s next television home until sometime in 2021.

According to a report from the Sports Business Journal, the NHL is halting all negotiations regarding its next rights deal until the end of 2020. More specifically, they’re waiting for the NFL to get their rights deals done. To date, the NFL has only re-upped with Amazon for another three years, while ESPN (expiring after the 2021 season), CBS, Fox, and NBC (all of which expire after the 2022 season) have still not been renewed. All (understandably) want to remain in business with the NFL going forward.

As for the NHL, the league’s relationship with NBC will celebrate its 15th anniversary in October, and the ten-year, $2 billion contract between the two parties will end after the 2021 season. NBC wants to remain in bed with the NHL (and reportedly has a right of first refusal clause with the league), but ESPN and Fox have also reportedly been interested in picking up NHL rights for several years.

Three years ago, ESPN’s John Buccigross raised the possibility of the network getting back into broadcasting NHL games, with the league potentially splitting its package. SBJ reaffirmed that idea today, claiming that the league wants to cut deals with “at least two television networks and, potentially, a tech company.” This would allow the NHL to more closely resemble other American sports leagues, as the NFL, MLB, NBA, and MLS (along with various college conferences) all have deals with at least two TV networks.

The NHL’s decision to push back its negotiations has a few benefits. If one of the potential partners doesn’t spend as much on the NFL as they expect, they could have extra money to throw at the NHL. Networks also could have less cash flow problems later this year or early in 2021 if the COVID-19 pandemic begins to slow.

To me right now, it seems like the early favorite to make a strong play for the NHL (along with NBC) is ESPN. With apologies to hockey fans that have added Max Kellerman to their shit list, ESPN has several things going for it in regards to a potential deal with the NHL. MLB’s renewal with Turner Sports over the weekend, combined with its renewal with Fox nearly two years ago, has seemingly limited an expanded (vastly more expensive) MLB package for ESPN. That would free up some cash for other properties, like the NHL. ESPN also has the most to gain with a new NFL rights deal, as it is seeking more games than just its MNF package and one Wild Card game. If it fails to negotiate a better package, the amount of money ESPN will be paying to the NFL could be less exorbitant, again opening the door for that money to be spent elsewhere.

As for Fox, the other rumored contender, they have not only agreed to the new TV deal with MLB, but also are locked in to Thursday Night Football through 2022 (which they’d probably look to renew, because football) and have to agree to a new NFL deal for Sundays and the playoffs, which will not be cheap.

If you want a dark horse candidate how about CBS? The network has some extra cash in its pocket after losing the SEC’s premier package to ESPN, and they’ve bolstered their sports content with last fall’s surprising pickup of the rights for the UEFA Champions League, beginning in the fall of 2021. The NHL likely wouldn’t be too thrilled with games on CBS Sports Network or CBS All-Access, but weekend games in the winter on CBS’s broadcast network would be an interesting outcome.

Whatever happens, we’re probably not going to learn about it until next year. Because the deal is likely going to be with multiple partners, the NHL is likely going to be bringing in far more than the $200 million a year that NBC has been paying on average over the last decade. When it comes to the future of hockey in the US, that can only mean good things going forward – even if the NHL ends up on a network where talking heads bash their sport.